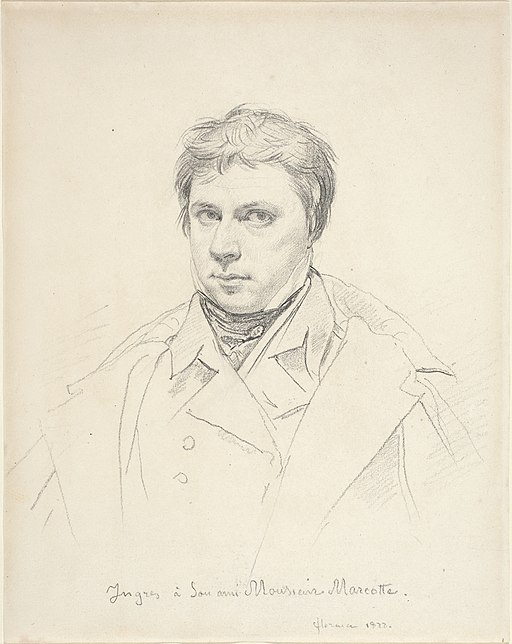 Jean-Auguste-Dominique Ingres (1780 – 1867) was a French Neoclassical painter who thought of himself as a painter of history and who today is highly regarded for his many portraits.

Critics often found his style bizarre and archaic. His expressive distortions of form and space make him an important precursor of modern art. His work influenced Picasso and Matisse and other modernists.

“The Valpinçon Bather” by Jean-Auguste-Dominique Ingres is a female nude in a chaste pose. The curves accentuate her neck and the curves of her back and legs in the green draperies.

With the white linen in front of her and the folds of the bedsheets, this painting lacks the overt sexuality of other Ingres paintings.

Ingres has masterfully depicted a calm and measured sensuality, which is a masterpiece of harmony and light. Ingres returned to the form of this figure several times in his life. Museum: The Louvre

Ingres has successfully evoked the form of both the Near East and earlier western styles associated with the mythological subject matter.

Painted originally in a rectangular format, Ingres altered the painting by cutting the picture to its present tondo form. Fortunately, photographs of the art in its original size have survived. Museum: The Louvre

“Grande Odalisque” by Jean-Auguste-Dominique Ingres depicts an odalisque. An odalisque was a chambermaid or attendant in the sequestered living quarters used by wives, court ladies, and concubines in an Ottoman household of the Ottoman sultan.

Grande Odalisque attracted extensive criticism when it was first exhibited. It became renowned for the elongated proportions and departure from the restrictions of anatomical realism.

This work signified Ingres’ break from Neoclassicism and shifted towards exotic Romanticism. Ingres favored long lines to convey curvature and sensuality and the very skillful use of light and shadow to sculpture proportions. Museum: The Louvre

“Madame Moitessier” by Jean-Auguste-Dominique Ingres is a portrait of Marie-Clotilde-Inès Moitessier (née de Foucauld) begun in 1844 but not completed until twelve years later.

Madame Moitessier (1821–1897) was the daughter of a French civil servant who married a wealthy banker and merchant, who was a widower twice her age.

In this painting, she is shown wearing abundant jewelry and dressed in an elegant silk dress with a floral pattern, which is echoed by the flowers and leaves of the gilt-framed mirrors.

Madame Moitessier is framed on either side by mirrors, and her profile reflection can be seen in the mirror on the right. Museum:   The National Gallery, London

“Madame Moitessier” by Jean-Auguste-Dominique Ingres is a portrait of Marie-Clotilde-Inès Moitessier (née de Foucauld) completed in 1851 which depicts the subject standing in a black dress looking directly at the viewer.

Madame Moitessier (1821–1897) was the daughter of a French civil servant who married a wealthy banker and merchant, who was a widower twice her age. Museum: National Gallery of Art, Washington, D.C.

Ruggiero is portrayed as the knight riding a hippogriff, which is a legendary creature half horse and half eagle.

According to the poem, the hero is riding near Brittany’s coast, where he finds a beautiful woman who is chained to rock on the Isle of Tears.

She has been abducted and stripped naked by barbarians. She was left there as a human sacrifice to a sea monster. Museum: The Louvre

Oedipus and the Sphinx (Louvre Museum)

“Oedipus and the Sphinx” by Jean-Auguste-Dominique Ingres depicts Oedipus explaining the riddle of the Sphinx.

Oedipus was a tragic hero in Greek mythology. Oedipus accidentally fulfilled a prophecy in which he kills his father and unknowingly marries his mother.

As part of his journey, which brings disaster to his city and family, Oedipus encountered a Sphinx. The Sphinx would stop all travelers and ask them a riddle.

If the travelers did not answer the riddle correctly, they would be killed and eaten. If the answers were correct, they would be free to continue on their journey.

“Oedipus and the Sphinx” by Jean-Auguste-Dominique depicts the Sphinx as it grimaces in horror as Oedipus solves her riddle. A Shinx is a mythical creature, part lion, part woman.

Ingres frequently repeated the subjects of his paintings, first depicted this story at the beginning of his career, and returned to it several times, making variations in the composition, such as reversing the direction in which the figures faced.

In 1864 Ingres painted this third version of Oedipus and the Sphinx, smaller than the first version, which reverses the composition and varies many details.

A Tour of Famous Artists you should Know

Famous Women in the Arts

“Is there anyone among the great men who have not imitated? Nothing is made with nothing.”

“Make copies, young man, many copies. You can only become a good artist by copying the masters.”

“You have to observe flowers to find the right tones for the folds of clothes.”

Jean-Auguste-Dominique Ingres – The Duke of Orléans

“Is there anyone among the great men who have not imitated? Nothing is made with nothing.”
– Ingres