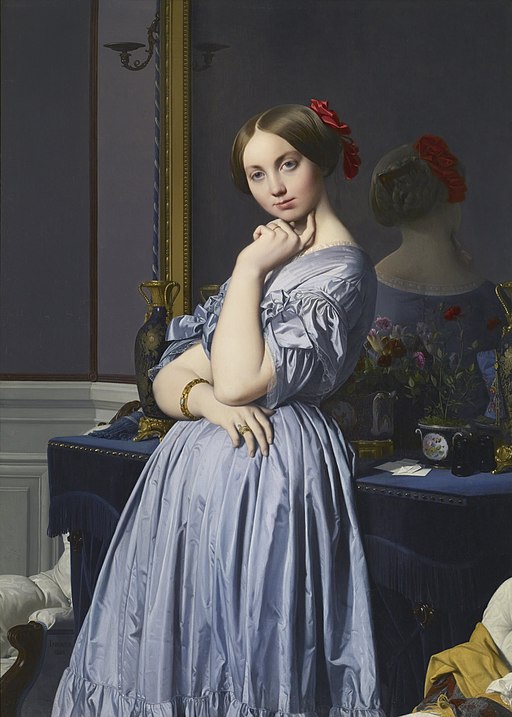 “Portrait of Comtesse d’Haussonville” by Ingres

“Portrait of Comtesse d’Haussonville” by Jean-Auguste-Dominique Ingres depicts a young princess in her twenties from a distinguished French family who became a French essayist and biographer.

She was considered independent, liberal, and outspoken. She published several books, including biographies of Byron and the Irish revolutionary Robert Emmet.

This portrait took three years to complete in 1845 when she was a mother of three. The work resulted after several false starts and a great many preparatory drawings.

A friend of the family commented to Ingres, who at the time was the greatest portrait painter in France and his sixties:

“You must have been in love to depict her this way.”

The portrait is provocatively intimate in this scene, as though the viewer had just entered her boudoir, as she calmly leaned on an upholstered fireplace and considered her audience.

Louise de Broglie, Countess d’Haussonville (1818 – 1882), married the young Vicomte d’Haussonville at eighteen. In her memoirs, Louise said of herself:

“I was destined to beguile, to attract, to seduce, and in the final reckoning to cause suffering in all those who sought their happiness in me.”

Louise was born with a title, as the daughter of statesman and diplomat Victor de Broglie, 3rd Duke de Broglie and Albertine, Baroness Staël von Holstein. 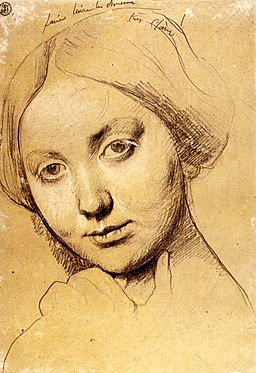 A study of Louise’s face by Ingres, one of over 16 studies

Through her mother, Louise was the granddaughter of famed novelist known as Madame de Staël. From whom she would inherit Château de Coppet in Switzerland.

In 1838, two years into the marriage, Viscount d’Haussonville sought to have his wife’s portrait painted. Ingres, by then, was 60 years old and highly successful, was not initially interested in doing portraits, but accepted this project.

For both the painter and the sitter, the process was not easy. Louise would spend months abroad at a time, and her sittings were interrupted by pregnancy.

At least 16 preparatory sketches were made, an early trial portrait in oil, and dozens of drapery studies. Ingres significantly revised Louise’s costume and refined her facial expression.

Ingres spent the first six months of 1845 working intensely on the portrait and finally finished. Louise became the daughter, sister, spouse, and mother of four members of the French Academy and was highly accomplished in her own right.