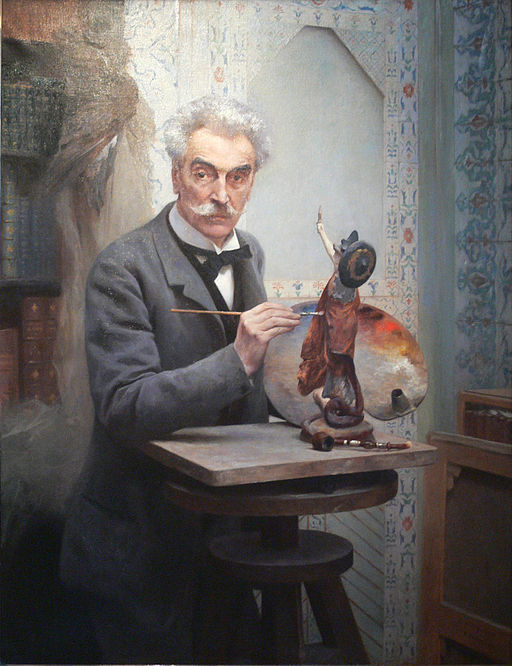 Jean-Léon Gérôme (1824 – 1904) was a French painter and sculptor whose oeuvre included historical paintings, Greek mythology, Orientalism, and portraits in the academic painting tradition.

Jean-Léon Gérôme started his artistic career in Paris about 1840, where he studied under Paul Delaroche, a painter of historical scenes, whom he accompanied to Italy.

He visited Florence, Rome, the Vatican, and Pompeii.  He then attended the École des Beaux-Arts back in Paris.

In 1856, he visited Egypt for the first time. Gérôme followed the classic grand tour of most occidental visitors to the Orient.

This experience would herald the start of many orientalist paintings depicting Arab religion, genre scenes, and North African landscapes.

In his autobiographical essay, Gérôme described how important oil sketches made on the spot were for him:

“even when worn out after long marched under the bright sun, as soon as our camping spot was reached, I got down to work with concentration.
But Oh! How many things were left behind, of which I carried only the memory away!
And I prefer three touches of color on a piece of canvas to the most vivid memory,
but one had to continue on the journey with some regret.”

In his last years, when he started to protest and showed public hostility to the “decadent fashion” of Impressionism, his influence began to wane, and he became unfashionable.

But after the exhibition of Manet in the Ecole in 1884, he admitted that “it was not so bad as I thought.”

Jean-Léon Gérôme died in 1904 and was found in front of a portrait of Rembrandt. He was also close to his painting “Truth Coming Out of Her Well.”

His Requiem Mass was attended by most of the prominent politicians, and many painters and writers. He was buried in front of the statue “Sorrow.” He had cast this statue for his son Jean who had died in 1891.

“Pygmalion and Galatea” by Jean-Léon Gérôme depicts the story from Ovid’s Metamorphoses, where the sculptor Pygmalion kisses his ivory statue Galatea, after the goddess,

Aphrodite has brought her to life. In Ovid’s narrative, Pygmalion was a Cypriot sculptor who carved a woman out of ivory. Galatea “she who is milk-white” is the name of the statue carved by Pygmalion.

His figure was so beautiful and realistic that he fell in love with it. On Aphrodite’s festival day, Pygmalion made offerings at the altar of Aphrodite, and he made a wish.

When he returned home, he kissed his ivory statue and found that its lips felt warm. Aphrodite had granted Pygmalion’s request; the ivory sculpture changed to a woman with Aphrodite’s (or Venus’ the Roman equivalent) blessing. Museum: Metropolitan Museum of Art – MET

The Cock Fight by Jean-Léon Gérôme, also known as “Young Greeks Attending a Cock Fight,” portrays two near-naked adolescents at the foot of a fountain watching the fight between the two roosters.

Their youth contrasts with the weathered profile of the Sphinx and the fountain overall. This painting also represents the artist’s first great successes at the age of twenty-three.

This painting has no mythological meaning. It is in the Néo-Greek (Neo-Grec) tradition, which was a Neoclassical revival style of the mid-to-late 19th century that was popularised in architecture, the decorative arts, and in painting.

The Néo-Grec painters were charged with selectively adopting the ancient Greek style, in that they left out noble themes and only focused on trivial daily life.

This led to accusations that they were creating art that supported the ideologies of the comfortable middle class. Museum: Musée d’Orsay, Paris

The Duel After the Masquerade

“The Duel After the Masquerade” by Jean-Léon Gérôme depicts a man dressed as a Pierrot. He has been mortally wounded in a sword duel and has collapsed into the arms of a friend.

A surgeon, dressed as a Doge of Venice, tries to stop the flow of blood, while the third person dressed as a priest clutches his head.

The scene is set on a grey winter morning in forest, trees bare and snow covering the ground.

The survivor of the duel is dressed as an American Indian; he is shown walking away with his shoulders and head hunched down, he is supported by his second, who is dressed as Harlequin.

The wounded man is still holding his sword, in contrast to the victor who has dropped his sword, suggesting that the wounded duelist started the contest of honor.

The bizarreness of the scene with all the characters dressed for a Masquerade. The brightly colored costumes had turned into a tragedy. Museum: Walters Art Museum

Phryne before the Areopagus

“Phryne before the Areopagus” by Jean-Léon Gérôme depicts Phryne, a legendary courtesan in ancient Greece who was put on trial for impiety.

The speech from the prosecutor seemed to be successfully influencing the verdict to an unfavorable outcome for Phryne.

So as a last resort, her defender, the famous orator Hypereides, removed Phryne’s robes to bare her breasts and beauty before the judges to arouse their pity and turn the tide of opinion.

Phryne’s beauty caused the judges to adopt a superstitious fear that they could not bring themselves to condemn “a prophetess and priestess of Aphrodite” to death.

They decided to acquit her out of pity and fear of retribution from the gods that gave Phryne her beauty. The trial of Phryne has inspired many works of art. Museum: Kunsthalle Hamburg

As a historical painting of the era, Pollice Verso was popular with viewers affording them a sense of moral superiority over previous cultures. This painting has been an inspiration for statues, pictures, films, and images of Gladiators. Museum:  Phoenix Art Museum

“L’Eminence Grise” by Jean-Léon Gérôme depicts the palace of Cardinal Richelieu, the “Red Cardinal,” virtual ruler of France during the childhood of Louis XIII.

Descending the staircase is Richelieu’s chief adviser, François Le Clerc du Trembly, a friar known as L’Eminence grise (the Gray Cardinal), a term that has come to mean “the power behind the throne.”

All of the officials, political, military, and religious, going up the grand staircase bow to the friar in deference to his influence as an advisor to the “Red Cardinal.”

Éminence Grise is french for “grey eminence” and refers to a powerful decision-maker or adviser who operates “behind the scenes” in an unofficial capacity. Museum:  Museum of Fine Arts, Boston

Bonaparte Before the Sphinx

“Bonaparte Before the Sphinx” by Jean-Léon Gérôme depicts Napoleon Bonaparte during his Egyptian campaign, positioned on horseback in front of the Great Sphinx of Giza, with his army in the background.

The painting popularized Napoleon in front of the Sphinx as a subject in art and caricature.

Napoleon’s strategy was to defend French trade interests and to seek alliances to weaken Britain’s access to India. He also sought glory by walking in the footsteps of Alexander the Great. Museum: Hearst Castle

“Bonaparte in Cairo” by Jean-Léon Gérôme depicts Bonaparte gazing down upon the conquered city of Cairo.

This painting is a pendant to “Bonaparte Before the Sphinx” and was painted about the same time. The companion paintings are the same size.

Egypt remained semi-autonomous under the Mamluks until it was invaded by the French forces of Napoleon Bonaparte in 1798. Napoleon defeated the Mamluk troops in the Battle of the Pyramids.

The French defeated the Mamluk cavalry with a giant infantry square, with cannons and supplies safely on the inside. In all 300 French and approximately 6,000 Egyptians were killed. The battle gave rise to dozens of paintings of Napoleon in Egypt. Museum: Hearst Castle

“Napoleon in Egypt” by Jean-Léon Gérôme depicts General Napoleon Bonaparte before the Mamluk Tombs outside Cairo. The road in the background is lined with Mamluk mausoleums from the fourteenth and fifteenth centuries

Mamluk is an Arabic designation for slaves. The term referred to Non-Muslim slave soldiers and Muslim rulers of slave origin. Born slaves, these rulers owed their rise to military prowess and would have been a subject for reflection by Napoleon.

Napoleon during his campaign in Egypt

“Napoleon, during his campaign in Egypt” by Jean-Léon Gérôme depicts Napoleon Bonaparte as a general of the French Revolution on a camel during his Egyptian expedition.

Napoleon arrived in Egypt with his generals in 1798 and attempted to add this territory to France’s growing empire. The British defeated the French navy at the “Battle of the Nile,” one of the greatest naval disasters of all time.

The loss of the French Navy put an end to Napoleon’s dreams of expansion to Africa. The campaign ended in defeat for Napoleon, and the withdrawal of French troops from the region. Museum: Hermitage Museum

“I prefer three touches of color on a piece of canvas to the most vivid memory.”
– Jean-Léon Gérôme