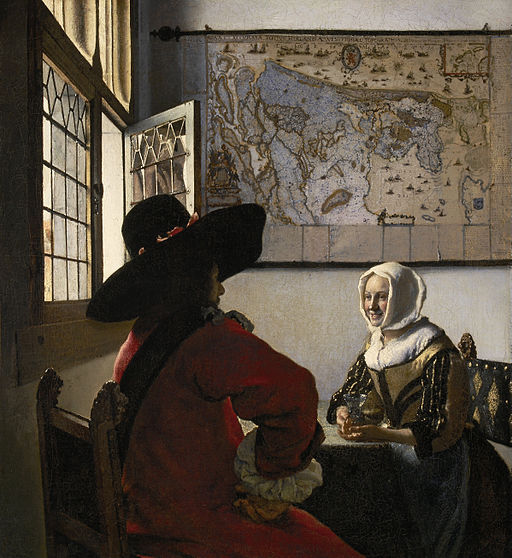 “Officer and Laughing Girl” by Johannes Vermeer depicts a girl in a yellow dress seated at a table facing a man with a large hat. She has a soft light falling on her face, coming from the left-hand side of the painting from an open window.

The man in the painting has his back to the viewer and is mainly in the shadows with his face obscured. He is a cavalier wearing a red coat and an expensive hat, showing his wealth and rank. His hat is wide-brimmed, which was weather-resistant and used for snowy and rainy conditions.

The background includes a large map on the wall. The window and lighting are characteristic of Vermeer’s interior paintings because he used the same room in many of his paintings.

This window is extremely similar to the window in the Girl Reading a Letter and Open Window and the Milkmaid. The glass in the window has variations of color, showing Vermeer’s precision in this painting’s details.

The woman resembles Vermeer’s wife, Catharina Bolnes, who had posed for many of his paintings. With x-ray photographs, art historians can see that Vermeer had initially planned to paint the woman with a large white collar.

This was later changed to show more of her yellow dress. The yellow bodice with braiding has appeared in many of Vermeer’s other portraits. The woman is showing holding a wine glass, usually used for white wine to illustrate her wealth.

The women’s headcover, which was usually worn as an everyday, common dress, was later extended to cover all of her hair and focus attention on her face and expression. 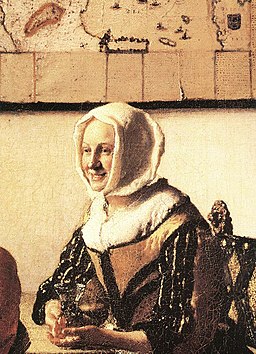 The woman is also wearing a blue apron over her dress, but it is hidden in the shadows of the table. Her dress has been interpreted to mean that the soldier surprised the girl with an impromptu visit during her work.

The meaning of the relationship between the woman and the soldier is unknown. Some art historians believe that it portrays a woman being courted by this soldier. Others suggest that her open hand and smile could be asking for payment of services.

The red coloring in the soldier’s uniform is associated with power and passion, lending an emotional mood to the painting. His rank as an officer is identified by the black sash he wears.

His striking shadowy presence adds drama and mystery to the mood of the composition. Placing the male figure in the foreground is also an artistic device to increase the depth of the overall painting; it is called repoussoir.

In two-dimensional paintings, repoussoir is an object along the right or left foreground that directs the viewer’s eye into the painting by framing the composition’s edge.

This artistic technique became popular with Mannerist and Baroque artists and is found frequently in Dutch seventeenth-century paintings.

Caravaggio often used this technique, and Vermeer may have learned it from a Caravaggist’s painting or some other influential painter.

Johannes Vermeer is the favorite painter of many map historians. Several of his painting illustrate maps hanging on walls or globes standing on tables or cabinets.

Vermeer painted these cartographical objects with such detail that it is often possible to identify the actual maps he used as a model in his art.

Vermeer depicted as wall decorations in three of his paintings, a map of Holland and West Friesland that no longer survives. However, the map’s existence is documented in archival sources and a second edition published by Willem Blaeu in 1621.

Vermeer details this map as a wall decoration in this painting. Bright sunlight bathes the large map on the wall showing Vermeer’s realism. The wall map is easily identifiable as Blaeu’s 1621 map of Holland and West Friesland with its characteristic design, decoration, and geographic content.