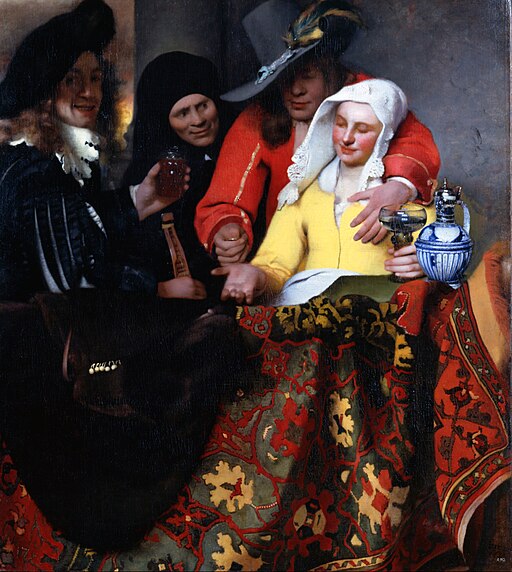 “The Procuress” by Johannes Vermeer

The man to the side wearing a black beret and a doublet with slashed sleeves is probably a self-portrait of Vermeer. In the painting, Vermeer’s character is as a musician, in the employ of the madam, he carries a cittern as his musical instrument.

It is one of only three paintings Vermeer signed and dated. In 1696 the painting was auctioned in Amsterdam, with the title of “A merry company in a room.”

This painting was influenced by earlier work on the same subject called “The Procuress” by Dirck van Baburen, owned by Vermeer’s mother-in-law.

The painting is atypical of Vermeer’s style and expression and lacks the typical light. It showed a 24-year-old Vermeer seeking his style. The depiction of the jug and rug demonstrates his emerging skills.

A detailed oriental Kilim rug thrown over a banister is a tapestry-woven carpet traditionally produced in the Turkic countries, which became popular in the wealthy Western European countries.

Rembrandt vs Vermeer: The Titans of Dutch Painting

Tour of the Gemäldegalerie Alte Meister

“What’s the use of candle and glasses if the owl doesn’t want to see.”
– Dutch Proverb