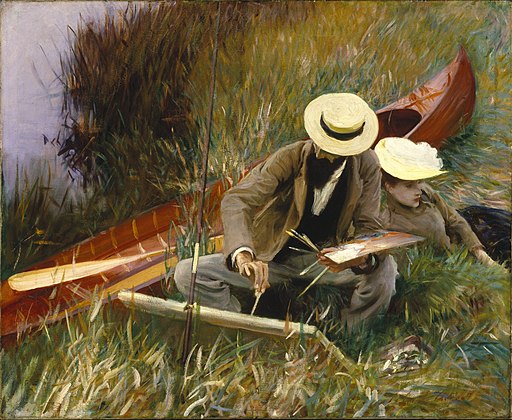 “An Out-of-Doors Study” by John Singer Sargent depicts the French artist Paul Helleu, and his young wife, Alice, at Fladbury, in England’s Cotswolds.

During the late 1880s, Sargent was experimenting with portrait compositions whose informality was in sharp contrast to his commissioned studio portraits of elegant society figures.

This composition is constructed around the diagonal of the red canoe and the easel. Sargent captures the pose of the artist’s hand and his concentration as he applies paint to his canvas. His wife, Alice, appears uninterested as she gazes away into the distance.

The Impressionist works of Claude Monet inspired John Singer Sargent to experiment. In this study, he freed himself to create an asymmetric composition, using natural light and his subjects’ casual poses.

Helleu and his wife were among the visitors to Fladbury Rectory in Worcestershire, where Sargent stayed during the summer of 1889. This study of Helleu, an artist working outdoors, is a painting about the act of painting.

Sargent’s title for this painting, “An Out-of-Doors Study,” has a double meaning. It refers to the painting we see being painted by the French painter Paul Helleu. But the title also applies to his own study with an Impressionist method of working “en Plein air” (painting outdoors).

Paul César Helleu (1859 – 1927) was a French painter best known for his numerous portraits of beautiful women of the Belle Époque. He also conceived the ceiling mural of night sky constellations for Grand Central Terminal in New York City.

In 1876, at age 16, he was admitted to the École des Beaux-Arts, beginning academic training in art with Jean-Léon Gérôme.

Helleu was commissioned in 1884 to paint a portrait of a young woman named Alice Guérin (1870–1933). They fell in love and married two years later.

Throughout their lives together, she was his favorite model. Charming, refined, and graceful, she helped introduce them to Paris’ aristocratic circles, where they became a popular couple.

John Singer Sargent (1856 – 1925) is considered one of the leading portrait painters and is known for his evocations of his era’s luxury.

He created over 900 oil paintings and more than 2,000 watercolors, and many sketches and drawings. He also traveled extensively across Europe, the Middle East, and the United States.

His commissioned works were consistent with portraiture’s grand manner, while his informal studies and landscape paintings displayed a familiarity with Impressionism.

In later life, Sargent expressed ambivalence about formal portrait work restrictions and devoted much of his energy to mural painting and working en Plein air.