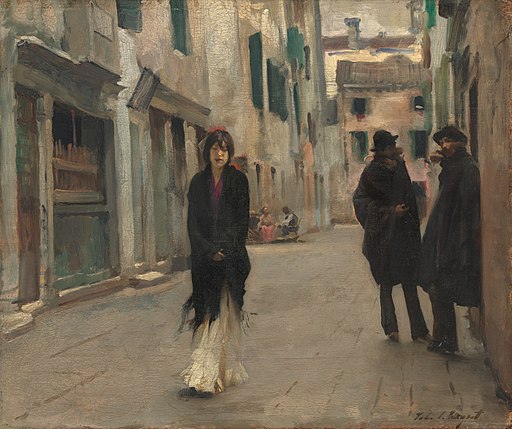 “Street in Venice” by John Singer Sargent is an oil on wood painting that depicts a young woman walking along the flagstones, kicking her skirt with her feet. She is being observed by two darkly colored men in the shadows to her right.

Her down-turned eyes, her crossed hands, and steady pace as she passes the two men, show the woman’s concern with the male glare as she deliberately avoids their attention. Her shawl and skirt are shown flowing in motion, suggesting that she is moving quickly past them.

Sargent painted this work in a post-impressionist manner. It is set in a backstreet off the Calle Larga dei Proverbi, near the Grand Canal in Venice.

The influence of Impressionism is evident in the broad brushstrokes of her dress and the cropping of the composition. In this work, Sargent has mostly ignored the architectural aspects of the street. He has focused instead on the composition of the figures, and the story portrayed.

John Singer Sargent painted and drew many Venetian scenes during his many visits to this city. This painting is the second painting that Sargent had created with this name, and the earlier one is dated to 1880-1881.

At this time in his life, John Singer Sargent was in his mid-20s. He was traveling through Europe to study the masters and gain inspiration for his work. This painting shows the influence of Diego Velázquez and the Italian photographer Carlo Naya. 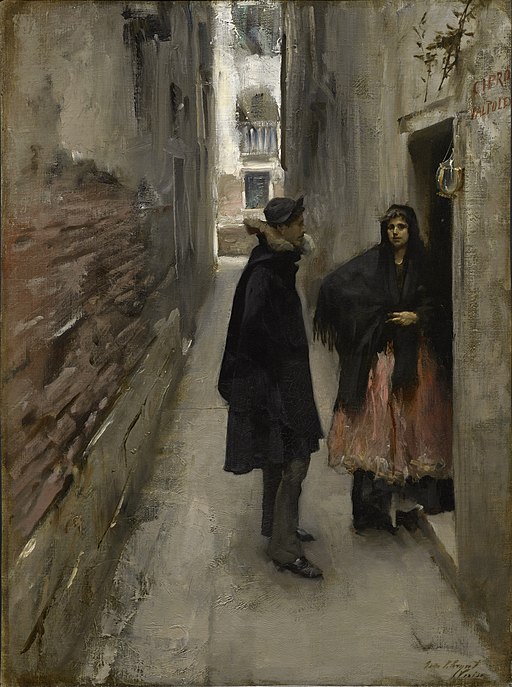 “A Street in Venice” by John Singer Sargent is another of Sargent’s Venetian scenes depicting a backstreet in the shadows while light flashes on the buildings in the background. The painting is composed as a series of descending rectangles arranged in a near-telescopic manner.

The narrow alleyway, with its peeling plaster walls and the burst of light at the far end, draws us into the picture. This painting is closely cropped and is almost a photographic freeze-frame capturing a moment in time.

Two figures are silhouetted against a lighter background, captured in discussion showing the growing influence of photography on painted compositions.

The woman has stepped over the threshold of the door. She is looking out at the viewer as if we have intruded on her private meeting.

These two paintings are part of nearly twenty paintings in which Sargent, offers a glimpse into everyday life, instead of the iconic views of Venice.

Each destination offered visual stimulation. Even at his leisure, while escaping his portrait studio, Sargent painted restlessly, often painting from morning until night.

Sargent hundreds of watercolors of Venice are especially notable, as many were done from the perspective of a gondola. His colors were sometimes extremely vivid, and the scenes dreamlike.

While in Venice, John Singer Sargent also studied the old masters. In 1874, he wrote:

“I have learned in Venice to admire Tintoretto immensely and to consider him perhaps second only to Michelangelo and Titian.”