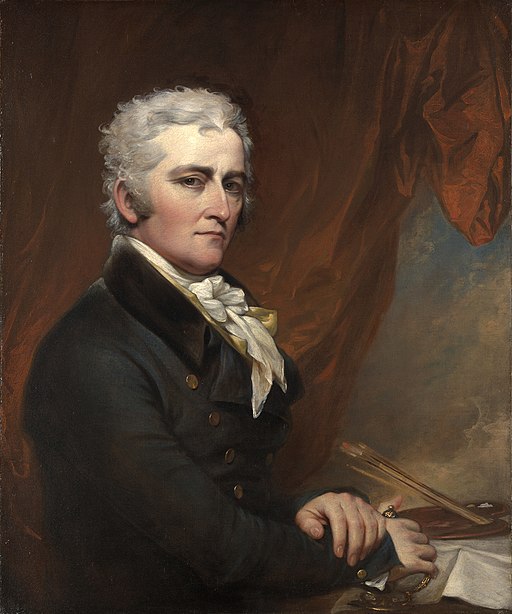 Trumbull also incorporated the actual likeness of his subjects into his depiction of historical paintings.

A Virtual Tour of John Trumbull

“Alexander Hamilton” by John Trumbull is a 1792 full-length portrait, and it is one of the many paintings Trumbull made of Hamilton.

This work is considered one of the best pictures of Hamilton from the Federalist Era. This portrait was painted while Alexander Hamilton was the first Treasury Secretary for the USA.

Hamilton was the driving force behind the economic policies of the new nation of the United States that fostered a stable central government.

“John Adams” by John Trumbull depicts the American statesman and Founding Father, who served as the second President of the United States (1797–1801) and served two terms as the first Vice President (1789–97).

The Capture of the Hessians at Trenton, December 26, 1776

The Battle of Trenton was a pivotal battle during the American Revolutionary War. It followed Washington’s crossing of the Delaware River north of Trenton the previous night.

“The Death of General Warren at the Battle of Bunker’s Hill, June 17, 1775” by John Trumbull is the title of several oil paintings completed by the artist depicting the death of a hero during the American Revolutionary War.

John Small, the British major, is shown preventing a fellow British soldier from bayoneting Warren. Trumbull wanted to express the poignancy in the conflict of men who had earlier served together.

Mercer commanded the leading division of the Continental Army when attacked by the British near Princeton, New Jersey. Mercer’s horse was killed, and two grenadiers attacked him. The British were in control of the battle at this moment.

“Surrender of Lord Cornwallis” by John Trumbull depicts British Lieutenant-General Cornwallis’s surrender at Yorktown, Virginia in 1781. The painting commemorates the end of the Siege of Yorktown and the Revolutionary War’s last major campaign, which led to American independence.

The sky is filled with the dark clouds of smoke, and the broken cannon in the background point to the battle that led to the surrender.

The American Revolutionary War was initiated by the thirteen original colonies in Congress against the Kingdom of Great Britain.

After six years of battles, Cornwallis’s British force of 7,000 men had retreated to an entrenched position in Yorktown, where they planned for a rescue from the sea, but a French fleet repelled the British vessels.

General Washington then deployed a much larger army, and his artillery bombarded the British positions. After American and French troops overran two British strongholds, Cornwallis surrendered.

In the center of the scene, American General Benjamin Lincoln is mounted on a white horse. He extends his right hand toward the sword carried by the surrendering British officer, General Charles O’Hara.

The Death of General Montgomery in the Attack on Quebec, December 31, 1775

Trumbull was born in Connecticut in 1756. His father served as Governor of Connecticut, and both sides of his family were descended from early Puritan settlers.

He had two older brothers, Joseph Trumbull, the first commissary general of the Continental Army in the Revolutionary War, and Jonathan Trumbull Jr., who would become the second Speaker of the House of the United States.

Due to a childhood accident, Trumbull lost the use of one eye. This may have influenced his detailed painting style.

John Trumbull in the Hamilton Musical

“No John Trumbull” is the 2nd song of Act Two in the Off-Broadway production of Hamilton.

The 2014 Workshop recording of Hamilton, “No John Trumbull,” sets up the next track’s cabinet meeting, “Cabinet Battle #1”.  (Hear Lyrics below)

The title and first verse refer to the artist John Trumbull, famous for his Revolutionary War paintings, including George Washington, John Adams, and several of Alexander Hamilton.

The painting referenced in this song, “Declaration of Independence,” is featured on the US two-dollar bill.

“No man ever felt the halter draw, With good opinion of the law.”

“What has poster ‘ty done for us, That we, lest they their rights should lose, Should trust our necks to gripe of noose?”

“But as some muskets so contrive it As oft to miss the mark, they drive at, And though well aimed at duck or plover Bear wide, and kick their owners over.”

“When Yankees, skilled in martial rule,
First, put the British troops to school;
Instructed them in warlike trade.”
– John Trumbull