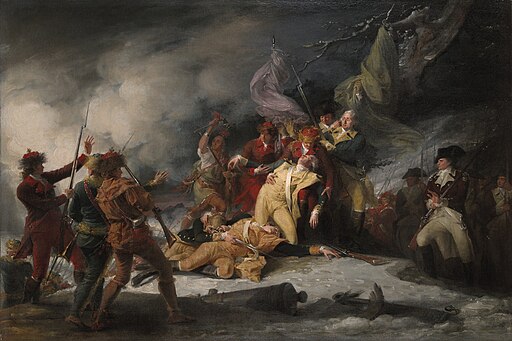 “The Death of General Montgomery in the Attack on Quebec”

Trumbull described the scene he envisioned:

“Grief and surprise mark the countenances of the various characters.
The earth covered with snow,–trees stripped of their foliage,
–the desolation of winter, and the gloom of night,
heighten the melancholy character of the scene.”

Montgomery made the end-of-year attack in a blinding snowstorm to conceal his army’s movements. The plan was to converge in the lower city before scaling the walls protecting the upper city. Montgomery’s main force turned back after he was killed by cannon fire early in the battle.

This painting was the second in Trumbull’s series of national historical paintings on the war, the first being The Death of General Warren at the Battle of Bunker’s Hill, June 17, 1775.

A larger version at the Wadsworth Atheneum

Also, two separate engraved versions and a print have been produced by three separate artists.

The Battle of Quebec was fought on December 31, 1775, between American Continental Army forces and the British defenders of Quebec City early in the American Revolutionary War.

The battle was the first major defeat of the Americans, and it came with heavy losses. General Richard Montgomery was killed, and more than 400 men were taken prisoner.

Benedict Arnold (1741 –  1801) was an American military officer who fought with distinction for the American Continental Army, rising to major general before defecting to the British side of the conflict in 1780.

General Washington had placed him in command of West Point, New York. Arnold planned to surrender the fort to British forces, but the plot was discovered, and he fled to the British lines.

Arnold received a commission as a brigadier general in the British Army. Arnold’s name quickly became a byword for treason and betrayal. 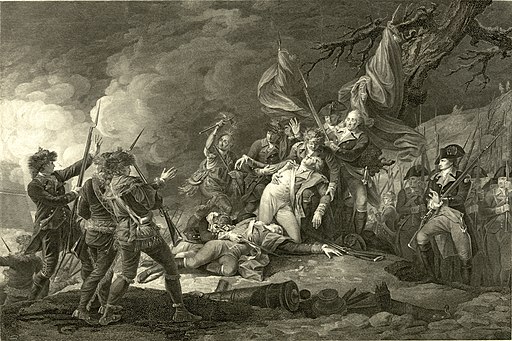 Engraving by Christian Wilhelm Ketterlinus of The Death of General Montgomery in the Attack on Quebec, December 31, 1775, by John Trumbull.

Matthias Ogden (1754 – 1791) was an American who fought in the American Revolutionary War and served in various political positions afterward.

After the hostilities outbreak between the American colonists and the British authorities in 1775, Ogden joined as a gentleman-volunteer on Benedict Arnold’s march to Quebec, joined by his cousin Aaron Burr.

Due to his own injuries, Ogden was not actually present at Montgomery’s death.

After the war, Ogden was a founding member of the Society of the Cincinnati in the State of New Jersey and a member of the state’s legislative council.

Joseph Louis Cook or Akiatonharónkwen, a Mohawk name (died 1814), was an Iroquois leader and commissioned officer in the Continental Army during the American Revolution.

Born to an African father and an Abenaki mother in what is now Schuylerville, New York, he and his mother were taken captive in a French-Mohawk raid and taken to a Mohawk village south of Montreal.

A Mohawk family adopted them. He became an influential leader among the Mohawk and distinguished himself as a warrior for their allies, the French, during the French and Indian War.

During the American Revolutionary War, Cook supported the American colonists and joined their fight against the British. He became the highest-ranking Native American officer in the Continental Army, achieving the rank of lieutenant colonel.

He led Oneida warriors, who were allied with the rebels, against the British in some actions. After the war, he became an important adviser to the Oneida and represented them and the Seven Nations of Canada.

The Death of General Montgomery in the Attack on Quebec, December 31, 1775

Later version at the Wadsworth Atheneum

The US Invasion of Canada