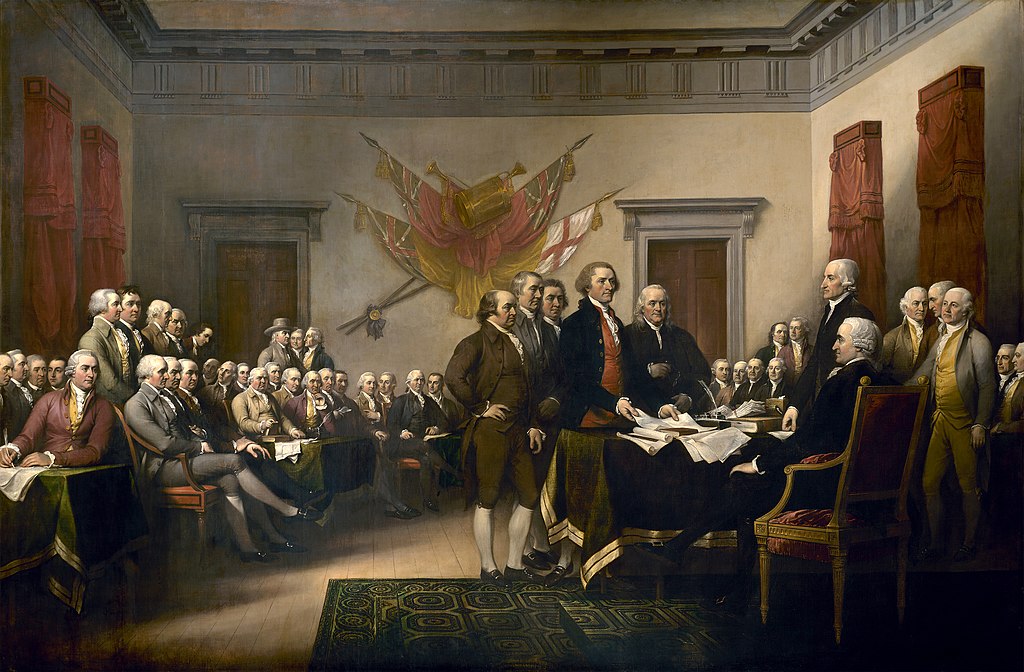 “Declaration of Independence” by John Trumbull

The event depicted took place on June 28, 1776, and the signing of the document, which took place later on the 4th of July.

Trumbull painted many of the figures in the picture from life and visited Independence Hall to depict the chamber where the Second Continental Congress met.

The painting shows the real likeness of 42 of the 56 signers of the Declaration. Trumbull was unable to obtain the authentic portraits for all of the men.

The Declaration was debated and signed over a period when membership in Congress changed. The men portrayed in the painting were never in the same room at the same time.

In the background, there are three Union Jacks and a single English flag hanging on the wall. This feature is not depicted in all versions of this painting, most notably the one on the two-dollar bill.

This version was based on a smaller version of the same scene, presently held by the Yale University Art Gallery.

The Declaration of Independence, July 4, 1776 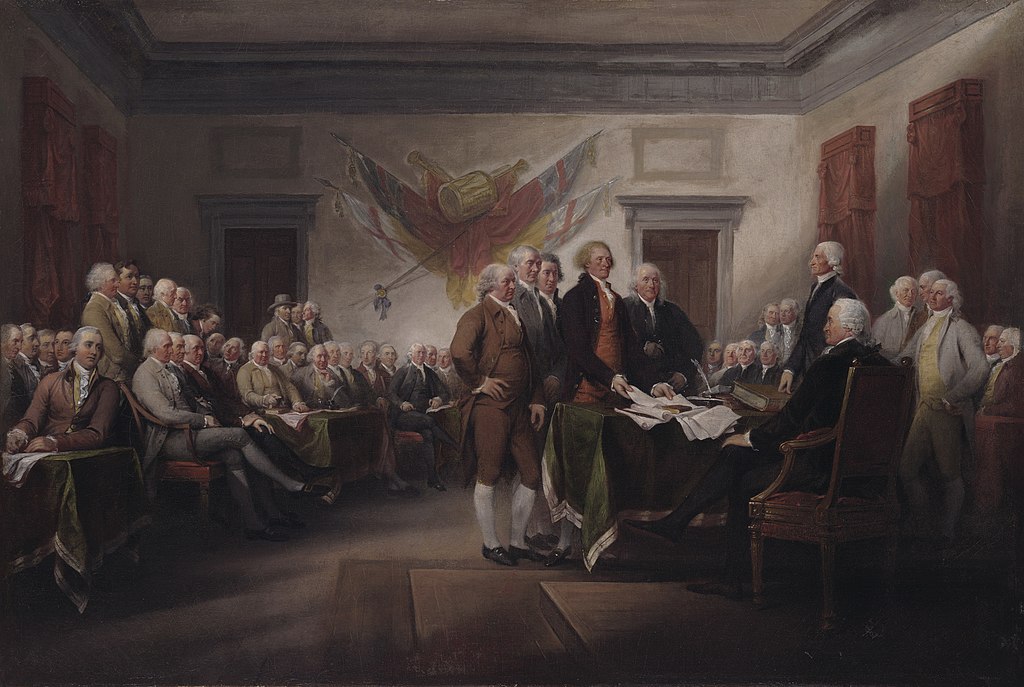 “The Declaration of Independence, July 4, 1776” by John Trumbull – Yale Version

Trumbull painted a smaller version entitled “The Declaration of Independence, July 4, 1776,” which is the Yale University Art Gallery in New Haven.

Trumbull represents the moment when the committee appointed to draw up “The Declaration of Independence” submitted Jefferson’s draft for the consideration of the Continental Congress.

Trumbull included the whole committee, John Adams, Roger Sherman, Robert Livingston, Thomas Jefferson, and Benjamin Franklin. The document is shown ceremoniously being delivered to John Hancock. In reality, Jefferson alone made the delivery of the document.

John Trumbull consulted widely about who should be depicted in the scene. Adams and Jefferson urged that all the delegates be included, even those who were not present or those who had opposed the Declaration and did not sign.

Trumbull worked on this painting for more than three decades, to ensure he includes all fifty-six figures, but he was unable to obtain all the likenesses.

The United States Declaration of Independence is the pronouncement adopted by the Second Continental Congress meeting at the Pennsylvania State House, now known as Independence Hall, in Philadelphia, on July 4, 1776.

The Declaration explained why the Thirteen Colonies at war with the Kingdom of Great Britain regarded themselves as thirteen independent sovereign states, no longer under British rule.

With the Declaration, these new states took a collective first step toward forming the United States of America.

“We hold these truths to be self-evident, that all men are created equal,
that they are endowed by their Creator with certain unalienable Rights,
that among these are Life, Liberty, and the pursuit of Happiness.
That to secure these rights, Governments are instituted among Men,
deriving their just powers from the consent of the governed,
That whenever any Form of Government becomes destructive of these ends,
it is the Right of the People to alter or to abolish it,
and to institute new Government…”

“”We hold these truths to be self-evident, that all men are created equal, that they are endowed by their Creator with certain unalienable Rights.”
– United States Declaration of Independence