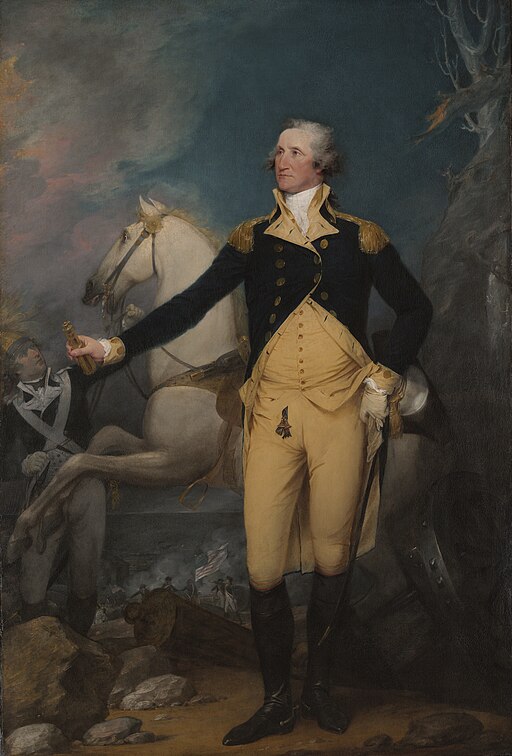 “General George Washington at Trenton” by John Trumbull depicts Wahington in his full military uniform, a blue coat over gold waistcoat and pants. He holds a spyglass in his right hand and a sword in his left gloved hand. Behind him is Blueskin, his light-colored horse, restrained by a groom.

The large full-length portrait was painted in 1792 and shows Washington at Trenton, New Jersey, on the night of January 2, 1777, this was the night after the Battle of the Assunpink Creek.

The background shows the bridge over the Assunpink Creek and nearby mill, along with artillery and campfires. The next day saw Washinton win a decisive victory at the Battle of Princeton.

Battle of the Assunpink Creek

The Battle of the Assunpink Creek, also known as the Second Battle of Trenton, was a battle between American and British troops in and around Trenton, New Jersey, on January 2, 1777.

Washington expected a strong British counterattack, and he decided to meet this attack in Trenton and established a defensive position south of the Assunpink Creek.

Cornwallis advanced on Trenton with about 5,000 men. After assaulting the American positions three times and being repulsed each time, Cornwallis decided to wait and finish the battle the next day.

However, that night, Washington moved his army and attacked the British at Princeton the next day. That defeat prompted the British to withdraw from most of New Jersey for the winter.

The Battle of Princeton was fought near Princeton, New Jersey, on January 3, 1777, and ending in a victory for the Americans.

Following a surprise attack at Trenton on December 26, 1776, General George Washington, crossed the Delaware River back into New Jersey on December 30,

Cornwallis had left 1,400 British troops in Princeton. Washington advanced to Princeton by a back road, where he attacked this smaller British force but had to retreat before Cornwallis arrived with reinforcements.

“General George Washington at Trenton” by John Trumbull was commissioned by Charleston, South Carolina, but it was rejected by the city, resulting in Trumbull painting another version. However, Trumbull considered this portrait.

“the best certainly of those which I painted.”

The portrait is now exhibited at the Yale University Art Gallery in New Haven, Connecticut.

For Charleston, Trumbull painted a similar, but a different version, entitled “Washington at the City of Charleston.” The revised portrait was set at Charleston, with the city in the background, the Cooper River and boats in the middle ground, and local plants in the foreground.

Washington holds a hat in his left hand, resting on his sword while holding a walking stick with his right hand. The painting is now on view in the Charleston City Hall. 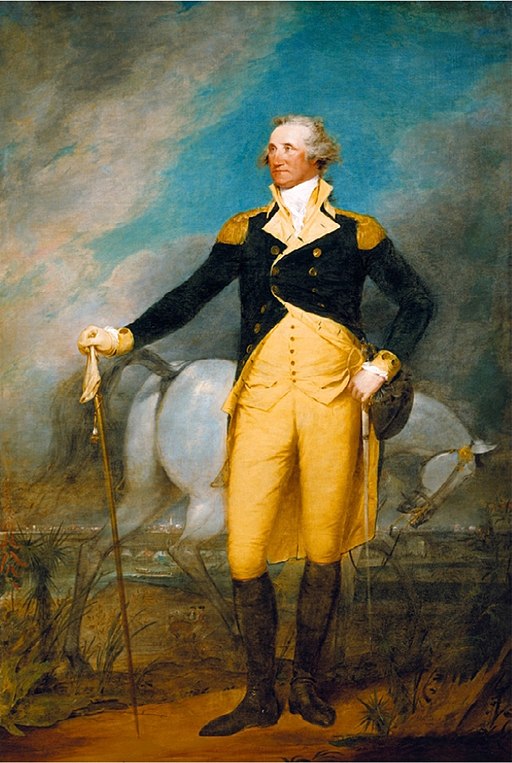 “Washington at the City of Charleston” by John Trumbull, 1792

Trumbull also painted a much smaller version entitled “George Washington before the Battle of Trenton,” c. 1792–94. It is similar to the original, but with changes in the background and the bay horse’s color. It is exhibited at the Metropolitan Museum of Art.

In 1794, Trumbull went to London and made a small version of this portrait and later supervised its engraving. Since then, several other engraving versions had been made.

His painting “Declaration of Independence” was used on the commemorative bicentennial two-dollar bill. Trumbull also incorporated the actual likeness of his subjects into his depiction of historical paintings.

“George Washington before the Battle of Trenton” by John Trumbull

George Washington before the Battle of Trenton

The Battles of Trenton and Princeton

The 10 Days That Changed The World, Washington’s Crossing the Delaware