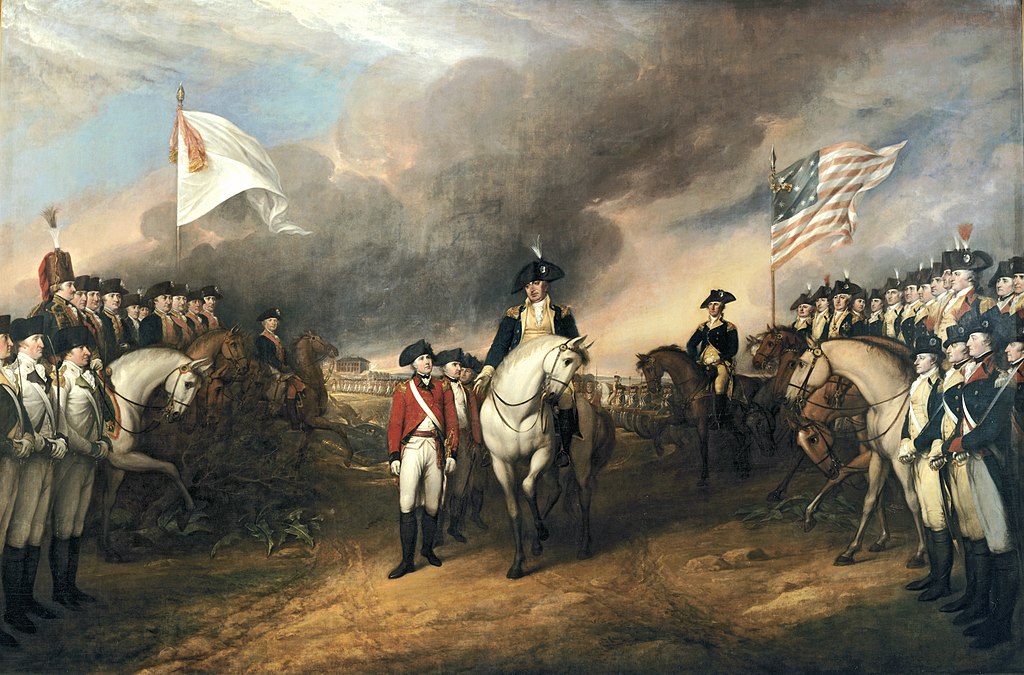 “Surrender of Lord Cornwallis” by John Trumbull depicts British Lieutenant-General Cornwallis’s surrender at Yorktown, Virginia in 1781. The painting commemorates the end of the Siege of Yorktown and the Revolutionary War’s last major campaign, which led to American independence.

The sky is filled with the dark clouds of smoke, and the broken cannon in the background point to the battle that led to the surrender.

The American Revolutionary War was initiated by the thirteen original colonies in Congress against the Kingdom of Great Britain.

After six years of battles, Cornwallis’s British force of 7,000 men had retreated to an entrenched position in Yorktown, where they planned for a rescue from the sea, but a French fleet repelled the British vessels.

General Washington then deployed a much larger army, and his artillery bombarded the British positions. After American and French troops overran two British strongholds, Cornwallis surrendered.

In the center of the scene, American General Benjamin Lincoln is mounted on a white horse. He extends his right hand toward the sword carried by the surrendering British officer, General Charles O’Hara.

To the left, French officers appear standing and mounted beneath the royal Bourbon family’s white banner. The Comte de Rochambeau is on the left-center on a brown horse.

On the right are American officers beneath the Stars and Stripes; among them are the Marquis de Lafayette and Colonel Jonathan Trumbull, the painter’s brother.

General George Washington, riding a brown horse, stayed in the background because Cornwallis, the most senior officer, was not present for the surrender.

Included in the depiction are many leaders of the American troops that took part in the siege.

John Trumbull spent the early part of the American Revolutionary War as a soldier, and he also served as an aide to both George Washington.

In 1789 he sketched several dignitaries whose portraits he intended to use in these paintings. In 1791, he traveled to Yorktown, Virginia, where he sketched the surrender site’s landscape.

The Congress in 1817 voted to commission four large paintings from him, to be hung in the United States Capitol rotunda.

A size of twelve by eighteen feet (370 cm × 550 cm) was agreed, as was the subject matter for the four paintings:

Trumbull spent the next eight years executing the commission, completing this painting in 1820 and he also supervised its hanging in the United States Capitol rotunda, Washington, D. C. in late 1820.

Trumbull himself cleaned and varnished the painting in 1828, and it has been periodically maintained to this day.

“We hold these truths to be self-evident, that all men are created equal, that they are endowed by their Creator with certain unalienable Rights.”
– United States Declaration of Independence