Lamia symbolizes any person or desire that seems to be attractive but is actually destructive. Beauty can be superficial and destructive. The poem concerns the tension between appearance and reality.

In the myth, the Lamia was originally a beautiful woman beloved of Zeus, but Zeus’s jealous wife Hera destroyed all her children by causing Lamia to kill her own offspring.

After the horror and curse, Lamia became disfigured by the torment and transformed into a terrifying being who hunted and killed others’ children.

“Lamia” was used as a bogey word to frighten and discipline children. In later traditions, she became synonymous with a shape-shifting female, seducing youths, and she was ascribed serpentine qualities.

In later classical periods, around the 1st century, A. D., Lamia’s conception shifted to that of a sultry seductress who enticed young men and devoured them.

An ancient Greek account of Apollonius of Tyana’s defeat of a lamia seductress inspired the poem, “Lamia,” by Keats.

“Lamia” is a narrative poem written in 1819. The poem tells how the god Hermes hears of a nymph who is more beautiful than all. Hermes, searching for the nymph, instead comes across Lamia, trapped in a serpent form.

She reveals the previously invisible nymph to him, and in return, he restores her human form. She is then free to seek human relationships.

She soon develops a relationship with a young man; however, it is destroyed when a sage reveals Lamia’s true identity at their wedding feast.

Lamia then disappears, and the youth dies of grief as he is caught between reality and the illusion.

She was a gordian shape of dazzling hue,
Vermilion-spotted, golden, green, and blue;
Striped like a zebra, freckled like a pard,
Eyed like a peacock, and all crimson barr’d;
And full of silver moons, that, as she breathed,
Dissolv’d, or brighter shone, or interwreathed
Their lustres with the gloomier tapestries—
So rainbow-sided, touch’d with miseries,
She seem’d, at once, some penanced lady elf,
Some demon’s mistress, or the demon’s self.
Upon her crest she wore a wannish fire
Sprinkled with stars, like Ariadne’s tiar:
Her head was serpent, but ah, bitter-sweet!
She had a woman’s mouth with all its pearls complete:
And for her eyes: what could such eyes do there
But weep, and weep, that they were born so fair?
As Proserpine still weeps for her Sicilian air.
Her throat was serpent, but the words she spake
Came, as through bubbling honey, for Love’s sake,
And thus; while Hermes on his pinions lay,
Like a stoop’d falcon ere he takes his prey.

John William Waterhouse made several versions of Lamia; the first version was created in 1905. A second version from 1909 shows Lamia next to a pond with a snakeskin shawl on her lap. 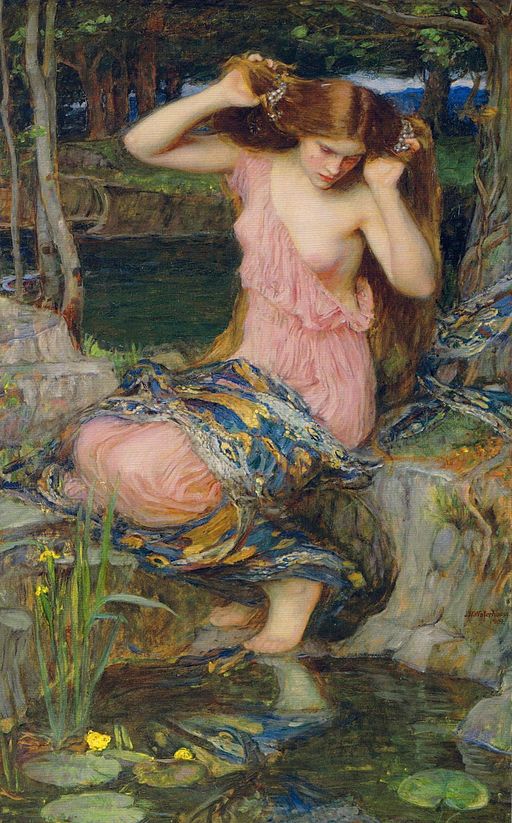 Lamia (second version), with snakeskin on her lap by John William Waterhouse, 1909

In a second version from 1909, John William Waterhouse shows Lamia next to a pond looking at her reflection whilst wearing a delicate pink dress. Her blue embroidered cloth is suggestive of snakeskin.

John William Waterhouse (1849 – 1917) worked in the Pre-Raphaelite style, several decades after the breakup of the Pre-Raphaelite Brotherhood, which included artists such as Dante Gabriel Rossetti, John Everett Millais, and William Holman Hunt.

Waterhouse started his career painting Graeco-Roman subjects in the manner of Alma-Tadema. However, he soon was drawn to the romantic Pre-Raphaelite style, painting the Arthurian and Greek legends popularised by the Romantic poets.

Waterhouse embraced the Pre-Raphaelite style even though it had gone out of fashion in this painting’s British art scene. 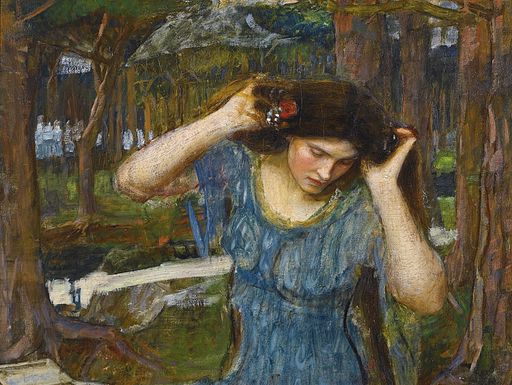 “Vain Lamorna” by  John William Waterhouse – a Study for Lamia

Love and Women in Art