Surrender of a Confederate Soldier

“Surrender of a Confederate Soldier” by Julian Scott depicts a wounded soldier of the Confederate States Army in the American Civil War, waving a flag of surrender.

The soldier is accompanied by a black man, presumed to be the soldier’s slave, and a woman holding an infant assumed to be his wife and child.

The painting does not glorify war, and instead, it shows the suffering and human sacrifice associated with war.

Painted in the Union States of the North, this painting is part of a genre of images that depicted the emotional trauma of the South’s defeat.

The South was uncertain about its future and nervousness about the path to reconciliation between the North and South.

The military uniforms show two soldiers wear the standard blue uniform of the Union Army. At the same time, the two seated figures are state militia volunteers, who wore their own uniforms.

The seated soldier at right represents a Green Mountain Brigade volunteer from Vermont. The card player in the red hat is in the Zouave costume derived from the French army’s famous battalion.

The distinctive uniforms of the Zouave units were of North African origin. It generally included short open-fronted jackets, baggy trousers, sashes, and a fez-like chéchia head-dress. 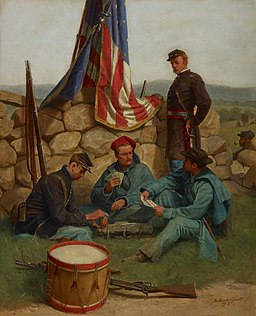 “We don’t even know how strong we are until we are forced to bring that hidden strength forward. In times of tragedy, of war, of necessity, people do amazing things. The human capacity for survival and renewal is awesome.”
– Isabel Allende