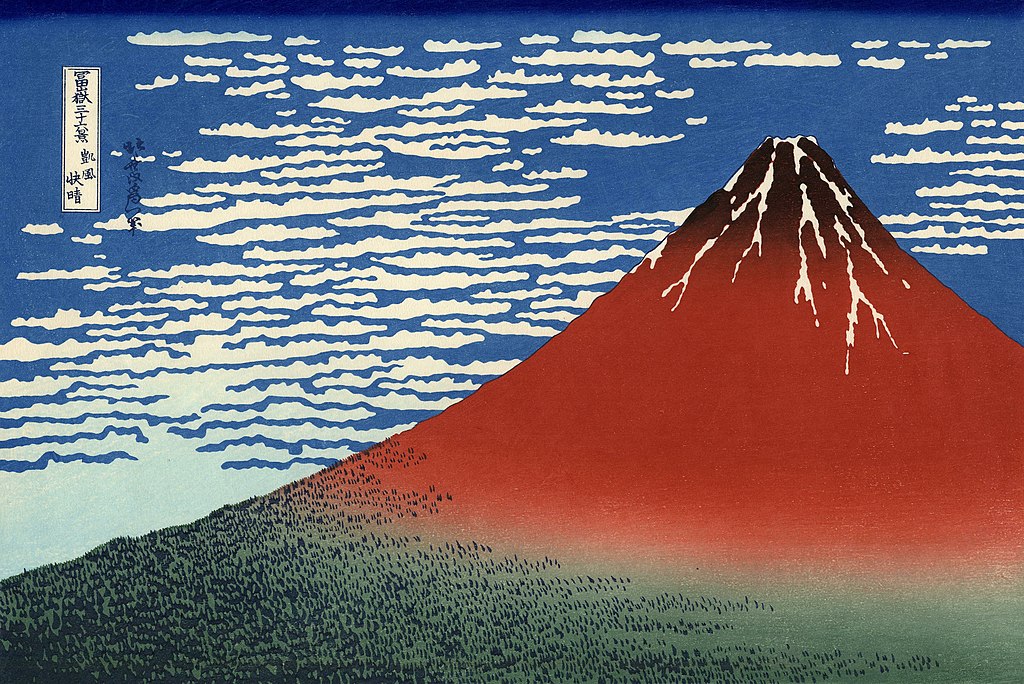 Fine Wind, Clear Morning is a woodblock print by Japanese artist Hokusai and part of his “Thirty-six Views of Mount Fuji” series, dating from 1830 to 1832.

It depicts Mt Fuji in early autumn when the wind is southerly, and the sky is clear, and the rising sun can turn Mount Fuji red.

Hokusai captures this moment with abstraction but symbolic specificity. The three shades of deepening blue of the sky mirror the three hues of the mountain.

The snow at the peak of the mountain contrast with the dark shadows of the forest at its base. The delicate clouds balance Mt. Fuji’s solid symmetrical shape on the right half of the image to the left.

There are variant impressions of this image. The original prints have a deliberately uneven blue sky, which increases the sky’s brightness and gives movement to the clouds.

The peak is brought forward with a halo of Prussian blue. Subsequent prints have a strong, even blue tone, and the printer added a new block, overprinting the white clouds on the horizon with light blue.

Later prints also typically employ an intense Bengal red pigment, which has given the painting its common name of Red Fuji.

Thirty-six Views of Mount Fuji is a series of landscape prints by Hokusai that depicts Mount Fuji from different locations and in various seasons and weather conditions.

Despite its name, it consists of 46 prints, with 10 of them being added after the initial publication.

This print and The Great Wave off Kanagawa, are perhaps the most widely recognized pieces of Japanese art. Both are superb examples of the Japanese art of Ukiyo-e, “pictures of the floating world.”

Although Ukiyo-e can depict anything from contemporary city life to classical literature, it was landscapes like this that earned Hokusai his fame. The saturated colors and stylized forms in such prints helped inspire the Impressionist and Post-impressionist movements decades later.

“Rainstorm Beneath the Summit” by Katsushika Hokusai

“Rainstorm Beneath the Summit” by Katsushika Hokusai

“Rainstorm Beneath the Summit” by Katsushika Hokusai is different in composition to ‘”South Wind, Clear Sky” because the two designs are deliberately contrasting.

In this print, the calm, bright dawn has given way to evening darkness in which a storm erupts around the base of the mountain, forming an echo of the slopes.

Thus Hokusai has set up a contrast between this print and his previous design. In this print, we see the back view during an evening storm.

Whereas in “Fine Wind, Clear Morning,” the composition is the front view of Mt. Fuji during the morning in fair weather.

“Thirty-six Views of Mount Fuji” is one of the world’s unique series of images of various conditions and vantage points of the mountain that is synonymous with Japan.

This series was such a public success that the publisher expanded the original conception to include forty-six prints in this series.

This series is also celebrated for its particular blue color, called “Berlin indigo” (bero-ai), a pigment that had been newly introduced by Dutch merchants to Japan.

Rainstorm Beneath the Summit

Katsushika Hokusai (1760 – 1849) began painting at the age of six, and at sixteen, he was apprenticed as an engraver and spent three years learning the trade.

At the same time, he began to produce his illustrations. At eighteen, he was accepted as an apprentice to Katsukawa Shunshō, one of the foremost ukiyo-e artists of the time.

Ukiyo-e is a genre of Japanese art that flourished from the 17th through the 19th centuries. Its artists produced woodblock prints and paintings of beautiful women, kabuki actors, sumo wrestlers, scenes from history and landscapes.

The mountain with a snow-capped peak is Mount Fuji, which in Japan is considered sacred and a symbol of national identity.

Mount Fuji is an iconic figure in many Japanese representations of famous places, as it is regarded as a symbol of beauty.

Mount Fuji’s exceptionally symmetrical cone, which is snow-capped for about five months a year, is a well-known symbol of Japan. Mount Fuji has “inspired artists and poets and been the object of pilgrimage for centuries.”

A Tour of Japanese Art

“There are two kinds of a fool:
those who have never climbed Mount Fuji,
and those who have climbed it more than once.”
– Japanese Proverb