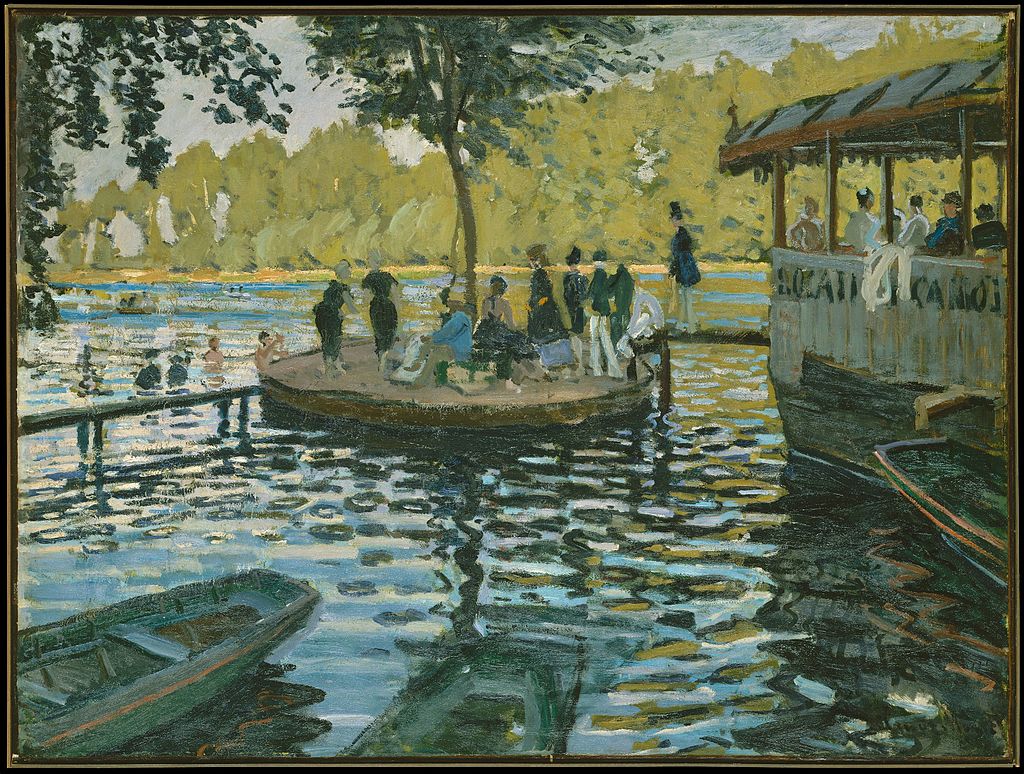 La Grenouillère was painting by both Pierre-Auguste Renoir and Claude Monet at the same time.

They depicted the small island planted with a single tree, linked by gangplanks to the Île de la Grenouillère and to the fashionable La Grenouillère floating restaurant and boat-hire at Croissy-sur-Seine near Bougival.

The famous floating café “La Grenouillère” is where Claude Monet and Pierre-Auguste Renoir met at the end of the summer of 1869 to paint their first Impressionist paintings.

The two impoverished friends and artists sat side by side, in the early days of Impressionism at the same time to create their unique versions of La Grenouillère.

4 Paintings created side by side, at the same time by Claude Monet and Pierre-Auguste Renoir

“La Grenouillère” by Claude Monet depicts “Flowerpot Island”, also known as the Camembert, and the gangplank to La Grenouillère, a floating restaurant and boat-hire on the Seine at Croissy-Sur-Seine.

He was accompanied by Pierre-Auguste Renoir, who also painted the scene at the same time.

This Claude Monet sketch captures his experience of fleeting visual effects or impressions that changed from moment to moment. These sketches were an essential step towards Impressionism.

“La Grenouillère” by Pierre-Auguste Renoir depicts the La Grenouillère which was a popular middle-class resort consisting of a spa, a boating establishment, and a floating café.

Monet and Renoir both recognized in La Grenouillère an ideal subject for the images of leisure they hoped would sell.

It was a resort on the river Seine some 12 kilometers west of Paris. It had become a popular weekend retreat from the city during the 1860s.

Monet made several oil sketches at the resort, including this picture, in preparation for a large painting of the site that he planned to exhibit.

Painted quickly these studies have a directness and immediacy, Monet was painting what he saw, without any attempt to compose a scene.

Monet concentrated on the repetitive elements, the ripples on the water, the foliage, the boats, the human figures to weave a fabric of brushstrokes that deliver a robust descriptive quality. 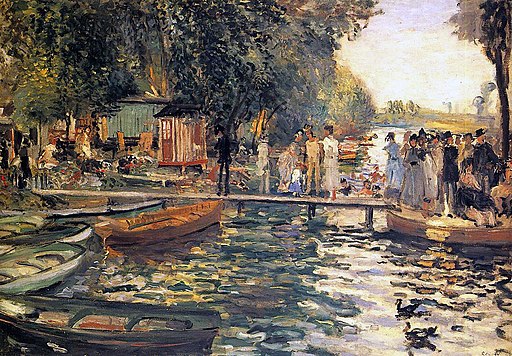 “La Grenouillère” by Pierre-Auguste Renoir depicts the La Grenouillère resort promoted as “Trouville-sur-Seine”, it was located on the Seine near Bougival, easily accessible by train from Paris and had just been favored with a visit by Emperor Napoleon III with his wife and son.

As a celebrator of beauty and especially feminine sensuality, Renoir’s paintings are notable for their vibrant light and saturated color, most often focusing on people in intimate and candid compositions.

He was a prolific artist who created several thousand paintings. The single most extensive collection of his works, about 181 pictures, is part of the Barnes Foundation in Philadelphia.

Claude Monet’s La Grenouillère–Can We Be Serious and Lighthearted at Once?

“I had so much fire in me and so many plans.”
– Claude Monet