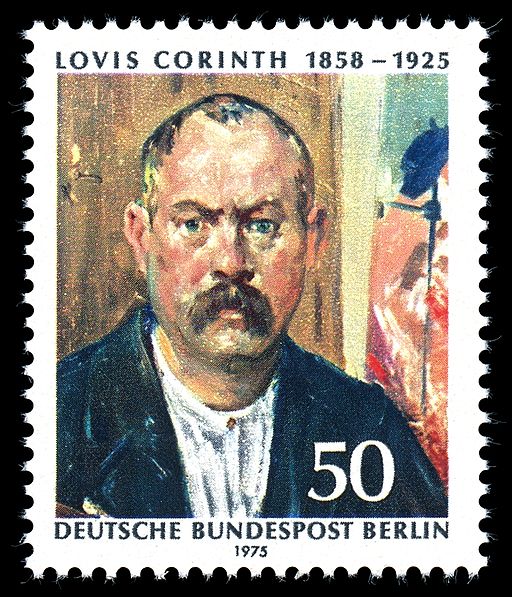 Lovis Corinth (1858 – 1925) was a German artist whose work realized a synthesis of impressionism and expressionism. Corinth studied in Paris and Munich and joined the Berlin Secession group.

Corinth was initially antagonistic towards the expressionist movement, but after a stroke in 1911, his style loosened and took on many expressionistic qualities.

Corinth’s use of color became more vibrant, and his art gained increased vitality and power.

In 1937, Nazi authorities removed 295 of his works from public collections and transported seven of them to Munich, where they were displayed in March 1937 in the Degenerate Art Exhibition.

Innocence by Lovis Corinth depicts a young girl stripped to the waist in frontal view, crossing his arms over her chest with her hands partially covering her breasts.

A white and olive green garment covers her belly below the arms. Her right nipple is visible between the middle and index fingers of the left hand.

Her head is on a slight slant, and she wears a violet scarf, which hangs behind her right shoulder as a veil, forming the background to her body.

She looks melancholy and absent-mindedly dreamy. The canvas is marked in the upper left corner with the title of “Innocentia” and signed in the top right corner with Lovis Corinth. Museum:  Lenbachhaus

In “Self-portrait with Model” by Lovis Corinth, the artist is making a statement about his painting process and the subtle relationship between model and artist.

Corinth is showing us a painted model representing the artist, while an artist in the painting is likewise the model.

Yet on the left-hand side of this picture, the two are interwound, highlight the complicated relationship between the artist and his subject.  Museum: Kunsthaus Zürich

Portrait of a Woman with Hat

In 1955, she received the Cross of Merit (Steckkreuz) of the Federal Republic of Germany, “For her special services to German literature.” Museum: Lenbachhaus

“Portrait of the painter Karl Strathmann” by Lovis Corinth depicts Carl Strathmann (1866 – 1939), a German painter and illustrator of Art Nouveau and symbolism.

Corinth wrote that “Strathmann, in his persistence, immerses himself in the ornamental patterns of his paintings down to the smallest detail and seeks to compose new motifs into the details.” Museum: Lenbachhaus

The painting shows the artist’s father, sitting in a chair at a table, in a frontal portrait, looking directly at the artist and the viewer. He wears dark trousers with a dark waistcoat, a white shirt, and a dark coat.

Above the vest is a gold watch chain, and on his left hand, which wears a gold ring, he holds a cigar while resting his head on his right hand.

The right elbow rests on the table with a golden wine cup, and a red rose on a bright table covering. His father died five years after this painting. Museum: Lenbachhaus

These nine years in Munich were not his most productive, and he became better known for his drinking. Museum: Lenbachhaus

The Nazis held the Degenerate Art Exhibition in Munich in 1937, which displayed 650 modernist artworks.

The art was deliberately hung chaotically and disparagingly, with accompanying labels that deriding the art.

After the show, the paintings were mainly sold in Switzerland at auction to raise funds for Nazi causes.

Museums acquired some pieces; private collectors purchased others. Ironically, high-ranking Nazi officials took many for their private use. Hermann Göring took 14 valuable pieces, including a Van Gogh and a Cézanne.

In 1939, the Berlin Fire Brigade burned about 4000 paintings, drawings, and prints that had little value on the international market. This destruction of thousands of artworks was an act of unprecedented Art vandalism.

“In the autumn of 1884, I went to Paris. The spirit that greeted me was certainly more impressive than in Germany.”

“I admire the French painting from Watteau to Monet; otherwise, there is nothing that can be said to be exceptional.”

“My conscious motivation was to bring German art up to the highest level.”

“Diseases, a paralysis of the left side, a monstrous right-hand tremor …
and caused by previous excesses with alcohol,
prevent me from doing any calligraphic craftsmanship.”

“A constant effort to achieve my goal
– I’ve never reached the degree hoped – has exacerbated my life,
and every job has ended with the depression of having to go on with this life.”

“A burning ambition has always tormented me.
There has not been a day when I did not curse my life and did not want to terminate it.”

“My conscious motivation was to bring German art up to the highest level.”
– Lovis Corinth