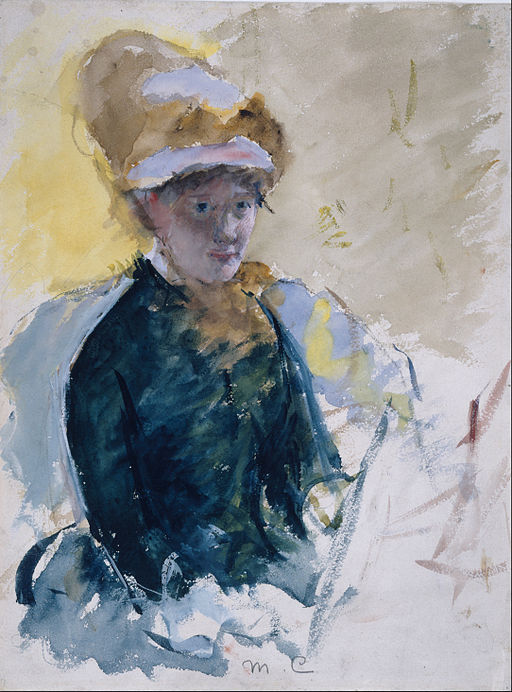 Cassatt enjoyed the wave of feminism that occurred in the mid-1800s, allowing relatively more accessible educational opportunities, and she became an outspoken advocate for women’s equality, campaigning with her friends for equal travel scholarships for students in the 1860s, and the right to vote in the 1910s.

A Virtual Tour of Mary Cassatt

“The Child’s Bath” by Mary Cassatt was inspired by Japanese woodblocks and depicts a mother or female carer bathing of a child.

The female figure holds up the child firmly and protectively while washing the child’s feet. The left arm of the child braces against the mother’s thigh, while the other hand is holding on the child’s leg.

The painting reflects the dignity of motherhood. Cassatt was heavily influenced by her fellow Impressionist peers, especially Edgar Degas.

In 1890, she was struck by the prints of the Japanese woodcuts. Cassatt was drawn to the simplicity and clarity of the Japanese design, and the skillful use of blocks of color. Japanese prints and Degas inspired the perspective of this painting. Museum: Art Institute of Chicago

“Mother and Child” by Mary Cassatt depict a mother washing a child after getting up from his nap. The mother holds the child firmly and protectively while washing the child’s feet.

The right arm of the child embraces the mother’s neck and shoulder, while the other hand is used to balance its weight on the bed. The painting reflects the dignity of motherhood.

“The Boating Party” by Mary Cassatt depicts a woman, baby, and man in a sailboat. It is one of her largest oil paintings and is an unusual painting compared to Cassatt’s other artworks.

While it does show her familiar theme of a mother and child, most of her other pictures are set in domestic interiors or gardens. In this painting, Cassatt expertly contrasts the dark figure of the oarsman with colorfully dressed figures of mother and child.

In 1890 Cassatt visited the great Japanese Print exhibition in Paris, and she started collecting Japanese prints, which had a significant influence on her.

In this picture, Cassatt placed the horizon at the very top of the frame in the Japanese fashion. Museum: National Gallery of Art, DC

Woman with a Pearl Necklace in a Loge

“Woman with a Pearl Necklace in a Loge” by Mary Cassatt is one of a series of theatre scenes in Paris created by Cassatt in the late 1870s.

This work shows a woman, assumed to be her sister Lydia seated in front of a mirror with the balconies of the Paris Opéra House reflected behind her.

This painting demonstrates the influence of Edgar Degas, one of her close friends, particularly in the depiction of the effects of the lighting. Cassatt and Degas had a long period of collaboration.

The two had studios close together, and Degas got into the habit of visiting Cassatt’s studio and offering her advice and help. He also introduced her other Impressionist artists and the city’s nightlife. Museum:  Philadelphia Museum of Art

Offering the Panel to the Bullfighter

“Offering the Panel to the Bullfighter” by Mary Cassatt depicts a young woman flirtatiously offering a glass of water to a bullfighter, who dips “panal” (honeycomb) into it to make an energizing drink.

Cassatt made several paintings of local Spanish subjects during her stay in Spain in 1873. The vibrant colors and brushwork are inspired by Diego Velázquez, whose “fine and simple manner,” which Cassatt studied during her travels to Madrid and Seville.

The Bullfighter costume is depicted with the decorations and elaborateness of the torero’s outfit that the Spanish call the “suit of lights.”

The flamboyant matador costume is part of the drama of a  bullfight, which is considered performance art. Museum: Clark Art Institute

Lady at the Tea Table

Similarly, the faint blue hues used in the background draw the eye to the deeper blues of Riddle’s eyes and the porcelain. Museum:  Metropolitan Museum of Art – MET

Paintings of Children by Mary Cassatt

“Women should be someone and not something.”

“There’s only one thing in life for a woman; it’s to be a mother… A woman artist must be… capable of making primary sacrifices.”

“Sometimes it made him [Degas] furious that he could not find a chink in my armor, and there would be months when we just could not see each other, and then something I painted would bring us together again.”

“There are two ways for a painter: the broad and easy one or the narrow and hard one.”

“Cezanne is one of the most liberal artists I have ever seen… he grants that everyone may be as honest and as true to nature from their convictions; he doesn’t believe that everyone should see alike.”

“I used to go and flatten my nose against that window and absorb all I could of his art. It changed my life. I saw art then as I wanted to see it.”

“I have touched with a sense of art some people-they felt the love and life. Can you offer me anything to compare to that joy for an artist?”

“Acceptance, under someone else’s terms, is worse than rejection.”

“I am independent! I can live alone, and I love to work.”

“I think that if you shake the tree, you ought to be around when the fruit falls to pick it up.”

“American women have been spoiled, treated, and indulged like children; they must wake up to their duties.”

“I have not done what I wanted to, but I tried to make a good fight.”

“It is as well not to have too great an admiration for your master’s work. You will be in less danger of imitating him.”

“The first sight of Degas’ pictures was the turning point of my artistic life.”

“At some future time, I shall see New York the artist’s ground. I think you will create an American School.”

“Why do people so love to wander? I think the civilized parts of the world will suffice for me in the future.”

Biography of Mary Cassatt for Kids: Famous Artists for Children

“Women should be someone and not something.”
– Mary Cassatt