A Virtual Tour of Michelangelo

“David” by Michelangelo was completed in 1504 and depicts the Biblical hero David, who killed the giant Goliath with a rock from his sling.

David is represented just before his battle with Goliath, tense and ready for combat, Michelangelo has captured the moment between decision and action, during the war between Israel and the Philistines. Museum: Galleria dell’Accademia, Florence, Italy

Pietà by Michelangelo depicts the body of Jesus on the lap of his mother Mary after the Crucifixion. The Pietà theme is of Northern European origin.

However, Michelangelo’s interpretation of the Pietà was unprecedented in Italian sculpture. It balanced the Renaissance ideals of classical beauty together with extraordinary naturalism.

Christ’s face does not reveal signs of his suffering. Michelangelo did not want his version of the Pietà to represent death, but rather to show the serene faces and relationship of Son and Mother.

It is the only piece Michelangelo ever signed. Museum: St. Peter’s Basilica, Vatican City 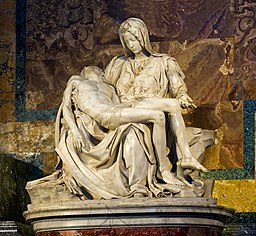 Moses, by Michelangelo, depicts the biblical figure of Moses with horns on his head. It is based on a description in chapter 34 of Exodus in the Latin translation of the Bible used at that time.

Moses is seated with his right arm protecting the stone tablets bearing the Ten Commandments while fondling his beard with two fingers. His long beard is rendered in sculpture, as soft flowing ringlets of hair that flow like waterfalls from his face.

Moses’s other hand displays his throbbing veins, tense muscles, at the tail end of his snake-like beard. He appears alert to any threat and ready to defend the tablets with violent action.

The Sistine Chapel is the room where the College of Cardinals are locked in and required to decide on the next Pope.

The walls and the ceiling are masterfully decorated. The walls are painted with frescoes by various artists, and Michelangelo painted the Masterpiece of the ceiling fresco. Museum: Vatican Museums

Studies of a Reclining Male Nude

“Studies of a Reclining Male Nude” is a rare drawing by Michelangelo to have survived. It shows the reclining figure of Adam reaching out to God the Father, whose touch grants him life.

This study of Adam was in preparation for the fresco of ‘The Creation of Man.’ It was used for the painting on the vault of the Sistine Chapel. It was drawn in dark red chalk over some stylus underdrawing.

The reverse side of this paper has a drawing, also in red chalk, of the “Head of a Youth,” turned to the right, wearing a headscarf. Museum: The British Museum

“Young Slave” by Michelangelo is a marble sculpture that Michelangelo started about 1525–1530. It is part of the “unfinished” series of prisoners called “Prigioni” in Italian “intended for the Tomb of Julius II.

In the first version of the tomb of Julius II had a series of prisoners planned for the lowest level of the mausoleum.

It was to be a series of more-than-life-size statues of chained figures in various poses, leaning on the pilasters which framed a set of niches, each of which would contain a “Winged Victory.” Museum: Galleria dell’Accademia, Florence, Italy

“Bearded Slave” by Michelangelo is a marble sculpture from about 1525–1530 and forms part of the series of “unfinished” Prigioni intended for the Tomb of Pope Julius II.

In the first version of the tomb of Julius II had a series of prisoners or Prigioni” in Italian, planned for the lowest level of the mausoleum.

It was to be a series of more-than-life-size statues of chained figures in various poses, leaning on the pilasters, which framed a set of niches. Museum: Galleria dell’Accademia, Florence, Italy

“Rebellious Slave” by Michelangelo is a marble sculpture created for the second version of the tomb of Pope Julius II, which was commissioned by the Pope’s heirs in 1513.

Although the initial plans by the Pope for a gigantic mausoleum were set aside, the work was still monumental, with a corridor that was to be richly decorated with sculpture.

Michelangelo was commissioned for this project, and among the first pieces completed were the two “Prigioni” renamed the “slaves” in the nineteenth century. Museum:  Musée du Louvre

Doni Tondo by Michelangelo portrays the Holy Family consisting of the Child Jesus, Mary, and Joseph in the foreground.

John the Baptist is shown in the right with his rough clothing holding a long wooden rod. Five mostly nude male figures are featured at the back by a low wall in the background.

These bare figures have been interpreted in a variety of ways. Mary is the most prominent figure in the composition, sitting on the ground grass with a book on her lap. Joseph is positioned behind Mary as if he is protecting her.

The golden material over Joseph’s legs forms a de facto throne. The Child is being transferred between Joseph and Mary.

Mary and Joseph gaze at Christ. John the Baptist, the patron saint of Florence, is commonly included in Florentine works depicting the Madonna and Child. Museum: Uffizi Gallery

“Leda and the Swan” after Michelangelo

This “Leda and the Swan” painting is a very old copy made after the original painting of a now-lost painting that Michelangelo made in 1530.

Michelangelo showed the Greek god Zeus in the form of a swan seducing Leda, Queen of Sparta. Leda’s pose was influenced by the iconography of older sarcophagus reliefs and gems and is similar to Michelangelo’s marble sculpture “Night” in the Medici Chapel, Florence.

Michelangelo’s Leda echos a painting of a hard-edged marble relief sculpture, rather than the soft voluptuous depictions of a Raphael or Titian.

It is proposed that this copy was made from Michelangelo’s original by Rosso Fiorentino, an Italian patron of the arts. It is also believed that the original was burnt on the grounds of indecency, at the end of the seventeenth century. Museum: National Gallery, London

Yet, the unusually high quality of the artwork encourages other experts to attribute the work directly to Michelangelo. Museum:  Ashmolean Museum

Michelangelo Biography: Who Was This Guy, Really? | Art History Lesson

“An artist must have his measuring tools not in the hand, but the eye.”

The Renaissance – the Age of Michelangelo and Leonardo da Vinci