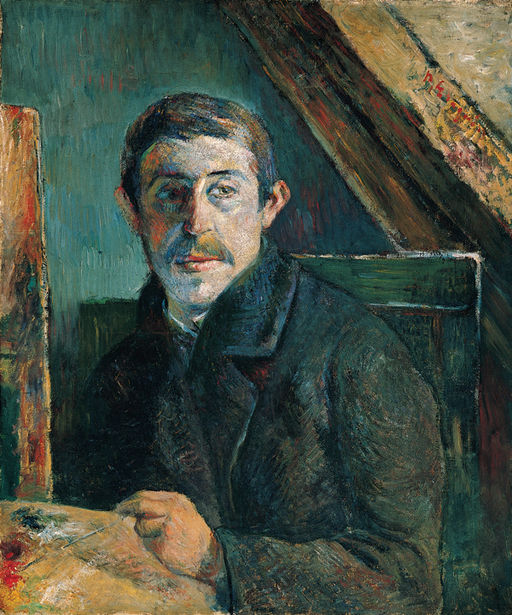 Self Portrait by Paul Gauguin

Self Portrait – Gauguin in front of his Easel by Paul Gauguin was painted in Denmark just before Gauguin decided to return to Paris. This painting is both somber and defiant in mood and is the first of his many self-portraits.

Painted as he was deciding that rather than remaining jobless in Copenhagen, he would return to Paris to pursue his art career.

Examination of this painting with infrared light and radiographs has revealed that Gauguin made significant changes. Initially, he portrayed himself in profile and included reproductions of his paintings in the background.

In the final version, he is in full profile, but depicted as left-handed, like his image in a mirror. He showed himself cramped in a small attic space and cold, with the lapels of his jacket tightly closed.  His eyes are looking towards another future.

Self Portrait – Gauguin in front of his easel 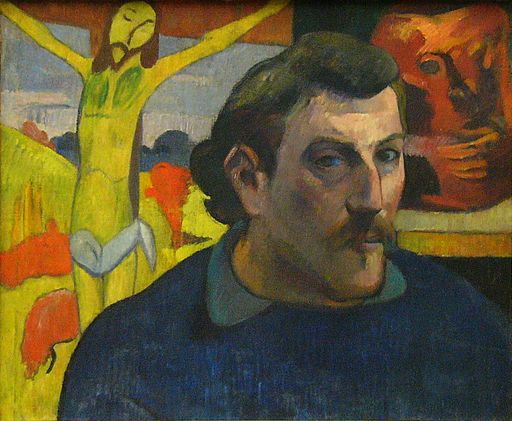 Portrait of the Artist with the Yellow Christ by Paul Gauguin was painted on the eve of Gauguin’s first trip to Tahiti. He was virtually unknown at the time and abandoned by his wife, who had gone back to Denmark with their children.

Gauguin was misunderstood and was having trouble obtaining an official mission to settle in the colonies.

Gauguin’s stare expresses his burdens as well as his determination to pursue his art. In the background, he has included two works he had painted the previous year.

On the left is his painting of “The Yellow Christ,” the image of sublimated suffering, which he painted in his likeness. Christ’s arm stretched above his head suggests a protective gesture.

The yellow on the left is in contrast to the red of the pot on the right. The container is in the form of a “Grotesque Head” on the right.

A glazed stoneware pot, which is a self-portrait from early 1889, which Gauguin described as a “head of Gauguin the savage,” has a grimacing image and primitive modeling.

Gauguin portrayed himself between the spiritual and the beast, between Synthetism and Primitivism.

Paul Gauguin (1848 – 1903) was a French post-Impressionist artist who was not appreciated until after his death.

Gauguin is now recognized for his experimental use of color and the Synthetist style that were distinctly different from Impressionism.

His work was influential to the French avant-garde and many modern artists, such as Pablo Picasso and Henri Matisse.

Gauguin’s art became famous after his death. Gauguin was an essential figure in the Symbolist movement as a painter, sculptor, printmaker, ceramist, and writer.