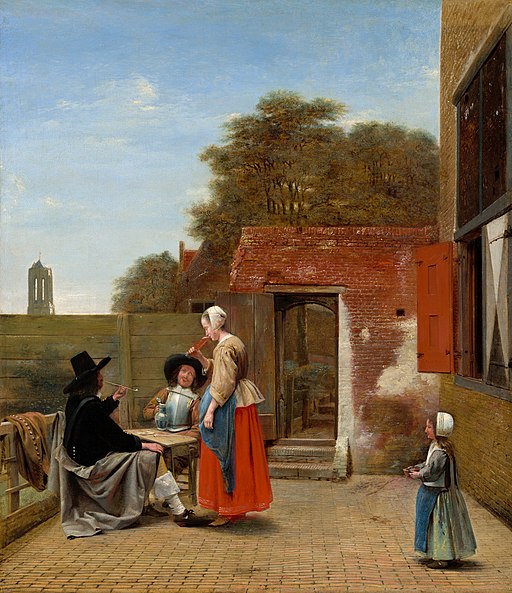 Women are going about their daily work or attending to visitors, such as the men seen in this painting, which was a frequent theme in De Hooch’s work. De Hooch worked in the city of Delft from about 1652 to 1660.

His work showed astute observation of the details of everyday life and exhibited a sophisticated treatment of light similar to those of Vermeer, who lived in Delft at the same time as de Hooch.

De Hooch painted everyday scenes in which his compositions emphasized the geometry of architectural elements. The doors, windows, and shutters, floor tiles, and bricks were all carefully detailed. 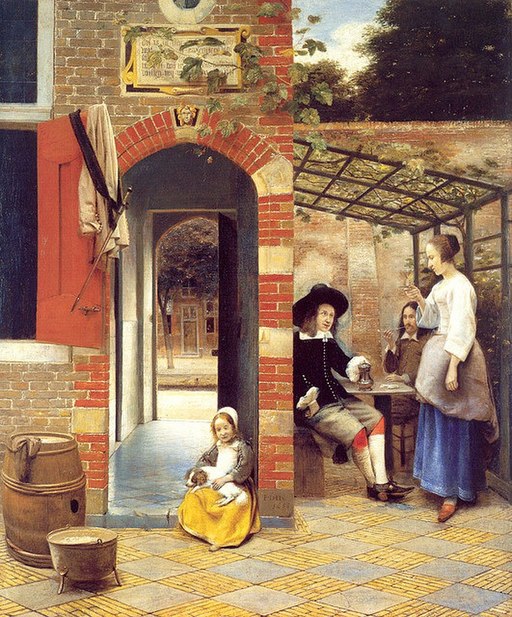 Drinkers in the Bower by Pieter de Hooch depicts a view of the back courtyard of a house. The view looks towards a building, which has an arched passage.

Through the passageway is a view of the street in front of the house. In the foreground at the step of the passage, is seated a child with a dog in her lap.

On the right half of the composition under a covering of vine trellis, are two men seated at a table. A woman is standing near them with a glass of wine in her hand.

This painting is signed and dated with an inscription “P.D.H. 1658” on the archway stone next to the young girl.

The archway is identical to the one in De Hooch’s painting titled, The Courtyard of a House in Delft, but the right half of the courtyard is very different.

Were these two paintings depicting a passageway that had special significance for De Hooch? And was it his home’s courtyard and his daughter? 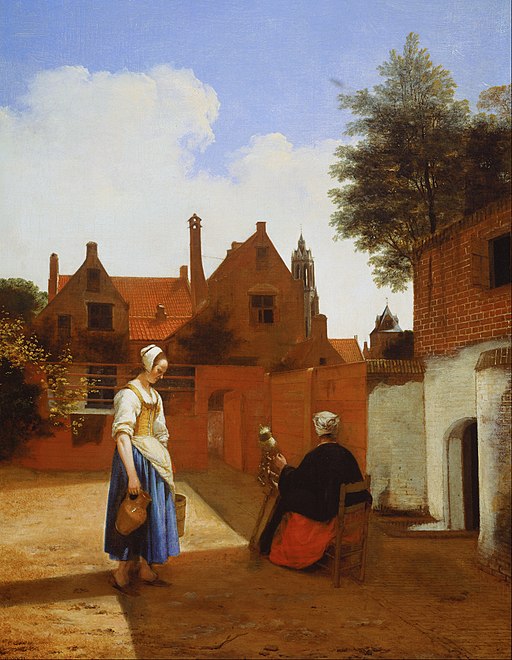 “Courtyard in Delft at Evening: a Woman Spinning” by Pieter de Hooch depicts two women working on their domestic tasks. The standing figure who is walking from the sunlight into shadow is carrying a jug and a bucket.

The seated figure seen in shadow is spinning wool. This painting is one of De Hooch’s earliest paintings of a courtyard scene, dated 1657, during a time that when De Hooch and Vermeer were both working in Delft.

The viewer is invited to enter what is essentially a private world.

De Hooch knew Delft well as he was married in Delft in 1654, and while in Delft, de Hooch trained with the painters Carel Fabritius and Nicolaes Maes, who were early members of the Delft School.

He had also become a member of the painters’ guild in Deft, so he knew the city well and added detail he was familiar with, such as on the right of the painting beyond the house could be seen two towers.

The taller tower is the Nieuwe Kerk (New Church), and the smaller one is the Town Hall.

De Hooch was born in Rotterdam, but little is known of his early life. De Hooch learned to paint from painting instructors who were early members of the Delft School.

He became a member of the painters’ guild of Saint Luke in 1655, two years after Vermeer.

His work showed close observation of the details of everyday life while also functioning as morality tales. In the 1660s, he began to paint for wealthier patrons in Amsterdam and is known for merry company scenes and family portraits in opulent interiors.

It is best known for images of domestic life, views of households, church interiors, courtyards, squares and the streets of that city. The Delft School of the Painting was made famous by Pieter de Hooch and Johannes Vermeer.

“They who tend to their own gardens do not see the weeds of their neighbors.”
– Dutch Proverb