“Broken Obelisk” by Barnett Newman is a sculpture that fuses the universal symbols of ancient Egypt, the pyramid, and the obelisk to reimagine the inverted obelisk shaft as a beam of light.

There is a tension between the upward sweep of the pyramid and the plunging, downward thrust of the obelisk.

At the top of the sculpture, the inverted obelisk is broken off jaggedly, an echo of broken ancient monuments. This broken, rough edge contrasts sharply with the symmetric geometry of the rest of the sculpture.

Our perception and association of pyramids and broken columns with ancient history has been reinterpreted into a current model of experience beyond the ordinary or physical level.

“Broken Obelisk” is a sculpture in the public art space that points to philosophical insight into our reality, and existence.

“Newman’s pursuit of the sublime lay less in nature than in culture. This enabled him to pick ancient, man-made forms and return them to pristine significance without a trace of piracy.”

“Broken Obelisk” was designed between 1963 and 1967 and is fabricated from three tons of Cor-Ten steel, which acquires a rust-colored patina. It seems to defy gravity.

This colossal steel sculpture is about twenty–five feet high and formed of two parts. The lower part is a pyramid of about ten feet tall. The giant obelisk extends up another fifteen feet.

The inverted obelisk has a pointed tip, which rests on the tip of the pyramid. The point at which the two parts meet is about two inches square, which is significantly small in comparison to the overall sculpture.

The two pieces are held together by a single metal pole, which runs through the inside of the pyramid and obelisk.

The “Broken Obelisk” sculpture first appeared in 1967 on display outside the Corcoran Gallery of Art in Washington, D.C.

Several “Broken Obelisk” sculptures are exhibited around the world: 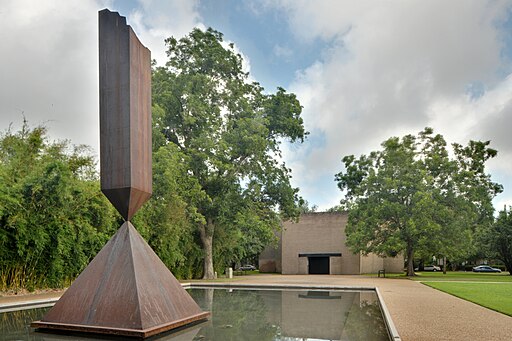 Broken Obelisk in front of Rothko Chapel in Houston, Texas.

Weathering steel, often referred to as Cor-Ten steel, is a steel alloy which was developed to eliminate the need for painting, and form a stable rust-like appearance after several years’ exposure to weather.

Its distinctive properties are corrosion resistance and tensile strength, and it is available as a strip-mill plate or in sheet forms.

The surface oxidation of weathering steel takes six months, but surface treatments can accelerate the oxidation to as little as a few hours.

Weathering steel is popularly used in outdoor sculptures for its rustic antique appearance. It is also used in bridges and other large structural applications.

Barnett Newman (1905 – 1970) was an American artist and a significant figure in abstract expressionism.

His paintings are composed to communicate a sense of locality, presence, and contingency.

“Broken Obelisk” is his most significant and best known of his six sculptures. 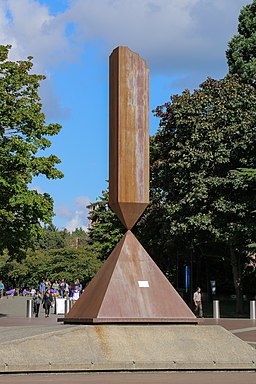 Broken Obelisk in the University of Washington’s Red Square

“Love is the joy of the good, the wonder of the wise, the amazement of the Gods.”
– Plato