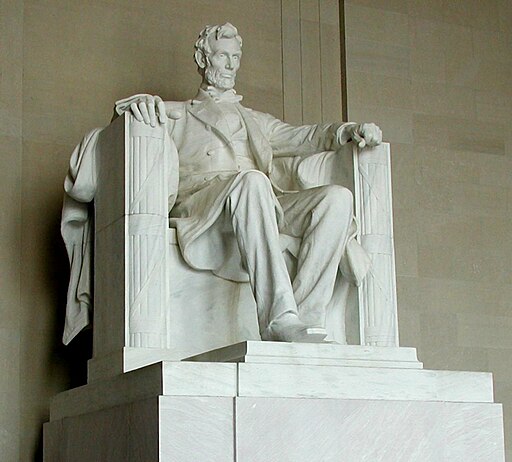 The figure of Lincoln gazes directly ahead and slightly down with an expression of gravity and solemnity. His frock coat is unbuttoned, and a large United States flag is draped over the chair back and sides.

Daniel Chester French sculpted the work in the Beaux-Arts and American Renaissance style traditions. The work was unveiled at the memorial’s formal dedication in 1922.

French paid special attention to Lincoln’s expressive hands and used his own fingers’ casts to achieve the correct placement.

The hands rest on the enormous arms of a circular, ceremonial chair, the fronts of which bear fasces, emblems of authority from Roman antiquity.

The 170-ton statue is composed of 28 blocks of white Georgia marble and rises 30 feet (9.1 m) from the floor, including the seated figure with armchair and footrest upon a high pedestal.

Daniel Chester French was selected in 1914 by the Lincoln Memorial Committee to create a Lincoln statue as part of the memorial.

French had already created a major memorial statue of Lincoln for the Nebraska State Capitol in 1912. His studies of Lincoln had prepared him for the challenging task of the larger statue.

French’s collaborators, the firm of Piccirilli Brothers, were commissioned to carve the large sculpture in marble from a quarry near Tate, Georgia.

Many believe that Lincoln is shown using sign language to represent his initials. His left hand was shaped to form an “A” and his right hand to form an “L.”

The National Park Service denies the story, calling it an urban legend. However, French had a son who was deaf, and the sculptor was familiar with sign language.

French may also have wanted to recognize Lincoln for having signed federal legislation giving Gallaudet University, a university for the deaf, the authority to grant college degrees.

Lincoln sits on a chair, the fronts of which bear fasces, emblems of authority from Roman antiquity.

Fasces is a bound bundle of wooden rods, which had its origin in the Etruscan civilization and was passed on to ancient Rome, symbolizing a magistrate’s power and jurisdiction.

Sometimes the wooden rods including an axe with its blade emerging. The axe was originally associated with the symbol of the double-bitted axe. Originally from Crete, it is one of the oldest symbols of Greek civilization.

The image of the bound bundle of wooden rods has survived in the modern world as a representation of magisterial or collective power, law, and governance.

The fasces symbolized power and authority in ancient Rome. By republican times, the use of the fasces was surrounded by tradition and protocol.

Governments and other authorities have used the image of the fasces as a symbol of power since the end of the Roman Empire. It has been used to hearken back to the Roman republic, particularly those who see themselves as successors to the old republic ideals.

Daniel Chester French placed the President in a classical chair, including fasces, a Roman symbol of authority, to convey that the subject is for all the ages.

The Piccirilli Brothers were an Italian family of renowned marble carvers and sculptors who carved many of the most significant marble sculptures in the United States, including Abraham Lincoln in the Lincoln Memorial, Washington, D.C.

In 1888, Giuseppe Piccirilli (1844–1910), a well-known stone carver in Italy, brought his family to New York City. He came from a long line of stone carvers, unbroken since the days of the early Renaissance.

All six of Giuseppe’s sons were trained as marble cutters and carvers. Although the Piccirilli Brothers were known primarily as architectural modelers and the carvers of other sculptors’ works, two of the brothers distinguished themselves as sculptors in their own right.