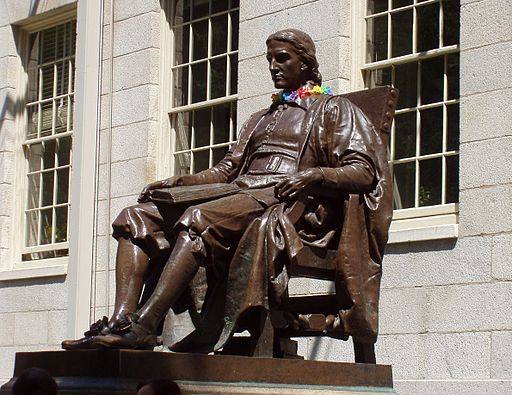 “John Harvard” by Daniel Chester French is a sculpture in bronze honoring clergyman John Harvard (1607–1638), who made a deathbed bequest to the “College,” which had just been undertaken by the Massachu­setts Bay Colony.

John Harvard’s gift to the school was £780 and‍ ‌his 400-volume scholar’s library. As an act of gratitude and as an example for future endowments, the College was named Harvard College.

There was no documentation on what John Harvard looked like, so the sculptor Daniel Chester French used a Harvard student descended from an early Harvard president as inspiration.

The young-looking clergyman is sitting, holding an open book on his knee. He wears clerical clothes from the seventeenth century, with low shoes, long, silk hose, loose knee-breeches, and a tunic belted at the waist, while a long cloak is thrown back and falls in broad folds.

‌The founding of the college was not the act of one but the work of many, and John Harvard was just one of the founders of the school, but the timing and generosity of his contribution have made him the namesake.

The statue was originally installed‍ ‌in 1848 at the western end of Memorial Hall. It was later moved in 1924 to its current location on the west side of Harvard Yard’s University Hall, facing Harvard Hall, Massachusetts Hall, and the Johnston Gate.

Tourists often rub the toe of John Harvard’s left shoe for luck, in the mistaken belief that doing so is a Harvard student tradition.

Harvard University is a private Ivy League university in Cambridge, Massachusetts. Established in 1636 and named for its first benefactor, Harvard is the oldest higher learning institution in the United States.

Its curriculum and student body were gradually secularized during the 18th century. Following the American Civil War, the college and affiliated professional schools transformed into a modern research university.

Harvard Yard is the oldest part of the Harvard University campus and its historic center. It contains freshman dormitories, libraries, Memorial Church, classrooms, and departmental buildings with senior officials’ offices.

The Yard is a grassy area of 22.4 acres (9.1 ha) and its perimeter fencing, principally iron, with some stretches of brick, has twenty-seven gates.

​A Virtual Tour of Public Art

“If you’re last in your class at Harvard, it doesn’t feel like you’re a good student, even though you really are. It’s not smart for everyone to want to go to a great school.”
– Malcolm Gladwell