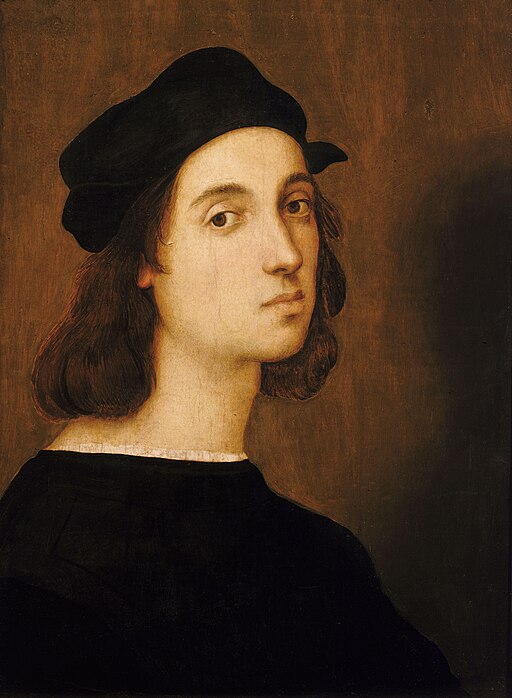 Raphael was enormously productive, despite his death at 37, he created a large body of work.

Many of Raphael’s works are in the Vatican Palace, where the frescoed Raphael Rooms were central, and the largest, work of his career. The best-known work is The School of Athens in the Vatican.

His career started in Umbria, and then he spent four years in Florence, absorbing the artistic renaissance of Florence. During his last twelve years in Rome, he mainly worked for two Popes and their associates.

After his death, the influence of his rival Michelangelo was more widespread. Then in the 19th century, Raphael’s harmonious works were reevaluated, and he regained his popularity for his many masterpieces.

Madonna in the Meadow

“Madonna in the Meadow” by Raphael depicts three figures in a meadow, all linked by looks and touching hands. The figures represent the Madonna with the Christ Child and Saint John the Baptist as a child.

The Madonna is shown wearing a gold-bordered blue mantle, set against a red dress, and with her right leg lying along a diagonal.

The blue symbolizes the church and the red Christ’s death, with the Madonna uniting the Church with Christ’s sacrifice.

In her hands, she holds up Christ, as he leans forward to touch the cross held by John. The poppy refers to Christ’s passion, death, and resurrection. Museum: Kunsthistorisches Museum 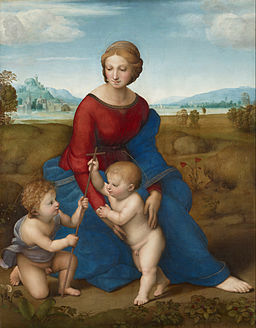 “The Alba Madonna” by Raphael depicts three figures all looking at the cross; they represent the Madonna with the Christ Child and Saint John the Baptist as a child.

The figures are grouped to the left in the round composition, and the outstretched arm of the Madonna and the resting elbow on the stump with her enveloping cloak balance the group image.

The blue symbolizes the church and the red Christ’s death, with the Madonna uniting the Church with Christ’s sacrifice.

In her lap, she holds Christ as he stretches out to touch the cross carried by John. Museum: National Gallery of Art, Washington, D.C.

“The School of Athens” by Raphael is one of the most famous frescoes of the Italian Renaissance. It is widely reproduced because of its artistry and because of the subjects portrayed.

In 1508, the 25-year old painter Raphael was summoned to the Vatican by Pope Julius II (1503-13) and given the most important commission of his career, the decoration of the Papal Apartments, including the Stanza Della Segnatura.

Raphael used the ample space with imposing coffered vaults to paint imagines of the greatest philosophers, mathematicians, thinkers, and artists of antiquity all in one area to symbolize the School of Athens. Museum: Vatican Museums 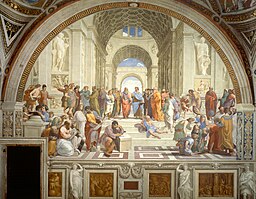 The “Small Cowper Madonna” by Raphael depicts Mary and the Christ Child in the 1500s Italian countryside. It was painted around 1505 during the High Renaissance.

The composition is centered on the seated Madonna in a bright red dress; she is shown with fair skin and blonde hair.

She is sitting comfortably on a wooden bench, and across her lap is a dark blue drapery upon which her right hand delicately rests.

There is also a sheer translucent ribbon elegantly flowing across the top of her dress and behind her head. The faintest golden halo miraculously surrounds her head.

In her left hand, she holds the baby Christ, who embraces her with one arm around her back, the other around her neck.

He also has blonde hair and is looking back over his shoulder with a coy smile. Museum: National Gallery of Art, Washington, D.C.

The Madonna of the Pinks

The botanical name of these flowers is dianthus, which in Greek mean ‘flower of God.’ The sunny landscape through the arched window shows a ruined building, symbolizing the collapse of the pagan world at the birth of Christ. 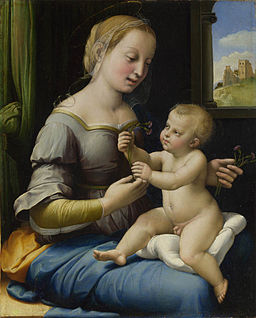 Christ Falling on the Way to Calvary

“Christ Falling on the Way to Calvary” by Raphael shows Christ carrying the cross to his crucifixion, at the moment when he fell.

The foreground of the painting is densely packed with emotional responses, especially his mother’s agony.

The group includes Simon of Cyrene, who is centered above Christ and is lifting Christ’s cross momentarily; also, the four Marys are depicted on the bottom right side of the painting.

Towering on either side of the composition is the Roman guards. This picture was created during the Italian High Renaissance and is part of the Museo del Prado collection in Madrid.

This masterpiece is an essential work for the development of Raphael’s style and reputation. Museum:     Prado Museum, Museo del Prado

The Marriage of the Virgin

“The Marriage of the Virgin” by Raphael depicts a marriage ceremony between Mary and Joseph.

A similar themed version by Perugino inspired Raphael, the differences in the two artworks are marked by Raphael’s more subtle and refined style.

In this artwork, Raphael also challenged himself to draw the temple in perspective, with evident care, that it is delightful to behold.

Painted during the Italian High Renaissance in 1504, this work was commissioned for a Franciscan church. Museum:        Brera Art Gallery, Pinacoteca di Brera

Castiglione is seated against an earth-toned background and wears a dark doublet with a trim of squirrel fur and black ribbon. On his head is a turban topped by a beret.

The lightest areas are the subject’s face, his white shirt which is billowed out in the front at his chest, and his folded hands. Castiglione is painted with a humane sensitivity characteristic of Raphael’s later portraits.

The soft contours of his clothing and rounded beard express the subtlety of the subject’s personality. Museum:         Musée du Louvre 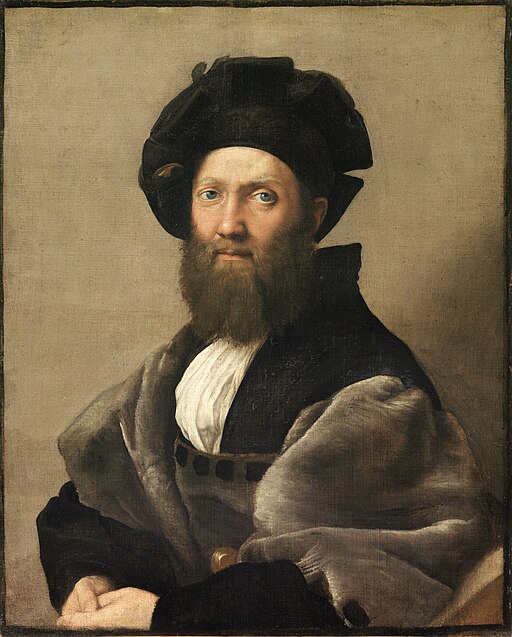 “St. Paul Preaching in Athens” by Raphael depicts the Apostle Paul in Athens, delivering at the Areopagus, and recounted in Acts of the Apostles in the Bible.

The Areopagus sermon is the most dramatic and fullest reported speech of the missionary career of Saint Paul. Paul had encountered conflict as a result of his preaching in Thessalonica.

He was taken to Athens as a place of safety. While he was waiting for his companions to arrive, Paul was distressed to see Athens full of idols.

So Paul went to the synagogue and the Agora on several occasions to preach about the Resurrection of Jesus. Museum: Victoria and Albert Museum 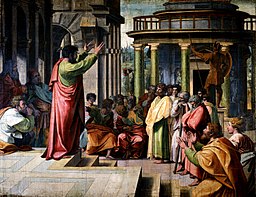 Madonna and Child Paintings by Raphael

The painting was the last of Raphael’s Florentine paintings before he left for Rome.

An inscription on the border of Madonna’s bodice, “MDVIII.R.V.PIN” indicates that it was painted in 1508 by Raphael of Urbino. Museum:         National Gallery of Art, DC 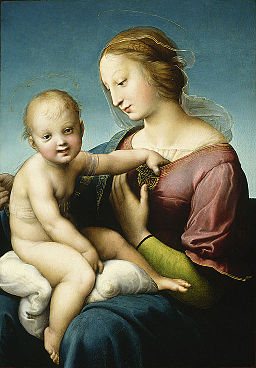 The book is in the center of the frame, which is emphasized by the touching hands that hold it. The inscription in the book introduces the Nones, which is recited daily by all monastic communities.

Raphael has created a meditation piece of profoundly quality, which explains why Raphael’s Madonna and Child Paintings were in such high demand. Museum:        Norton Simon Museum

This painting is an early work by Raphael showing the influence of Raphael’s teacher Perugino. Raphael created several different Madonna and Child compositions centered on the motif of the Madonna holding a book.

The painting is called the Solly Madonna because it was owned by the British banker and art collector Edward Solly (1776–1848). Museum:          Gemäldegalerie, Berlin

Conestabile Madonna” by Raphael, portrays the Madonna holding the Child while reading a book. The landscape of the background with snow-capped peaks is particularly unusual.

This small devotional piece was the last work painted by Raphael in Umbria before moving to Florence. In 1881 the painting was transferred from wood to canvas for its preservation.

During the preservation process, it was discovered that in the initial version, the Madonna was contemplating a pomegranate, the symbol of the Passion, instead of the book. Museum:          Hermitage Museum, Saint Petersburg

“Madonna del Granduca” by Raphael was probably in 1505, shortly after Raphael had arrived in Florence. The influence of Leonardo da Vinci, whose works he got to know there, can be seen in the use of Sfumato.

The painting is named after one of its owners, the Grand Duke of Tuscany, Ferdinand III. Museum:           Palazzo Pitti, Florence

The Expulsion of Heliodorus from the Temple

“The Expulsion of Heliodorus from the Temple” by Raphael depicts the episode in which a horseman assisted by two youths drives Heliodorus out the Temple in Jerusalem as he attempts to seize its treasures and money.

The narrative is based on a biblical episode from 2 Maccabees in which Heliodorus is ordered by the king of Syria, to take all the treasure from the Temple in Jerusalem.

The high priest Onias, who is pictured in the center, prays to God, who responded by sending the horseman and youths to expel Heliodorus.

Pope Julius II, Raphael’s patron, is shown on the left as a witness to the scene. He is on his high litter, which is carried by the men with poles on their shoulders.

The coins, which were in the bronze jar, are spilled on the floor. The money had been reserved for widows and orphans.

On the right, the horseman and youth are battling Heliodorus and his men, one of which has a large box object on his shoulders.

The menorah which is facing the praying priest in the center identifies the Jewish temple. Museum:  Vatican Museums 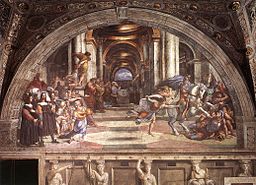 “Triumph of Galatea” by Raphael depicts the beautiful Galatea, from Greek Mythology, who had fallen in love with the peasant shepherd Acis.

Her consort, the jealous one-eyed giant Polyphemus, after chancing upon the two lovers together, lobbed an enormous pillar and killed Acis.

Raphael painted the scene of the nymph’s triumph surrounded by other sea creatures.

A Triton, partly man, part fish, is shown abducting a sea nymph, and behind them, on a seahorse, another Triton uses a shell as a trumpet. Galatea rides a shell-chariot drawn by two dolphins.

Raphael: A collection of 168 paintings

5 Things You Need to Know About Raphael

“Time is a vindictive bandit to steal the beauty of our former selves.”
– Raphael

“The Scream” by Edvard Munch
https://joyofmuseums.com/museums/europe/norway-museums/oslo-museums/national-museum-art-architecture-design-norway/scream-edvard-munch/