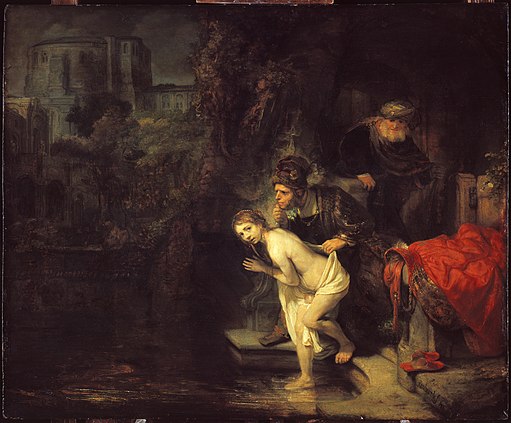 “Susannah and the Elders” by Rembrandt

Susannah and the Elders by Rembrandt depicts a religious theme in art that was not as common in Holland due to the rise of Protestantism and a loss of favor for the Catholic traditions.

However, Rembrandt continued to explore Biblical themes, despite their waning popularity in Holland.

Susanna and the Elders is a story from the Book of Daniel in the Bible. Susanna was a fair Hebrew wife who was falsely accused by lecherous voyeurs. As she bathes in her garden, two lustful elders secretly spy on the lovely Susanna.

When she makes her way back to her house, they accost her, threatening to claim that she met a young man in the garden unless she agrees to have sex with them.

Susanna refuses to be blackmailed and is arrested and about to be put to death for promiscuity.

Then the young Daniel interrupts the proceedings, shouting that the elders should be questioned to prevent an innocent’s death.

After being separated, the two men are cross-examined about details of what they saw. Their individual testimony was different.

The difference in their two stories makes the elders’ lie plain to all the observers. The false accusers are put to death, and virtue triumphs.

Rembrandt initially based his painting on one by his teacher, Pieter Lastman. However, it is notably different in composition except for some similarities in the background.

Rembrandt’s figures are all active, with one elder taking hold of Susanna’s clothing while she twists to getaway.

In 2015 it was discovered that the painter Sir Joshua Reynolds had altered Rembrant’s work after obtaining it for his collection in the late 18th century.

X-ray scans have revealed that large portions of the original work had been painted over, and other parts were removed.

Reynolds made modifications to most of the background, leaving only Rembrandt’s figures, the place in the distance, and a few foreground elements untouched.

It is unclear exactly why, but Reynolds was known for modifying works in his collection.

“Susannah and the Elders” by Rembrandt

Susannah and the Elders

“I am completely trapped.
For if I do this, it will mean death for me;
if I do not, I cannot escape your hands.
I choose not to do it;
I will fall into your hands, rather than sin in the sight of the Lord.”
– Susanna 22–23