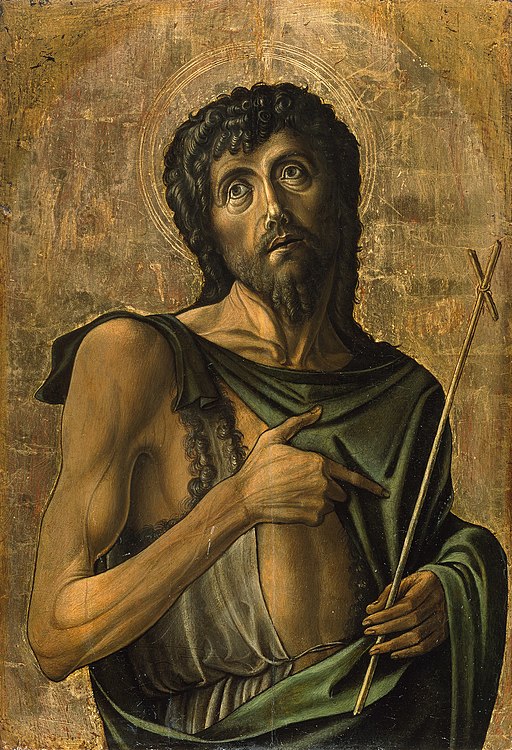 Saint John the Baptist in Art

Many famous painters have captured the story of John the Baptist in Art: 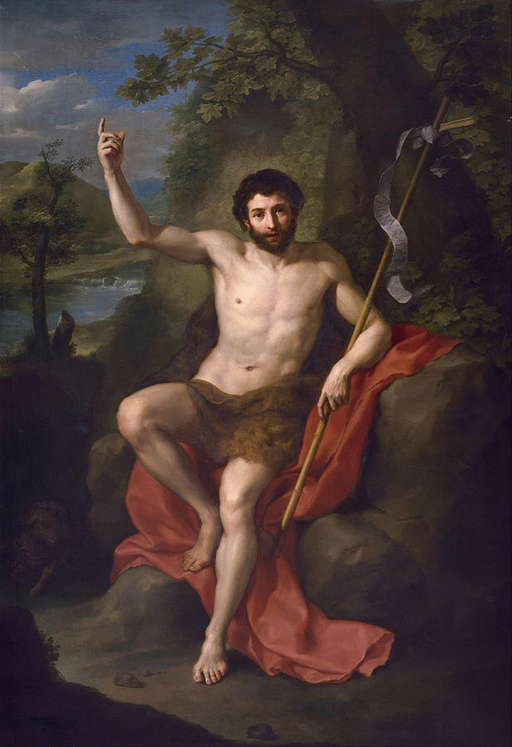 “Saint John the Baptist Preaching in the Wilderness” by Anton Raphael Mengs depicts the Saint as a preacher anticipating a messianic figure greater than himself.

Some scholars believe that John belonged to the Essenes, a semi-ascetic Judaic sect who expected a Hebrew messiah and who practiced ritual baptism. A river can be seen in the background of this painting.

John used baptism as the central symbol or sacrament of his pre-messianic movement. Most scholars agree that John baptized Jesus.

John was frequently shown in Christian art, identifiable by his reed cross and camel’s skin clothing:

“his raiment of camel’s hair, and a leather girdle about his loins; and his meat was locusts and wild honey.”

The artists, Anton Raphael Mengs (1728 – 1779), was a German painter, active in Dresden, Rome, and Madrid, who painted in the Rococo period of the mid-18th century. He became one of the precursors to Neoclassical painting, which replaced Rococo as the dominant painting style.

Mengs wrote about art, revealing his theory of art that sees perfection as attainable through a well-balanced fusion of diverse influences of Greek design combined with the expression of Raphael, the chiaroscuro of Correggio, and the color of Titian. 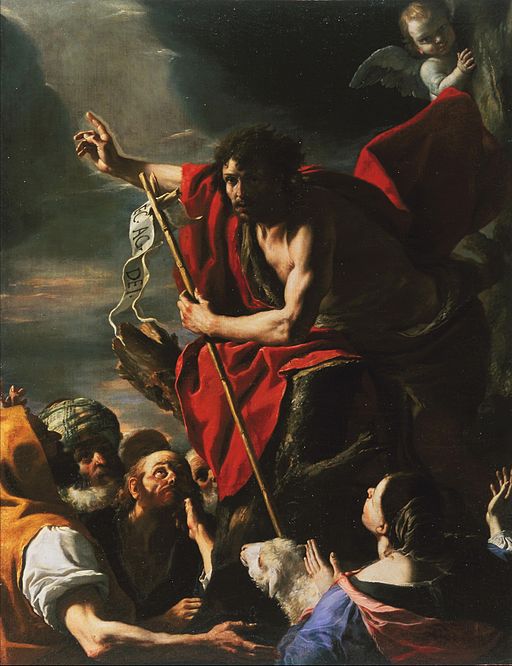 “St. John the Baptist Preaching” by Mattia Preti depicts John as the forerunner of Jesus, who announces Jesus’ coming. This painting shows John’s prophetizing and preparing the people for Jesus’ ministry as symbolized by his staff, which has a cross on top with a message.

St. John is shown preaching and pointing to the heavens urging his audience to remember that their reward is waiting in heaven, and their salvation is in God’s hands. Preti has included the symbols for St. John the Baptist frequently is shown in Christian art, identifiable including the reed cross, his camel’s skin clothing, and lamb.

The artists, Mattia Preti (1613 – 1699) was a Baroque artist who worked in Italy and Malta. His early apprenticeship is said to have been with the “Caravaggist” Giovanni Battista Caracciolo, which accounts for his lifelong interest in the style of Caravaggio. Preti was fortunate to enjoy a long career and have a considerable artistic output. He was appointed a Member of the Order of Saint John.

“The Beheading of St John the Baptist” by Pierre Puvis de Chavannes depicts the biblical event of the beheading of Saint John. Herod Antipas ordered the beheading through the vengeful request of his step-daughter Salome and her mother, Herodias. This haunting scene is composed as if on a stage. Pierre Puvis de Chavannes has composed the figures in careful isolation, giving them their own private world.

Saint John is contemplating the cross in his final seconds, his thoughts on the salvation to come. The executioner is shown as if his sword-sweep is a dance of precision and concentration. Salome and Herod look on as witnesses. Herod is shown with his thumb up to symbolize the order for execution. It is a scene of high drama with one woman in the background weeping but also a moment that is frozen in time.

According to the biblical story, Herod, the ruler of Galilee, promised his step-daughter Salome anything she desired if she danced for him, she asked for the head of John the Baptist. The story of the beheading has been depicted many times in art with the mixed symbols of religion, violence, and eroticism.

Pierre Puvis de Chavannes (1824 – 1898) was a French painter best known for his mural painting. He became the co-founder and president of the Société Nationale des Beaux-Arts, and his work influenced many other artists. Émile Zola described his work as:

“an art made of reason, passion, and will.”

Puvis de Chavannes painted two versions of this scene. This painting at the National Gallery, London, is the second version.  The artist worked on this canvas over many years but left unfinished at his death.

Beheading of John the Baptist

According to the Gospels, Herod, who was a sub-king of Galilee under the Roman Empire. He had imprisoned John the Baptist because he reproved Herod for divorcing his wife and unlawfully taking Herodias, the wife of his brother Herod Philip I. On Herod’s birthday, Herodias’ daughter, Salome danced before the king and his guests. Her dancing pleased Herod so much that in his drunkenness, he promised to give her anything she desired, up to half of his kingdom. When Salome asked her mother what she should request, she was told to ask for the head of John the Baptist on a platter. Herod was appalled by the request, he reluctantly agreed.

Scenes from the events around the death of John were a prevalent subject in the treatment of John the Baptist in art. Depictions of the Beheading of St John were initially most often in small predella scenes, but later the subject became famous as more significant independent artworks.

“John the Baptist in the Desert” by Cristofano Allori depicts Saint John as an ascetic with long hair, wearing clothes of camel hair. The young John is holding his begging dish as he looks to God.

The Gospel of Mark introduces John as a fulfillment of a prophecy from the Book of Isaiah. The prophecy stated that a messenger would be sent ahead, with:

“a voice is crying out in the wilderness.”

John is described as wearing clothes of camel’s hair, living on locusts and wild honey. John proclaims the baptism of repentance for the forgiveness of sin and says another will come after him who will not baptize with water, but with the Holy Spirit.

Cristofano Allori (1577 – 1621) was an Italian portrait painter who sought to unite the vibrant coloring of the Venetians with the Florentine attention to drawing. His technical skill is shown by the fact that several copies he made of Correggio’s works were thought to be duplicates by Correggio himself. His extreme fastidiousness limited the number of his artworks.

“Saint John the Baptist” by Jacopo del Casentino and workshop depicts John the Baptist is in the tradition of portrait-style byzantine icons. It is not simply artworks, but an icon is a sacred image used in religious devotion. The most common subjects include Christ, Mary, saints, and angels.

The word icon comes from the Greek word for “image” or “resemblance.” Icons are religious work of art, most commonly a painting, in the cultures of the Eastern Orthodox Church, Oriental Orthodoxy, the Roman Catholic, and particular Eastern Catholic churches.

Early Italian painters copied the Byzantine icon style, including the gold leaf background of this painting, but soon started to innovate their own style. Until the 13th century, “icon”-like portraits followed East pattern. From the 13th century, the western tradition came slowly to allow the artist a more realist approach to the figures.

Only in the 15th century did the production of painted works of art begin to approach Eastern levels, supplemented by mass-produced imports from the Cretan School. In this century, the use of “icon”-like portraits in the West was enormously increased by the introduction of old master prints on paper, mostly woodcuts which were produced in vast numbers.

The artist, Jacopo del Casentino (c. 1297 – 1358) was an Italian painter, active mainly in Tuscany in the first half of the 14th century.

“Saint John the Baptist” by Titian was painted for the now-demolished church of Santa Maria Maggiore. The overpowering but theatrical pose of a muscular athlete is in contrast to the tradition of a hermit emaciated by exhausting fast. Titian’s passion for color dominates the academic quality of this composition. During his long life, Titian’s artistic manner changed drastically, but he retained a lifelong interest in color.

The artists, Tiziano Vecelli, known in English as Titian was a painter during the Renaissance. He is considered the most important member of the 16th-century Venetian school. Titian was one of the most versatile of Italian painters, adept with portraits, landscape backgrounds, and mythological and religious subjects. His painting methods, particularly in the application and use of color, exercised a profound influence on future generations of Western art.

John the Baptist (late 1st century BC – 28–36 AD) was an itinerant Jewish preacher in the early 1st century AD. John the Baptist is revered as a religious figure in Christianity, Islam, the Bahá’í Faith, and Mandaeism. He is called a prophet by these faiths and is honored as a saint in many Christian traditions.

John anticipated a messianic figure greater than himself, and the Gospels portray John as the precursor of Jesus. According to the New Testament, John the Baptist and Jesus of Nazareth were relatives.

John used baptism as the central symbol of his pre-messianic movement. John baptized Jesus, and some of Jesus’ early followers had previously been followers of John.

According to the New Testament, John was sentenced to death and subsequently beheaded by Herod Antipas sometime between 28 and 36 AD after John rebuked him for divorcing his wife and then unlawfully wedding the wife of his brother.

Saint John the Baptist: From Birth to Beheading

Preaching | Saint John the Baptist: From Birth to Beheading

“Anyone with two tunics should share with him who has none.”
– John the Baptist