The Painter in their Studio

The Painter or Artist in their Studio is a popular subject in art.

“Painter in his Studio” by Gerrit Dou depicts either Rembrandt, who was Dou’s teacher, or it is a self-portrait.

The artist is presented as a learned and well-educated painter who has surrounded himself with attributes of the science and arts.

Gerrit Dou was the founder and head of the group of “Leiden Fine Painters.” The Fijnschilders (literally “fine-painters”), were Dutch Golden Age painters, from about 1630 to 1710.

They strove to create a natural reproduction of reality in their meticulously enamel-like small-scale works.

Gerrit Dou (1613 – 1675), also known as Gerard and Douw or Dow, was a Dutch Golden Age painter, whose paintings were small but highly polished.

He specialized in genre scenes and is noted for his uses realistic imagery to create the optical illusions in paintings and candlelit night-scenes with strong chiaroscuro. He was a student of Rembrandt.

Painter in his Studio 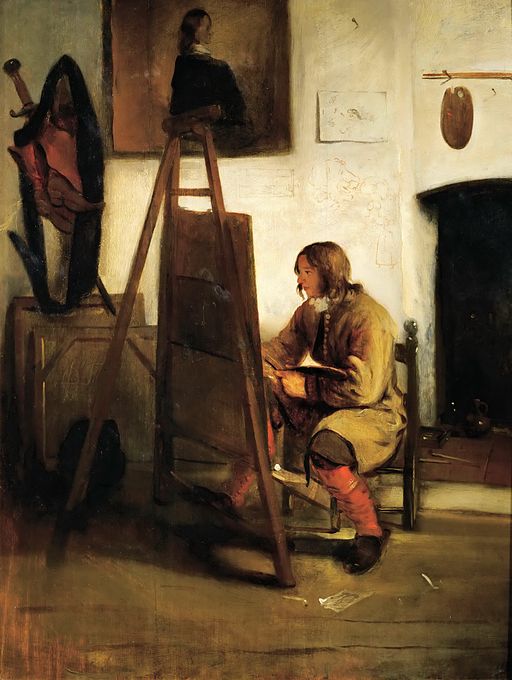 “Young Painter in his Studio” by Barent Fabritius depicts the artist’s brother Johannes Fabritius (1636 – 1707), the youngest of three Fabritius’s brothers.

It is a pictorial and free evocation of a painter at work. His style was influenced by his eldest brother Carel Fabritius (1622 – 1654), who was a pupil of Rembrandt and worked in his studio in Amsterdam.

Barent or Bernard Pietersz Fabritius (1624 –  1673), was a Dutch painter. He studied with his brothers Johannes and Carel Fabritius, and probably with Rembrandt as well.

He was a painter of biblical subjects, mythical and historical scenes, in addition to expressive portraits.

“Painter in his Studio” by François Boucher is a self-portrait of the young artist. Born in Paris, Boucher was the son of a lesser-known painter, who gave him his first artistic training.

At the age of seventeen, Boucher won the elite Grand Prix de Rome for painting but did not take up the opportunity to study in Italy until five years later, due to financial problems at the Académie.

On his return from studying in Italy, he was admitted to the refounded Académie in 1731.

His name, along with that of his patron Madame de Pompadour, had become synonymous with the French Rococo style:

“Boucher is one of those men who represent the taste of a century, who express, personify and embody it.”

François Boucher (1703 – 1770) was a French painter and etcher who worked in the Rococo style. Boucher is known for his idyllic and voluptuous paintings on classical themes, decorative allegories, and pastoral scenes.

He was the most celebrated painter and decorative artist of the 18th century.

“The Artist in his Studio” by Rembrandt depicts the artist’s workshop, at the moment of confrontation between the artist and his canvas.

The easel assumes monumental dimensions, casting a shadow on the door. The canvas depicted in the painting is significantly larger than the actual canvas of this painting.

The artist wearing a wide-brimmed hat and smock and the canvas are the subject in the picture. The large panel on the easel has its back evocatively turned towards the viewer.

The theme of the artist in his studio was a popular one in seventeenth-century Dutch art. In contrast to most Dutch artists, Rembrandt depicts a bare room with the plaster cracked and peeling from its walls.

Rembrandt Harmenszoon van Rijn (1606 – 1669) was a Dutch painter and printmaker. He was an innovative and prolific master and one of the greatest visual artists in the history of art and the most important in Dutch art history.

Rembrandt’s works depict a wide range of style and subject matter, from portraits to landscapes, genre scenes, allegorical and historical scenes, and biblical and mythological themes.

His contributions came in a period of great wealth and cultural achievement that historians call the Dutch Golden Age. It was a time when Dutch art was extraordinarily prolific and innovative and gave rise to important new genres. 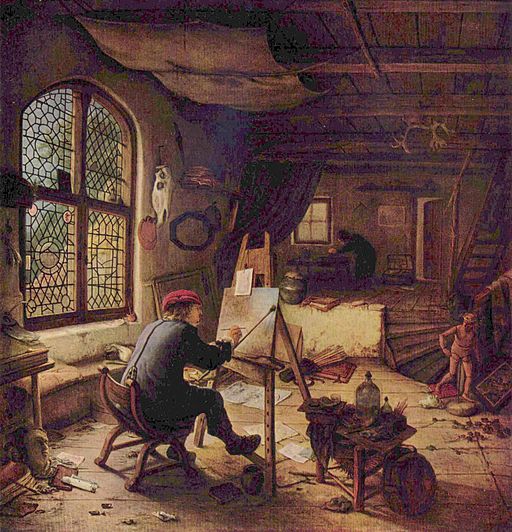 “The Painter in his Studio” by Adriaen van Ostade depicts a painter sitting with his back to the viewer, in a dilapidated studio. The painter seated in a low chair while working at an easel, supporting his brush-holding hand with a maulstick.

In the background, a young apprentice is assisting him by grinding and mixing colors on the table at the far wall.

The studio is full of references to his education and intellectual interests, including prints, a plaster cast, a wooden model, props, animal skulls, and books.

A mahlstick, or maulstick, is a stick with a padded head used by painters to support the hand holding the paintbrush. The word derives from the German and Dutch Malstock or maalstok ‘painter’s stick,’ from malen ‘to paint.’

In 16th- through 19th-century paintings of artists, including self-portraits, the maulstick is often depicted as part of the painter’s equipment.

He and his brother were pupils of Frans Hals and, like him, spent most of their lives in Haarlem.

“Self-Portrait” by Catharina van Hemessen depicts the artist when she was 20 years old. It is considered the first self-portrait of any artist depicted working at an easel.

Her father, Jan Sanders van Hemessen was a painter in Antwerp and her teacher. This portrait, created in 1548, shows the artist in the early stages of painting a portrait.

She was a successful painter, and her paintings can be found at the Rijksmuseum in Amsterdam, the National Gallery, London, and the Kunstmuseum Basel.

Her paintings have a quiet dignity to them and tend to be small with plain dark backgrounds that provide no sense of location or space.

Catharina van Hemessen (1528 – 1587) was a Flemish Renaissance painter. She is the earliest female Flemish painter for whom there are verifiable surviving artworks.

She is known for a series of small scale female portraits completed between the late 1540s and early 1550s and a few religious compositions.

The Artist in their Studio

To be added at a later date: