“The Fall of Icarus” in Art and Paintings

Many famous painters have captured the story of “The Fall of Icarus” in Art:

“The Fall of Icarus” by Jacob Peter Gowy

“The Fall of Icarus” by Jacob Peter Gowy depicts the moment when the wax in Icarus’s wings melted, and he tumbled out of the sky and fell into the sea where he drowned.

In Greek mythology, Icarus and his father were attempting to escape their prison, employing wings that his father constructed from feathers and wax. Icarus’ father, however, did warn him not to fly too low nor too high.

He warned him not to fly low as the sea’s dampness would clog his wings. And not too high as the sun’s heat would melt the wax in his wings.

Icarus ignored his father’s instructions and flew too high, and the wax in his wings melted. Icarus’s father, Daedalus, looks on unable to help his son as he falls past him.

His son’s calamity left Daedalus heartbroken, but instead of giving up, he flew to the island of Sicily.

Jacob Peter Gowy (1610 – before 1664) was a Flemish Baroque painter of history paintings and portraits. He collaborated with Peter Paul Rubens and spent time in England, where he was active as a portrait painter.

“The Fall of Icarus” by Jacob Peter Gowy 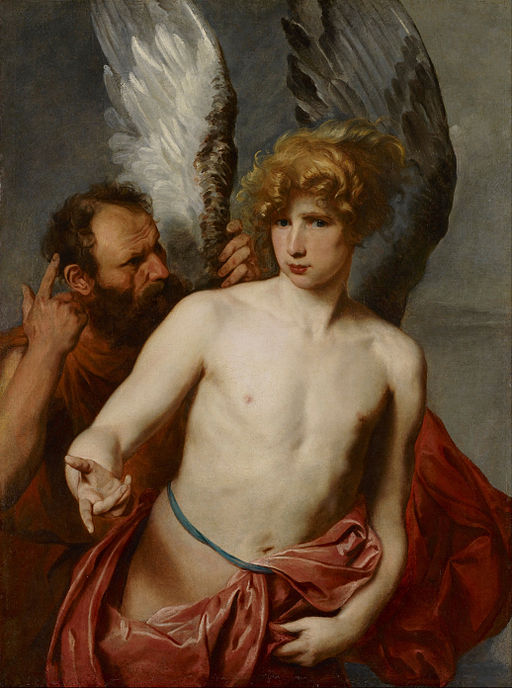 “Daedalus and Icarus” by Anthony van Dyck shows Icarus’s father warning his son Icarus first of complacency and then of hubris as he points to his head.

Icarus is trying to impress on his youthful son not to be complacent and fly too low as the sea’s dampness would not clog his wings. He also warns Icarus of the hubris of flying too high to the sun where the heat will melt the wax in his wings.

Icarus drowned in the area which today bears his name, the Icarian Sea near Icaria, an island southwest of Samos, Greece

Anthony van Dyck (1599 – 1641) was a Flemish Baroque artist who became the leading court painter in England after his success in the Southern Netherlands and Italy.

He is best known for his portraits of European aristocracy, most notably Charles I and his family and associates. 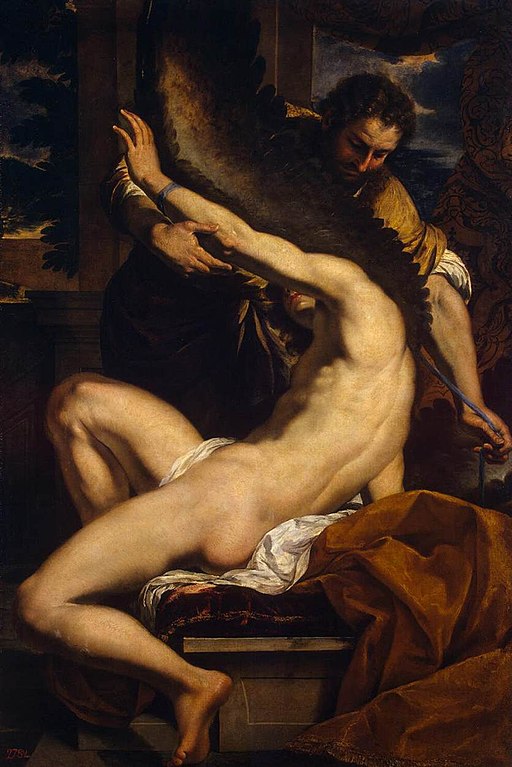 “Daedalus and Icarus” by Charles Le Brun depicts the fabled inventor Daedalus, who made wings for himself and his son to escape from their prison tower.

The figures are skillfully shown in complex foreshortening, creating a dynamic composition through the use of contrasts in light and shade.

The cold greenish-blue of the ominous sky and the warm golden-brown draperies contrast with the pale body of Icarus.

In Greek mythology, Daedalus was a skillful architect and craftsman full of wisdom and knowledge. He invented and built the Labyrinth for King Minos of Crete.

However, after finishing the Labyrinth, the King had Daedalus imprisoned to preserve the secrets of the Labrinth. Daedalus and his son Icarus devised a plan to escape by using wings made of wax that Daedalus had invented.

As a court painter to Louis XIV, who declared him “the greatest French artist of all time,” he was a dominant figure in 17th-century French art. Le Brun created in this painting a dramatic image using realism and powerful modeling. 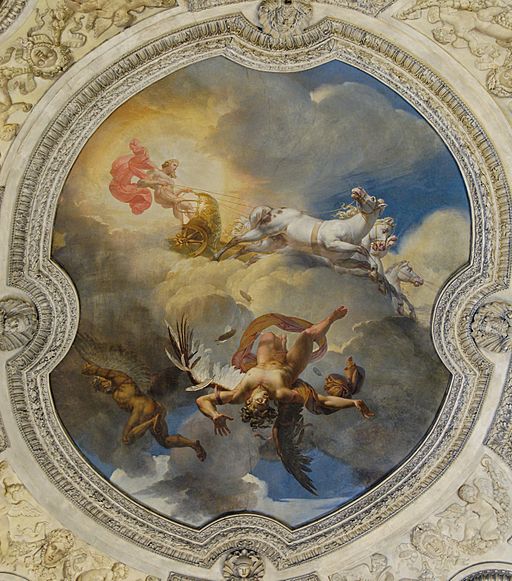 “The Fall of Icarus” by Merry-Joseph Blondel is an oil painting on the ceiling of the Rotunda of Apollo, in the Louvre museum, in Paris. Blondel depicts Icarus falling after his wings melted when he flew too close to the Sun god Helios.

Helios in ancient Greek myth was the god and personification of the Sun, depicted with a radiant crown and driving a horse-drawn chariot through the sky.

Icarus’s father is shown in distress as he hopeless watches his son fall to his death after he ignored his father’s advice not to fly too close to Helios.

Merry-Joseph Blondel (1781 – 1853) was a French history painter of the Neoclassical school. He was a winner of the prestigious Prix de Rome in 1803.

He was bestowed with the rank of Knight in the order of the Legion d’Honneur by Charles X of France and was elected to a seat at the Académie des Beaux-Arts in Paris. 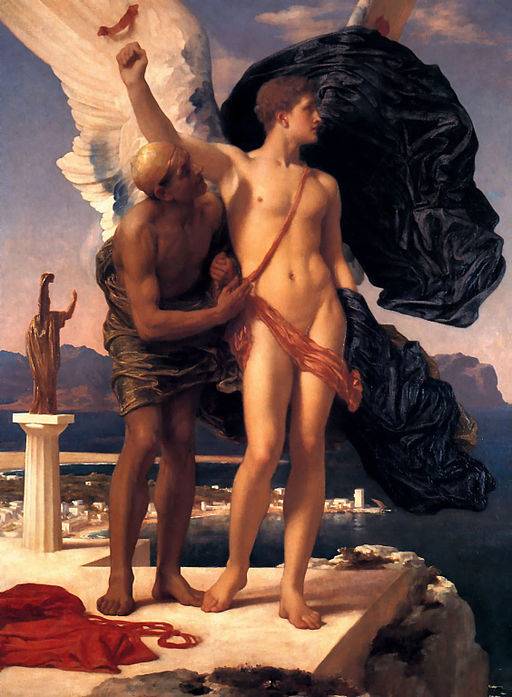 “Icarus and Daedalus” by Frederic Leighton depicts Icarus being prepared for flight by his father, Daedalus. Icarus is almost nude, save for some billowing drapery is standing on a marble ledge. Icarus is reaching up to grasp the handle to the wings fastened on his back. However, he seems to be ignoring his father’s warning.

Leighton has captured the moments before Icarus’s hubris leads to his downfall. This overconfidence is symbolized by his single-minded gaze towards the horizon and his grasping at air rather than his hand-strap.

Lord Leighton was successful during his lifetime because his paintings brilliantly captured the Victorian nostalgia and longing for the glorious “Golden Age” of ancient Greece and Rome.

In classically inspired oil paintings, Leighton depicted an idealized vision of the past that perfectly appealed to the sensibilities of the time.

“Daedalus and Icarus” by Orazio Riminaldi depicts the wrinkled face and tan, muscular right arm of the farther as he assists his young son with their only hope for freedom.

The young Icarus has curly hair, a smooth pale complexion, and the body of a boy.

His brightly lit thigh and arm are in sharp contrast to the dark background creating an atmosphere that heightens the viewer’s empathy for the inevitable destiny of this youth.

Orazio Riminaldi (1593 – 1630) was an Italian painter who painted mainly history subjects in a Caravaggist style. 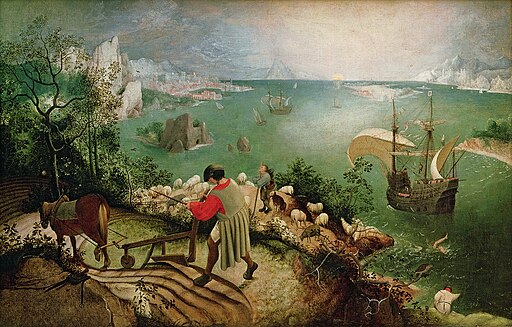 “Landscape with the Fall of Icarus” by Pieter Brueghel the Elder is an excellent copy by an unknown artist of Bruegel’s lost original. The plowman, shepherd, and angler in the painting are mentioned in famous Ovid’s account of the legend, in which they are:

“astonished and think to see gods approaching them through the aether.”

The painting contains these figures, but they seem to be oblivious to Icarus’s fate. This composition may be intended to illustrate the Flemish proverb: “And the farmer continued to plow…”

The painting is highlighting humanity’s indifference to other people’s suffering.

Pieter Bruegel (also Brueghel) the Elder (1525 – 1569) was the most significant artist of Dutch and Flemish Renaissance painting, a painter known for his landscapes and peasant scenes.

He influenced the Dutch Golden Age painting with his innovative choices of subject matter, as one of the first generation of artists to grow up when religious subjects had ceased to be the dominant subject matter of painting. 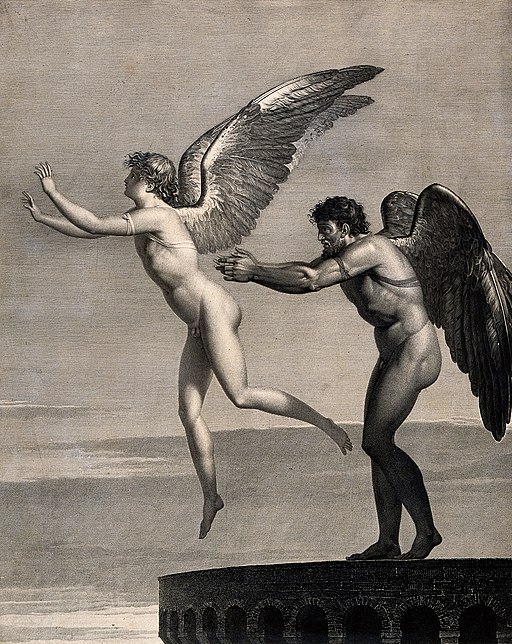 In the Greek myth, Daedalus had created two pairs of wings out of wax and feathers for himself and his son. Daedalus tie Icarus’s wings first, but warned his son not to fly too close to the sun, nor too close to the sea, but to follow his father’s flight path.

Overcome by the giddiness of flying, Icarus soared into the sky. Icarus came too close to the sun, which due to the heat, melted the wax.

Icarus kept flapping his wings but soon realized that he had no feathers left and that he was only flapping his bare arms, and so Icarus fell.

Auguste Gaspard Louis, Baron Boucher-Desnoyers (1779 in Paris – 857) was one of the most eminent of modern French engravers.