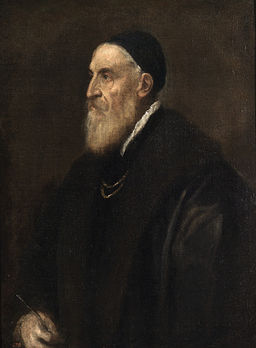 A Virtual Tour of Titian

“Bacchus and Ariadne” by Titian depict Bacchus, the god of wine, emerging with his followers from the right of the scene and according to myth, falling in love at first sight with Ariadne.

Titian shows Bacchus leaping from his chariot to protect Ariadne. She had been abandoned on a Greek island and deserted by her lover Theseus, whose ship sails away to the far left of the picture.

The first commission for this painting was given to Raphael, who unfortunately died young in 1520, and Titian was given the opportunity to paint this mythological subject during 1522 for a wealthy patron. Museum: National Gallery, London

The Rape of Europa

The “Rape of Europa” by Titian is a mythological painting of the story of the abduction of Europa by Zeus, painted about 1560 – 62.

In Greek mythology, Europa was the mother of King Minos of Crete, a woman with Phoenician origins, after whom the continent of Europe was named.

The painting depicts the story of her abduction by Zeus, who is in the form of a white bull.

This myth was originally a Cretan story, and many of the love-stories concerning Zeus originated from even more ancient myths describing his marriages with goddesses. Museum: Isabella Stewart Gardner Museum, Boston

Perseus is portrayed as attacking the sea monster, who turns to attack the hero, while Andromeda’s white body is contrasted against the dark undercliff and portrayed as pure innocence. Museum:  Wallace Collection

“Diana and Actaeon” by Titian depicts the moment of surprise when the young hunter named Actaeon, unwittingly stumbles on the naked goddess Diana.

She was enjoying a bath by a spring with help from her escort of nymphs. The nymphs scream in surprise and attempt to cover Diana, who, in a fit of fury, splashes water upon Actaeon.

As a mortal man, he is transformed into a deer with antlers and promptly flees in fear. Museum: The National Gallery, London

The Death of Actaeon

“The Death of Actaeon” by Titian depicts the last stage of the mythological story in which the young hunter named Actaeon.

He had unwittingly stumbled on the naked goddess Diana who is enjoying a bath in the spring. Diana is surprised to be caught during her bath in an exposed naked state by Actaeon.

In response, she splashes water on Actaeon, who as a mortal is transformed into a deer with antlers and flees in fear.

This painting recounts the unfortunate fate of Actaeon, who after fleeing, is tracked down by his hounds and killed because they failed to recognize their master. Museum: The National Gallery, London

“Venus and Adonis” is a composition that has been painted many times by Titian, his studio assistants, and others.

“Diana and Callisto” by Titian depicts the moment Diana forces Callisto to strip and bathe and discovers her pregnancy.

Callisto was the favorite of Diana, the virgin goddess of the hunt, but Jupiter, king of the gods, noticed her beauty and disguised himself as a woman to seduce her.

Diana banished Callisto, but Callisto was then discovered by Hera, Zeus’s wife, and transformed her into a bear Titian painted Diana and Callisto for his patron, King Philip II of Spain, between 1556 and 1559.

It is one of several pictures, including “Diana and Actaeon” based on the Roman poet Ovid’s Metamorphoses, designed to be displayed together.

The stream runs from one painting to the other, and elements and poses are echoed, creating a rhythm across both canvases.

The gestures and postures of Diana and her nymphs complement those in the composition of “Diana and Actaeon.”

“Saint John the Baptist” by Titian was painted for the now-demolished church of Santa Maria Maggiore. The overpowering but theatrical pose of a muscular athlete is in contrast to the tradition of a hermit emaciated by exhausting fast.

Titian’s passion for color dominates the academic quality of this composition. During his long life, Titian’s artistic manner changed drastically, but he retained a lifelong interest in color.

The artists, Tiziano Vecelli, known in English as Titian was a painter during the Renaissance. He is considered the most important member of the 16th-century Venetian school. Museum: Gallerie dell’Accademia

Allegory of Time Governed by Prudence

“Allegory of Time Governed by Prudence” by Titian portrays three human heads, each facing in a different direction, above three animal heads.

The animal heads are from left to right, a wolf, a lion, and a dog. The painting has been interpreted as operating on several levels.

The painting depicts the different ages of the three human heads, which represent the three ages of man. The ages are, from left to right, old age, maturity, and youth.

The different directions in which they are facing reflect a broader concept of time itself as having a past, present, and future. Museum: National Gallery, London

“The Tribute Money” by Titian depicts the Pharisee, who asks Christ whether it is right to pay tax to the Romans, who rule Palestine. Christ, sensing a trap, asks whose likeness and name are on the coinage: “They say unto him, Caesar’s.”

A Man with a Quilted Sleeve

“A Man with a Quilted Sleeve” by Titian depicts a man turning to look at the viewer over his shoulder and momentarily meets our gaze. The viewer’s attention is drawn to the raised brow above his right eye, centered midway across the picture.

It is one of Titian’s earliest portraits and shows the man’s elbow resting on a parapet with his quilted sleeve projecting over the parapet barrier, creating a sense of projecting his physical presence into ours.

Placing a ledge between the subject and the viewer was a common feature of early Renaissance Italian portraits as a useful way of depicting portraits at less than full-length.

Titian’s innovation was to have the large sleeve project slightly beyond the parapet to subvert the usual barrier and project the subject into the perceived viewer’s space.

With the head slightly atilt and an eyebrow appearing raised, the turning pose, exactly halfway across the composition, adds life and drama. Museum:       The National Gallery, London

This daughter of Herodias is identified as Salome. Herodias, her mother, bore a grudge against John for proclaiming that Herod’s marriage to her was unlawful, so she encouraged her daughter to demand that John be executed. Museum:  Norton Simon Museum

Titian: A collection of 255 paintings

Titian: The father of modern painting

What Makes a Master: Titian

Virtual Tour of Famous Women Artists  You Should Know

“The painter must always seek the essence of things, always represent the essential characteristics and emotions of the person he is painting.”

“He who improvises can never make a perfect line of poetry.”

“Painting done under pressure by artists without the necessary talent can only give rise to formlessness, as painting is a profession that requires peace of mind.”

“From the example of the past, the man of the present acts prudently so as not to imperil the future.”

“Those who are compelled to paint by force, without being in the necessary mood, can produce only ungainly works because this profession requires an unruffled temper.”

“Art is stronger than Nature.”

“It is not bright colors but good drawing that makes figures beautiful.”

“The painter must always seek the essence of things, always represent the essential characteristics and emotions of the person he is painting.”

“I think I am beginning to learn something about painting.”

The Power of Art – Tizian