“The Tribute Money” by Titian

“The Tribute Money” by Titian depicts the Pharisee, who asks Christ whether it is right to pay tax to the Romans, who rule Palestine. Christ, sensing a trap, asks whose likeness and name are on the coinage:

“They say unto him, Caesar’s.”

The painting shows Christ and a Pharisee at the moment in the Gospels when Christ is shown the coin, and he says 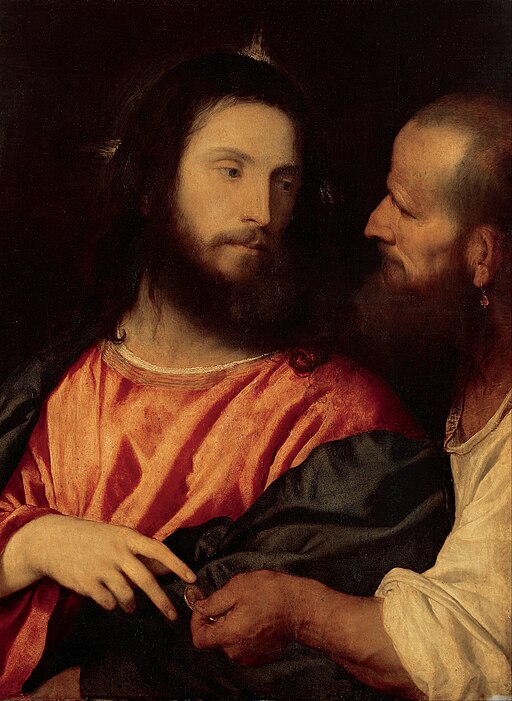 The subject was rare in art, and the first version may have been the first representation in art.  It was commissioned to decorate the door of a cabinet containing the collection of medals and ancient and modern coins of Alfonso I d’Este, Duke of Ferrara.

When the painting was produced for Duke Alfonzo, the theme had personal significance for him as the Papacy had excommunicated him after he had not supported the papacy during a specific war.

The Duke of Ferrara was also opposed to the papacy, which had been aggressively expanding the Papal States and wanted to absorb Ferrara’s Duchy.

For Alfonso, the message in this painting was probably that the Papacy should concentrate its attention on church matters instead of expanding its territory. Duke Alfonzo had included part of the gospel text of the episode on his gold coinage.

The second version of the painting was sent to King Philip II of Spain, and it hung in the Sacristy of Philip’s royal residence and monastery of El Escorial for 200 years.

After Spain, the painting joined the collection of Gemäldegalerie Alte Meister in Dresden, Germany. It was rescued from destruction during Dresden’s bombing in World War II when it was stored, with other works of art, in an underground tunnel.

When the Red Army found the art collection, they took them to Moscow. The painting was badly damaged by water and was painstakingly restored by Russian painter Pavel Korin. Together with many others, in 1955, the painting was returned to Dresden, then in the DDR.

This phrase has become a widely quoted summary of the relationship between Christianity, secular government, and society.

The phrase gives rise to multiple interpretations about the circumstances under which Christians should submit to earthly authority.

The text identifies the coin, and it is thought that the coin was a Roman denarius with the head of Tiberius.

During Jesus’ lifetime, several other coins in circulation may be possible candidates, including:

At his trial before Pontius Pilate, Jesus was accused of promoting resistance to Caesar’s tax.

The artist of this masterpiece, Titian, was the most famous painter of the 16th-century Venetian school.

What Makes a Master: Titian

Tour of the Gemäldegalerie Alte Meister