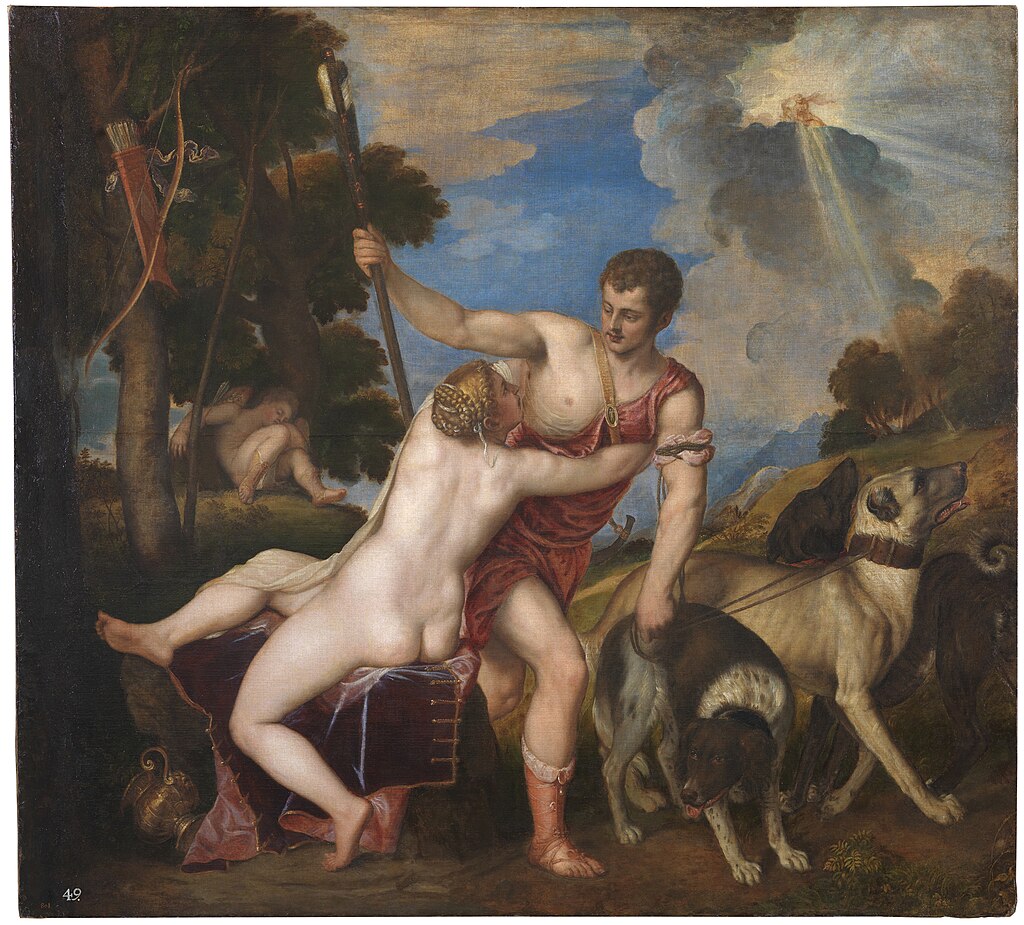 “Venus and Adonis” is a composition that has been painted many times by Titian, his studio assistants, and others. There are some thirty versions that may date from the 16th century.

The Prado version of “Venus and Adonis” is set at dawn and shows the young Adonis pulling himself away from Venus. Under the trees to the left, Cupid lies asleep, with his bow and quiver of arrows hanging from a tree; this is not a time for love. High in the sky, a figure rides a chariot, representing the dawn.

Adonis is accompanied by three hounds with leads that are wound around his arm. He holds a feathered spear, a weapon used in hunting in the 16th century. He has a horn hanging from his belt, and Roman sculptures inspire his dress.

Venus sits naked on a rock covered with her luxurious clothing, which has gold braid edges and buttons. Venus is holding onto Adonis as he tries to set out for the hunt. The nudity of Venus undoubtedly accounting for the popularity of this Titian composition.

This painting is the most famous version of the “Venus and Adonis.” It was delivered in 1553 to Prince Philip, later King Philip II of Spain, and is now in the Museo del Prado, Madrid. It was part of a series of mythological paintings called “poesie” (“poems”). Venus and Adonis were designed to be viewed alongside Danaë by Titian, the first of the “poesie” painting. Danaë by Titian also became a famous composition with a series of at least six versions of the same composition by Titian and his workshop made between about 1544, and the 1560s. 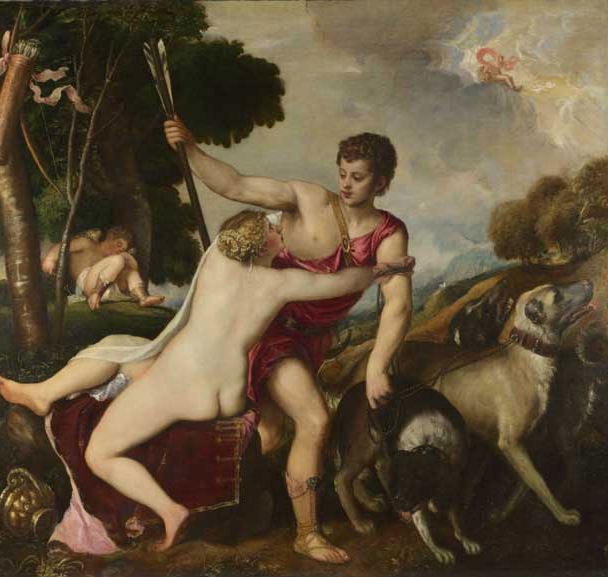 The National Gallery, London version of “Venus and Adonis,” is attributed to the Workshop of Titian. The naked goddess of love, Venus throws her arms around handsome young Adonis to stop him from going out to hunt.

The Roman poet Ovid was the primary source of the story we know today from Book 10 of Ovid’s Metamorphoses.  Adonis is a beautiful youth, a royal orphan, who spends his time hunting. Venus falls in love with him after one of Cupid’s arrows hits her by mistake. They hunt together, but she avoids the fiercer animals and warns him about them. One day Adonis hunts alone and is gored by a wounded wild boar. Venus, in the sky in her chariot, hears his cries but cannot save him. In Ovid, it is Venus who leaves first, and Adonis pulling himself away is Titian’s invention.

This picture is one of many versions of the subject painted by Titian and his studio. This version was probably painted by artists in Titian’s workshop over a brush drawing by Titian himself.

National Gallery, London version has slight differences from other versions that include the following: 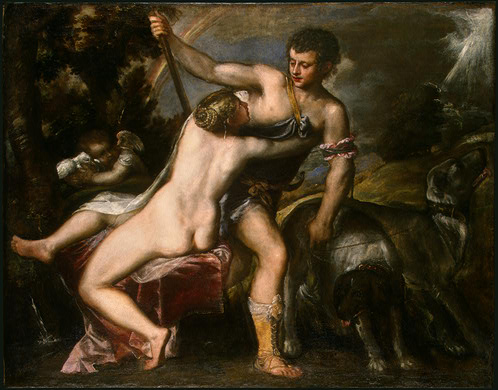 “Venus and Adonis” by Titian was one of the most successful compositions of Titian’s later career. Many versions are known to have been painted by Titian and his workshop. Additionally, there are versions made independently by assistants and copyists within the painter’s lifetime and afterward.

This version of “Venus and Adonis” dates from the 1560s based on stylistic factors. A technical examination of the underlying paint layers has revealed changes to the composition that suggest the painting may have been begun as early.

Venus is if filled with foreboding about Adonis’s fate and desperately clings to her lover, while he pulls himself free of her embrace. Venus’s gesture is echoed by that of Cupid, who anxiously watches the lovers while clutching a dove, which is sacred to Venus. Although Ovid did not describe this scene in his writings, Titian’s creation introduced a new powerful element of dramatic tension into the ancient story.

National Gallery, Washington DC version is unique among the versions with a small spring to the left of Venus’s legs. The Spencer family inherited it in 1685. It was then sold in 1924 to various British and American art dealers and acquired in 1942 by the National Gallery of Art.

This version of “Venus and Adonis” by Titian is part of the  Metropolitan Museum of Art, NY Collection. From the many versions of Titian’s original masterpiece, there are two basic types of composition the “Prado” and “Farnese” types. The Prado type is the most common with three-dogs. The Farnese type has two-dogs and has a tighter crop on the subject and a wider shape, without most of the sky.

The MET version is a Farnese type and shows Adonis’ raised hand is just below the picture edge, so the feathers on the spear are not seen, nor is the chariot in the sky. There is no gold vessel on the ground, and Cupid is closer to the couple, awake, holding a dove in his hands.

The Metropolitan Museum of Art version is a Farnese type painted towards the end of Titian’s career and is at least partly by Titian. It was formerly in the collection of the Earls of Darnley.

“Venus and Adonis” by Titian depicts Venus trying to restrain her lover Adonis from going off to the hunt.  His dogs strain at their leashes, echoing his impatience, as detailed in Ovid’s Metamorphoses. Cupid sleeps in the background, a symbol of Adonis’s resistance to Venus’s embrace. The story relates how one morning when Venus departs in her sky-borne chariot, Adonis’s hounds rouse a wild boar, which turns on him. Venus hears Adonis’s groans, leaps from her chariot, and finds him dying. From her lover’s blood, she creates a fragile flower whose petals are scattered in the wind, named anemone’ windflower’ in Greek.

Titian’s composition suggests spontaneity and movement. In some areas, as in Adonis’s arm, the artist even painted with his finger. The dynamism is driven from the torsion in Venus’ pose, which was inspired by an ancient sculptural relief. Titian used vibrant colors, shimmering highlights, to create an evocative and poignant picture.

The version in the Getty Museum is attributed to Titian, though others do not agree. The painting’s provenance begins in an inventory of 1648 in Genoa. Later it was bought by a consortium in London after the French Revolution and passed in the collection of successive British aristocrats and relatives. The Getty Museum acquired the painting in 1992.

One day, Adonis was gored by a wild boar during a hunting trip and died in Aphrodite’s arms as she wept. His blood mingled with her tears and became the anemone flower. Aphrodite declared the Adonia festival to commemorate his tragic death, which was celebrated by women every year in midsummer.

Adonis’s name is often applied in modern times to handsome youths, of whom he is the archetype.

Aphrodite was an ancient Greek goddess associated with love, beauty, pleasure, passion, and procreation. She was syncretized with the Roman goddess Venus. Aphrodite has been featured in Western art as a symbol of female beauty and has appeared in numerous works of Western literature.

Venus was a Roman goddess, whose functions encompassed love, beauty, desire, sex, fertility, prosperity, and victory. In Roman mythology, she was the ancestor of the Roman people through her son, Aeneas, who survived the fall of Troy and fled to Italy. Julius Caesar claimed her as his ancestor. Venus was central to many religious festivals and was revered in Roman religion under numerous cult titles.

The Romans adapted the myths and iconography of her Greek counterpart Aphrodite for Roman art and Latin literature. In the later classical tradition of the West, Venus became one of the most widely referenced deities of Greco-Roman mythology as the embodiment of love and sexuality.

The artist of this masterpiece, Titian, was the most famous painter of the 16th-century Venetian school. So much so that his contemporaries recognized him as one of the most accomplished painters, adept with portraits, landscape, and mythological and religious subjects. His application and use of color, his vivid, luminous tints, his brushwork, and subtlety of tone had a profound influence on Western art.