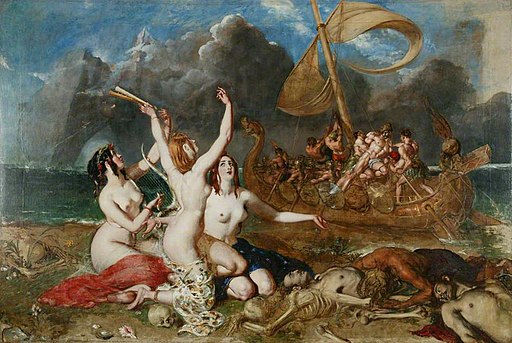 “The Sirens and Ulysses” by William Etty

“The Sirens and Ulysses” by William Etty depicts a scene from Homer’s Odyssey. It shows Ulysses becoming bewitched by the song of the Sirens.

Ulysses was warned about the Sirens; however, he wanted to hear the song. So he ordered his ship’s crew to tie him up and to block their ears to prevent themselves from hearing the song and becoming bewitched.

Etty portrayed the Sirens as naked young women on an island strewn with decaying corpses.

Etty made every effort to ensure realism in the picture. He even visited mortuaries to sketch corpses in varying stages of decay to make sure the accuracy of the bodies on the beach.

This painting by Etty is considered among his most significant works, and his most massive in size, measuring 442.5 cm by 297 cm (14 ft 6 in by 9 ft 9 in). Etty wrote that it illustrated:

“The importance of resisting sensual delights.”

The painting, with its juxtaposition of male and female nudity and decaying corpses, immediately divided opinion. Some critics considered it one of the finest artworks, while others thought it:

“a disgusting combination of voluptuousness and loathsome putridity… in the worst possible taste”.

“The Sirens and Ulysses” was painted using an experimental technique, which caused it to begin to deteriorate as soon as it was completed. It was quickly considered in too poor a condition for continued public display and was placed in the gallery’s archives.

Restoration began on the work in 2003, and in 2010 the painting went on show after over 150 years after being consigned to storage.

William Etty was best known for his history paintings containing nude figures. He was the first significant British painter of nudes and still life. Etty earned respect at the Royal Academy of Arts for his ability to paint realistic flesh tones.

As a timid man, Etty rarely socialized and never married, and while he was Methodist, he was also deeply attached to the Roman Catholic Church.

Ulysses and the Sirens in Art

The Sirens and Ulysses

Ulysses is the legendary Greek king of Ithaca and the hero of Homer’s epic poem the Odyssey. Ulysses also plays a key role in Homer’s Iliad. In the Odyssey, Ulysses has to endure ten years of adventures before he can return home to Ithaca after the Trojan War. On the way home from Troy, one of the significant incidences is his encounter with the Sirens.