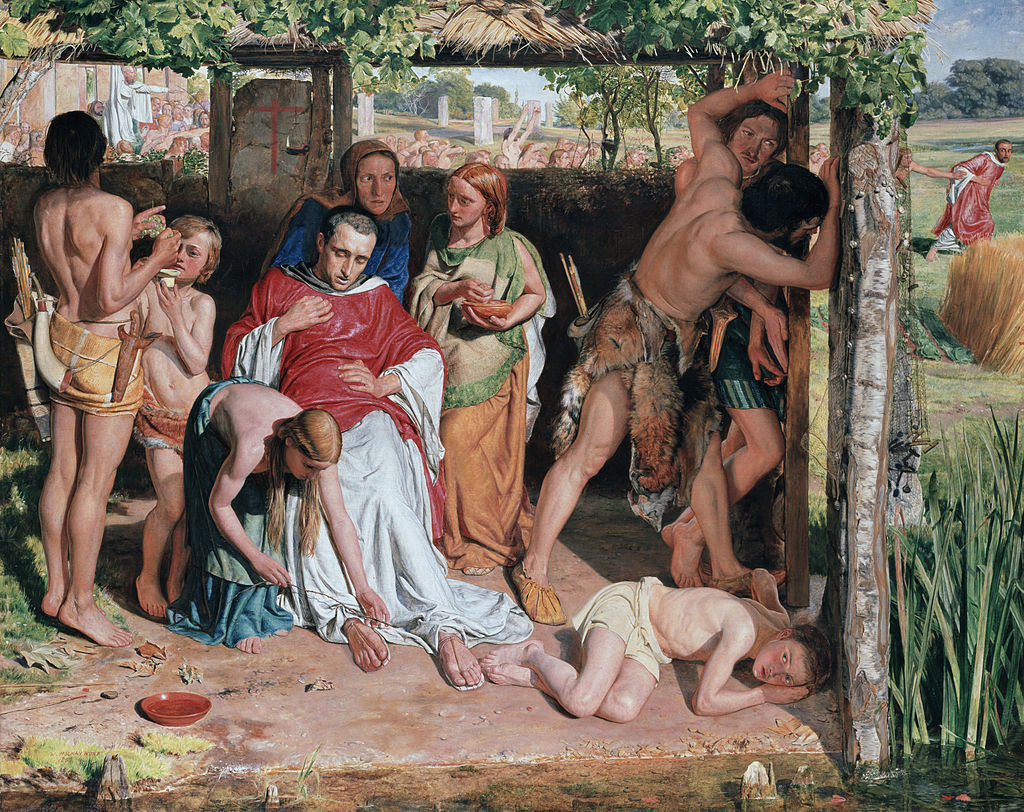 “The Persecution of the Druids” by William Holman Hunt

However, the vestment-like clothes that they wear belong to a much later period of history.

The composition is full of symbolic allusions. The man with the black beard and fur loincloth recalls John the Baptist, and the youth squeezing grapes evokes the Eucharist.

The scene includes many details such as the young boy on the bottom right listening for any approaching footsteps and the weapons carried by male family members.

In the stories of the early lives of saints and martyrs, the druids are represented as magicians and diviners. They are described in the myths and stories as resisting and preventing the progress of Christianity.

This painting by William Holman Hunt was exhibited in 1850 and was a companion artwork to John Everett Millais’s Christ in the House of His Parents.

This painting was less controversial than Millais’s companion piece, but Hunt was still heavily criticized for the odd composition and the figures’ contorted poses.

Hunt himself continued to believe this painting to be one of his best works. In 1872, referring to the painting as “the Early Xtians,” William Holman Hunt wrote in a letter:

“Sometimes when I look at the Early Xtians,
I feel rather ashamed that I have got no further than later years have brought me,
but the truth is that at twenty
– health, enthusiasm, and yet unpunished confidence in oneself
carries a man very near his ultimate length of the tether.”

While the druids are reported to have been literate, they did not record their knowledge in written form. Thus they left no written accounts of themselves. However, their contemporaries are reported in some detail from other cultures, such as the Romans and Greeks.

The druid orders were suppressed by the Roman government under the 1st century CE emperors and had disappeared from the written record by the 2nd century.

The druids appear in some medieval tales from Christianized Ireland, where they are primarily portrayed as sorcerers who opposed the coming of Christianity.

The druids played an essential part in pagan Celtic society. In his description, Julius Caesar claimed that they were among the two most important social groups in the culture.

They were responsible for organizing sacrifices, divination, and judicial procedure in Gaulish, British, and Irish societies.

Caesar claimed that they were exempt from military service and the payment of taxes and had the power to excommunicate people from religious festivals.

The role of druids in Gallic society was held in such respect that they could stop the battle if they intervened between two armies.

In the wake of the Celtic revival during the 18th and 19th centuries, fraternal and neopagan groups were founded based on ideas about the ancient druids, a Neo-Druidism movement.

Many popular notions about druids are based on 18th-century scholars’ misconceptions, which have been superseded by more recent studies.

The Roman conquest of Britain was a gradual process, beginning in AD 43 under Emperor Claudius and being largely completed by 87.

The Romans first forced their way inland in several battles against British tribes. Following a general uprising in AD 60 in which the Britons sacked Londinium, the Romans suppressed the rebellion. The Romans eventually went on to push as far north as central Caledonia.

Even after Hadrian’s Wall was established as the border, tribes in Scotland and northern England repeatedly rebelled against Roman rule. Forts continued to be maintained across northern Britain to protect against these attacks.

The early history of Christianity in Britain is highly obscure. Medieval legends concerning the conversion of the island have been discredited.

The first archaeological evidence and records that show a Christian community large enough to maintain churches and bishops dates to the 3rd and 4th centuries.

These more formal organizational structures arose from materially modest beginnings. The British delegation to the 353 Council of Rimini had to beg for financial assistance from its fellows to return home.

The Romano-British population seems to have been mostly Christian by the Sub-Roman period. However, Britain’s Saxon invasions destroyed most of the formal church structures in the east of Britain as they progressed, replacing it with a form of Germanic polytheism.

Christianity, which was extinguished with the arrival of the Saxons in the east, was reintroduced again to eastern Britain by Gregorian Mission in about 600.

The Druids: What Do We Really Know?

“The past is not dead; it is living in us and will be alive in the future, which we are now helping to make.”
– William Morris

The Pre-Raphaelites in Oxford: Ashmolean Museum – Paintings and Sculpture

The Druids Name and Places of Worship

“This is the forest primeval. The murmuring pines and the hemlocks, Bearded with moss, and in garments green, indistinct in the twilight, Stand like Druids of eld, with voices sad and prophetic.”
– Henry Wadsworth Longfellow