“The Lady of Shalott” by William Holman Hunt

“She knows not what the curse may be,
And so she weaveth steadily,
And little other care hath she,
The Lady of Shalott.”

“All in the blue unclouded weather
Thick-jewell’d shone the saddle-leather,
The helmet and the helmet-feather
Burn’d like one burning flame together,
As he rode down to Camelot.”

The Lady of Shalott is shown standing within her circular loom, with an unfinished tapestry. However, the weaving is trapping her in its threads.

She is wearing a brightly colored bodice over a cream chemise, with a pink skirt. Her feet are bare, with her slip-on pattens nearby, and her long hair has whipped up wildly above her head.

Behind her is the large round mirror that she had used to observe the world outside her tower, but it has cracked. The reflection shows Launcelot riding past and the pillars of the Lady’s window.

“Out flew the web and floated wide—
The mirror crack’d from side to side;
“The curse is come upon me,” cried
The Lady of Shalott.”

The irises littering the floor indicate that her purity is stained. Disturbed from their perch, a pair of doves fly past silver candlestick, while another pair escapes through an upper window.

To her left is an oval roundel of the adoration of the Christ Child by Mary, representing humility. The roundel on her right shows a haloed Hercules representing valor during his labor to take apples from the Hesperides’ garden.

Above the roundels is a frieze of a stylized sky, containing cherubs and haloed female figures guiding planets and a sphere of stars. One of the angelic beings stomps on a serpent. The frieze symbolizes harmony and patience.

After the scene in the painting, she leaves her tower, finds a boat, and floats down the river to Camelot. She dies before arriving at the palace. Among the knights and ladies who see her is Lancelot, who thinks she is lovely.

“Who is this? And what is here?”
And in the lighted palace near
Died the sound of royal cheer;
And they crossed themselves for fear,
All the Knights at Camelot;
But Lancelot mused a little space
He said, “She has a lovely face;
God in his mercy lend her grace,
The Lady of Shalott.”

Hunt’s creative effort took many years before he finishes this painting and the work underwent multiple transformations before this painting was finalized.

The painting is based on Hunt’s 1857 drawing engraved on wood by John Thompson and printed in the lavishly illustrated 10th edition of Tennyson’s Poems, published in 1857.

Hunt’s drawing and painting were based on earlier sketches from the early 1850s inspired by Jan van Eyck’s marriage portrait, The Arnolfini Portrait.

Then came a small panel painting now at the Manchester Art Gallery. His grand final version was completed between 1902 and 1905.

“The Lady of Shalott” by Alfred Tennyson is based on the medieval story that tells the tragic story of a young noblewoman imprisoned in a tower up the river from Camelot.

Tennyson wrote two versions of the poem, one published in 1833, the other in 1842. The revised version has a significantly different ending designed to match Victorian morals regarding the act of suicide.

It is one of the poet’s best-known works, its medieval romanticism and enigmatic symbolism inspired many painters, especially the Pre-Raphaelites.

The Pre-Raphaelites admired Tennyson’s work, and he was among the list of ‘Immortals’ that the young members of the Brotherhood had drawn up in 1848.

A wood engraving by John Thompson was published in 1857, based on Hunt’s drawing. 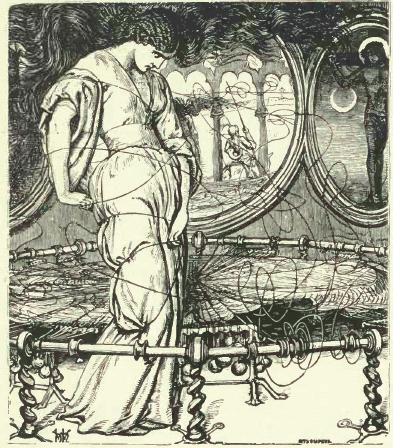 A wood engraving by John Thompson  based on Hunt’s drawing, 1857

A much smaller version at the Manchester Art Gallery was a preparatory study for the larger picture, and it features several differences.

The roundels show the Agony in the Garden and on the left and Christ in Majesty on the right. The frieze consists of a row of standing cherubs.

The Lady of Shalott, Celebrity Version