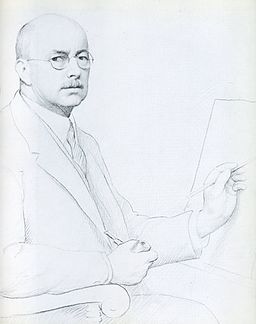 William McGregor Paxton (1869 – 1941) was an American painter who embraced the Boston School paradigm and was a co-founder of The Guild of Boston Artists.

Paxton is known for his portraits, including those of two presidents, and interior scenes with women, including his wife.

“The House Maid” by William McGregor Paxton depicts a woman engrossed in a book and standing behind a table on which a group of still-life objects is displayed. The woman is dressed in a housemaid’s uniform and holds a feather duster under her arm.

The still-life objects include an open stationery box on the left and various East Asian ceramic works. The painting was created in Boston, and the objects echo New England’s long history of trade with Asia.

Arranged on the table are a white Chinese lidded jar, a dark polished vessel, a porcelain Chinese figure, and a Qing dynasty blue-and-white porcelain pot.

The background wall is featureless other than Paxton’s name and the painting’s date, prominently featured in the top left corner.

The composition of Asian objects and a young attractive woman was a typical motif in the early-1900s American painting. 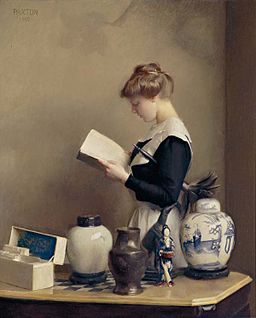 “The Figurine” by William McGregor Paxton depicts a maid carefully cleaning the glass encasing a Chinese porcelain figurine. Next to the glass case is a blue-and-white porcelain pot with gold trim.

The black background wall contrasts with the two gold-trimmed chairs with pink upholstery and the indication of a picture frame and a fireplace stand at the extreme right.

The painting was created in Boston, and the objects echo the region’s history of trade with Asia. It also captures the popularity of Asian decorative wares in America in the early twentieth century. 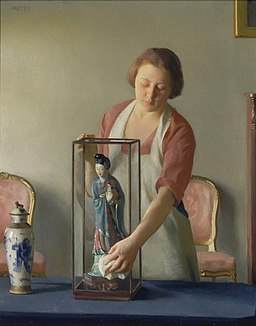 “Tea Leaves” by William McGregor Paxton depicts two fashional women in Boston. The standing woman pours the tea while the seated woman is examining the tea leaves in her cup.

Paxton often depicted wealthy women, such as his patrons’ wives and daughters, at leisure in stylish interiors. His works often present idealized views of women.

He crafted elaborate compositions with models in his studio, using props and aesthetic objects surround them. Paxton was well known for the attention he gave to the effects of light and detail in flesh and fabric.

The background wall has Paxton’s name and the painting’s date, prominently featured in the top left corner. The background includes a Chinese room divider screen with a hint of birds in flight and mountains, but with insufficient detail to detract from the fashional clothes and hat.

Paxton echoed the spirit of the novelist Henry James in novels such as “Portrait of a Lady,” 1881. Paxton and other Boston School artists were inspired by Johannes Vermeer’s portrayal of women in domestic interiors.

Paxton attended Cowles Art School on a scholarship and then went to Paris to study under Jean-Léon Gérôme. He returned to Cowles and met a fellow art student Elizabeth Vaughan Okie. She became Paxton’s student and then his wife.

They traveled to Europe together and often spent their summers on Cape Cod and Cape Ann. They lived in Newton, Massachusetts, and later purchased a house in Newton Center.

Paxton’s wife managed his career and modeled for many of his works; they had no children.

Paxton taught from 1906 to 1913 at the Museum of Fine Arts School in Boston and worked at the Harcourt Street Studios in Boston, and when it burned in 1904, he lost about 100 paintings.

He is primarily known for his portraits and painted two Presidents, both Grover Cleveland and Calvin Coolidge.

He crafted elaborate compositions in his studio, using props with models often of his patrons’ daughters and wives.

“Painting is so difficult that I would give it up if it were not so enjoyable.”
– William McGregor Paxton