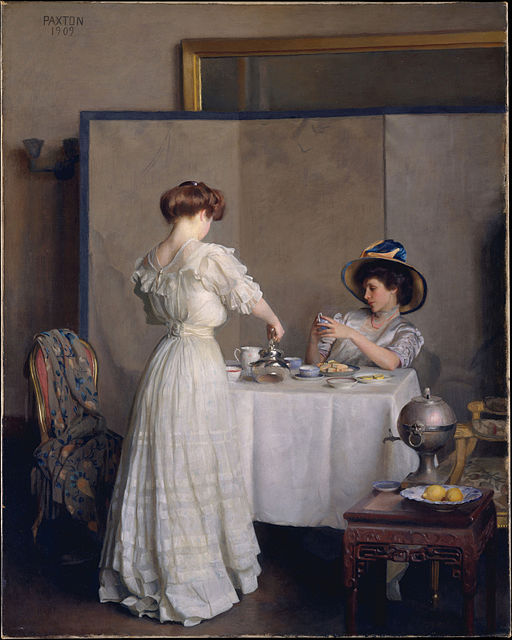 “Tea Leaves” by William McGregor Paxton depicts two fashional women in Boston. The standing woman pours the tea while the seated woman is examining the tea leaves in her cup.

Paxton often depicted wealthy women, such as his patrons’ wives and daughters, at leisure in stylish interiors. His works often present idealized views of women.

He crafted elaborate compositions with models in his studio, using props and aesthetic objects surround them. Paxton was well known for the attention he gave to the effects of light and detail in flesh and fabric.

The background wall has Paxton’s name and the painting’s date, prominently featured in the top left corner. The background includes a Chinese room divider screen with a hint of birds in flight and mountains, but with insufficient detail to detract from the fashional clothes and hat.

Paxton echoed the spirit of the novelist Henry James in novels such as “Portrait of a Lady,” 1881. Paxton and other Boston School artists were inspired by Johannes Vermeer’s portrayal of women in domestic interiors.

Paxton’s palette and precise rendering of figures and setting were influenced by his teacher’s academic tradition in Paris, Jean-Léon Gérôme.

Paxton is one of the key figures in the Boston School of painting and a co-founder of The Guild of Boston Artists.

The Boston School was a group of Boston-based painters active in the early 1900s. Often classified as American Impressionists, they had their own regional style.

They combined  Impressionism with respect for the traditions of Western art history. Their preferred subject matter was portraits, picturesque landscapes, and young women posing in well-appointed interiors.

Tasseography is a fortune-telling method that interprets patterns in tea leaves. The terms derive from the French word “taste” (cup) and the Greek suffixes “logy” (the study of).

Tasseomancy followed the trade routes of tea and coffee and was practiced by Romani Gypsies. Western tasseography can be linked to medieval European fortune tellers.

Anglo Cultures have produced several practitioners and authors on the subject, and English potteries have crafted many elaborate tea cup sets specially designed and decorated to aid in fortune-telling.

William McGregor Paxton (1869 – 1941) was an American painter who embraced the Boston School paradigm and was a co-founder of The Guild of Boston Artists.

Paxton is known for his portraits, including those of two presidents, and interior scenes with women, including his wife.

“Art is to console those who are broken by life.”
– Vincent Van Gogh