A Virtual Tour of Seascape and Maritime Paintings by Winslow Homer

“Eight Bells” by Winslow Homer depicts two sailors determining their ship’s latitude. It is one of Homer’s best-known paintings that dramatically narrates humanity’s relationship to the ocean. This painting was the culmination of a series of oil paintings that Homer made in Maine. Also, several years earlier, Homer, a painted watercolor on his voyage to England that also showed a sailor performing this activity.

“Eight Bells” is a reference to the watch system, computed as one bell every 30 minutes. “Eight bells” can be either 8 o’clock, 12 o’clock, or 4 o’clock.

The two sailors dominate the foreground, and the details of the ship are minimized. Homer shows the figure at left using an octant to take a reading of the sun; the other sailor is reading the altitude of a completed sight on his octant.

In 1887. one year later, Winslow Homer produced an etching based on the painting, in which he further minimized the ship’s rigging and diminished the area of sky, focusing more on the figures. The moment is presented as a heroic image against the treachery and violence of the sea.

“The Gulf Stream” by Winslow Homer 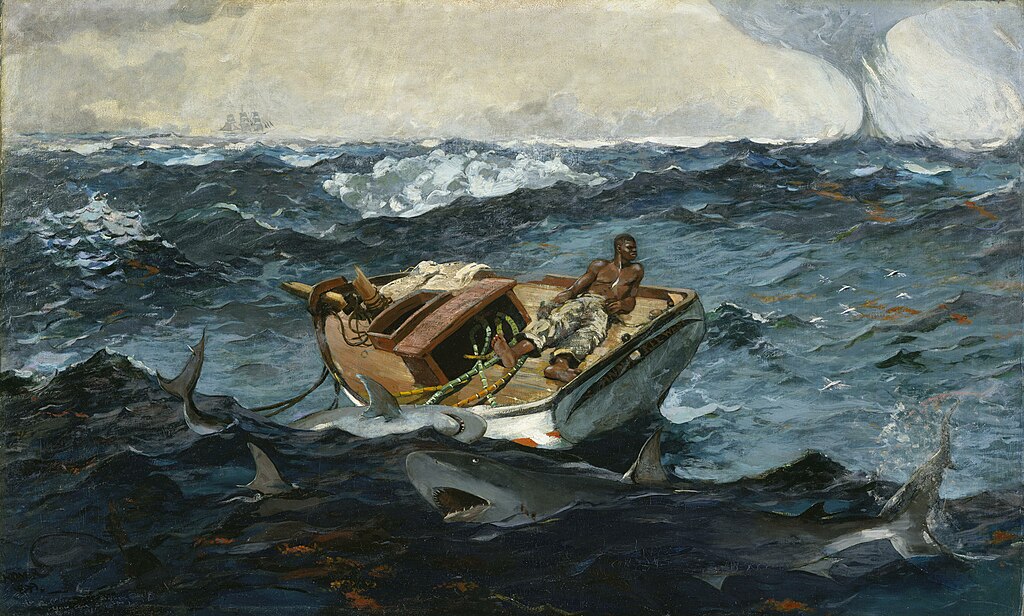 “The Gulf Stream” by Winslow Homer

“The Gulf Stream” by Winslow Homer shows a lone man in a dismasted rudderless boat struggling against the waves of the sea. The marine theme was of interest to Homer for more than a decade as he often vacationed in Florida, Cuba, and the Caribbean. Homer crossed the Gulf Stream many times, and his trips usually inspired several related works. A visit to Nassau and Florida preceded this painting and being the year after the death of his father. It may be revealing his sense of vulnerability.

“The Fog Warning” by Winslow Homer

“The Fog Warning” by Winslow Homer

“The Fog Warning” by Winslow Homer depicts a lone fisherman in a dory who has caught several halibut but now sees fog approaching, threatening to cut him off as he rows back to his ship. He looks over his shoulder as he faces his most challenging task of the day, the return to the main ship. The choppy seas and the high waves show that the journey home will demand all his physical efforts. The scene is psychologically disturbing as the risk of being lost as a result of a sudden fog is very real.

“Breezing Up (A Fair Wind)” by Winslow Homer

“Breezing Up (A Fair Wind)” by Winslow Homer

“Breezing Up (A Fair Wind)” by Winslow Homer is an iconic painting of a father and three boys out for a spirited sail. Homer had a sensibility that allowed him to distill art from potentially sentimental subjects and to create straightforward views of the American life of the period. Homer painted warm and appealing images that appealed to the postwar nostalgia for a simpler, more innocent America. Following a trip to Europe in 1866–1867, Homer adopted a warmer palette and a technique, which owed much to the influence of French artists such as Courbet, Manet, and Monet.

Winslow Homer was best known for his marine subjects and is considered one of the foremost painters in 19th-century America. Mostly self-taught, Homer began his career working as a commercial illustrator. He subsequently took up oil painting and produced significant studio works. He also worked extensively in watercolor, creating a rich legacy, primarily chronicling his working vacations.

Breezing Up (A Fair Wind) 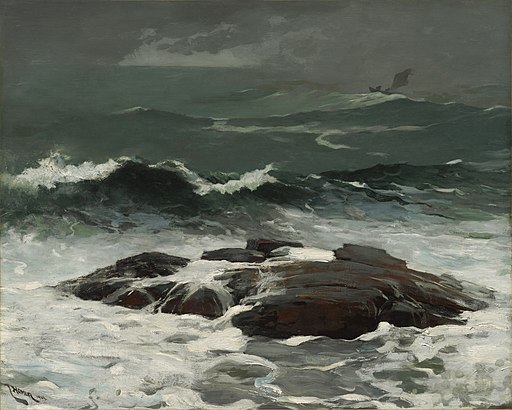 “Summer Squall” by Winslow Homer depicts the foaming water violently surging over and around the flat rock in the foreground. During calm waters, this spot was one of the artist’s favorite fishing locations. The sailboat in the distance dramatizes the human struggle with the forces of nature. A sudden storm that Homer could see from his studio at Prouts Neck, Maine inspired this painting

“The Life Line” by Winslow Homer 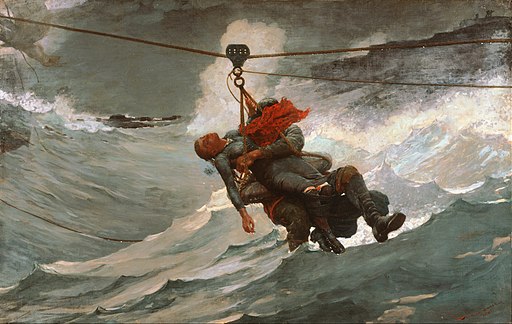 “The Life Line” by Winslow Homer

“The Life Line” by Winslow Homer depicts the dramatic rescue from a foundering ship made possible by a recent innovation, the breeches buoy. Secured to the ship and the shore, the device permitted the transfer of stranded passengers to safety utilizing a pulley.

The painting’s frame is cropped down to its essentials, and the composition focuses on the lifesaving action with massive waves that drench the semiconscious woman and her anonymous heroic savior. Not shown in the composition are the two crew teams on either end, which hauled back and forth the pulley system. The return rope is shown slack in the ocean.

“Summer Night” by Winslow Homer depicts a nocturnal scene by the sea with a sense of poetry and mystery. The light and shade effects blur shapes, while two women dance on the shore. Summer Night expresses this synthesis of Homers Paris experience and the early evolution of his signature style midway between Realism and Symbolism.

“Gloucester Harbor” by Winslow Homer depicts three figures in a rowboat, one rowing and two seated in the stern of the boat. The smaller figure has not been finished and is shown in the sketch form and outline.

Several sailboats are in the background, and beyond them, a strip of land is on the horizon. The sky is filled with pink clouds in a blue sky.

“Sunlight on the Coast” by Winslow Homer

“Sunlight on the Coast” by Winslow Homer

“Sunlight on the Coast” by Winslow Homer depicts the sea’s power with stabs and dabs of his brush representing waves crashing against rocks. Despite the title of this canvas, the sun is struggled to break through the storm. The focus is on the sea with its majestic force hitting the coast.

In 1883, Homer moved to Prouts Neck, Maine, and lived at his family’s estate in the remodeled carriage house seventy-five feet from the ocean. During the rest of the mid-1880s, Homer painted his monumental sea scenes.

Sunlight on the Coast

Winslow Homer (1836 – 1910) was best known for his marine subjects and is considered one of the foremost painters in 19th-century America. Mostly self-taught, Homer began his career working as a commercial illustrator. Winslow Homer started his career as an art reporter during the American Civil War. After the war, the rural world which then prevailed in American painting. After spending time in Paris, Homer experimented with his Impressionist style to develop his signature style midway between Realism and Symbolism.

Quote about the Sea

“To me, the sea is a continual miracle; The fishes that swim, the rocks, the motion of the waves, the ships with men in them. What stranger miracles are there?” – Walt Whitman

“The fishermen know that the sea is dangerous and the storm terrible, but they have never found these dangers sufficient reason for remaining ashore.” – Vincent Van Gogh

“My soul is longing for the secrets of the sea, and the heart of the great ocean sends a thrilling pulse through me.” – Henry Wadsworth Longfellow

“In one drop of water are found all the secrets of all the oceans.” – Kahlil Gibran

“Just as the wave cannot exist for itself, but is ever a part of the heaving surface of the ocean, so must I never live my life for itself, but always in the experience which is going on around me.” – Albert Schweitzer

“The sea, once it casts its spell, holds one in its net of wonder forever.” –  Jacques Yves Cousteau

“Timid men prefer the calm of despotism to the tempestuous sea of liberty.” – Thomas Jefferson

“It is extraordinary to see the sea; what a spectacle! She is so unfettered that one wonders whether it is possible that she again become calm.” – Claude Monet

“If we must not act save on a certainty, we ought not to act on religion, for it is not certain. But how many things we do on an uncertainty, sea voyages, battles!” – Blaise Pascal

“I could never stay long enough on the shore; the tang of the untainted, fresh, and free sea air was like a cool, quieting thought.” – Helen Keller

“There is, one knows not what sweet mystery about the sea, whose gently awful stirrings seem to speak of some hidden soul beneath.” – Herman Melville

“The sea is everything. It covers seven-tenths of the terrestrial globe. Its breath is pure and healthy. It is an immense desert, where man is never lonely, for he feels life stirring on all sides.” – Jules Verne

“When anxious, uneasy and bad thoughts come, I go to the sea, and the sea drowns them out with its great wide sounds, cleanses me with its noise, and imposes a rhythm upon everything in me that is bewildered and confused.” – Rainer Maria

“We are tied to the ocean. And when we go back to the sea, whether it is to sail or to watch-we are going back from whence we came.” – John F. Kennedy

“England, in a way, is lucky. It’s an island, so the frontiers are given by the sea.” – Salman Rushdie

“I have always heard, Sancho, that doing good to base fellows is like throwing water into the sea.” – Miguel de Cervantes

“The sea has never been friendly to man. At most, it has been the accomplice of human restlessness.” – Joseph Conrad

“For whatever we lose (like you or me), it’s always our self we find in the sea.” – E.E. Cummings