Book of the Dead

The “Book of the Dead” is an ancient Egyptian funerary manuscript written on papyrus consisting of magic spells intended to assist a dead person’s journey through the underworld, and into the afterlife.

The original Egyptian name for the text is translated as “Book of Coming Forth into the Light.” It was placed in the coffin or burial chamber of the deceased.

The texts and images in the “Book of the Dead” evolved from the writings of many priests over about 1,000 years. They were used from the beginning of the New Kingdom around 1550 BCE to around 50 BCE.

The “Book of the Dead” was part of a tradition of funerary texts, which includes the earlier texts, which were painted onto objects, not written on papyrus.

There was no single authoritative “Book of the Dead.” The many surviving copies of the  “Book of the Dead” contain a varying selection of religious and magical texts and vary considerably in their illustration.

The “Book of the Dead” was most commonly written in hieroglyphic script on a papyrus scroll and often illustrated with vignettes depicting the deceased and their journey into the afterlife. 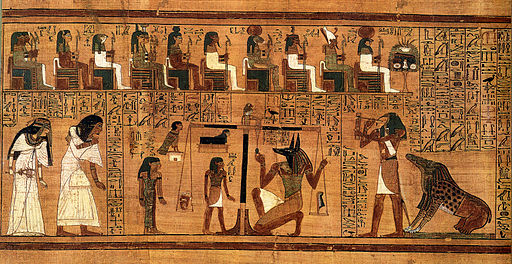 Papyrus of Ani – The Weighing of the Heart

The “Papyrus of Ani” was created c. 1250 BCE, during the nineteenth dynasty of the New Kingdom of ancient Egypt.

It is an individualized book containing declarations and spells to help the deceased in their afterlife, compiled for the Theban scribe Ani.

The Papyrus of Ani image is the “Weighing of the Heart” from the “Book of the Dead” of Ani. On the left, Ani and his wife Tutu enter the assemblage of gods.

At the center, Anubis weighs Ani’s heart against the feather of Maat, observed by the goddesses Renenutet and Meshkenet, the god Shay, and Ani’s ba.

At right, the monster Ammut, who will devour Ani’s soul if he is unworthy, awaits the verdict, while the god Thoth prepares to record it.

At the top are gods acting as judges: Hu and Sia, Hathor, Horus, Isis and Nephthys, Nut, Geb, Tefnut, Shu, Atum, and Ra-Horakhty.

Papyrus of Ani – Book of the Dead

Papyrus of Hunefe – Anubis brings Hunefer into the judgment area.

Hunefer was “Scribe of Divine Offerings,” “Overseer of Royal Cattle,” and steward of Pharaoh Seti I.

This illustration from the “Book of the Dead” of Hunefer can be read from left to right. To the left, Anubis brings Hunefer into the judgment area.

Anubis is also shown supervising the judgment scales. Hunefer’s heart, represented as a pot, is being weighed against a feather, the symbol of Maat.

The ancient Egyptians believed that the heart was the seat of the emotions, the intellect, and the character, and thus represented the good or bad aspects of a person’s life.

If the heart did not balance with the feather, then the dead person was condemned to non-existence, and consumption by the ferocious ‘devourer,’ the beast which is part-crocodile, part-lion, and part-hippopotamus.

Hunefer is next shown to the right, brought into the presence of Osiris by his son Horus, having become ‘justified.’

Osiris is shown seated under a canopy with his sisters Isis and Nephthys. At the top, Hunefer is shown adoring a row of deities who supervise the judgment.

Book of the Dead – Papyrus of Hunefer‎

The Egyptian Book of the Dead: A guidebook for the underworld

A Virtual Tour of Egyptian Art

Ancient Egyptian Book Of The Dead

Book of the Dead Explained

“There is no sin in my body. I have not spoken that which is not true knowingly, nor have I done anything with a false heart. Grant you that I may be like to those favored ones who are in your following”
– Egyptian Book of the Dead