Aquamanile – Water Jugs in the form of Animal and Human Figures

An aquamanile is a pitcher or jug-type vessel in the form of one or more animal or human figures. It usually contained water for the washing of hands over a basin. Upper-class meals and the Christian Eucharist used Aquamanile.

Most surviving examples are in metal, typically brass or bronze, as pottery aquamanilia have rarely survived.

This Aquamanile, which is in the form of an equestrian knight, was a vessel used during the Medieval period. It was an elegant ewer used for the washing of hands over a basin at mealtimes.

This practice was part of both upper-class meals and the Christian Eucharist. This Aquamanile was filled with water through the hole at the top of the knight’s helmet then emptied through the spout in the horse’s head.

This copper alloy vessel is in the form of a knight, seated in the saddled horse, and is turned slightly to the lance side.

The knight’s helmet is flat-topped with a trefoil in relief at the front, and it has slits for the eyes. Covering his protective mail is a surcoat engraved with fleurs-de-lis and stars in a diamond pattern with cross-hatched lines.

The horse’s bridle and breastband are in relief and decorated with rosettes. Missing and lost from this Knight Aquamanile are the lance, shield, lid of the helmet, the feet of the knight, and the horse’s tail.

Persian aquamaniles predate the animal form of aquamaniles found in Europe. The Byzantine Empire’s cultural connections with the east facilitated this form of Aquamanile to be introduced into the Christian Mediterranean world.

The earliest European portable aquamaniles date to the eleventh century. This was the period when ewers and basins were needed in Christian liturgy for the ritual in which the priest washes his hands before vesting.

They were used again before the consecration of the Eucharist and after Mass. The Aquamanile tradition was then taken up enthusiastically by the aristocracy in Europe, where it remained popular until the Renaissance. 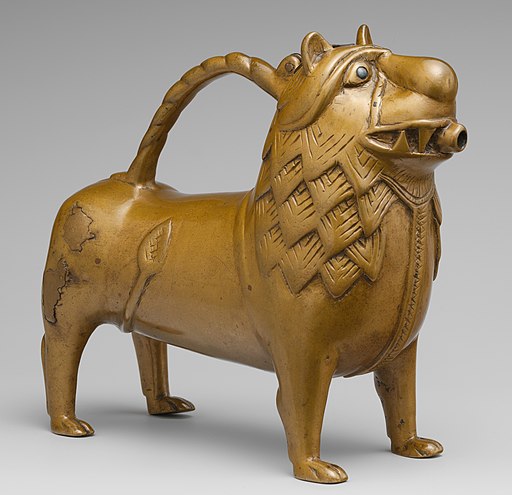 This North German Aquamanile is in the form of a Lion. The lion was associated in the Middle Ages with Christ and was the animal most frequently employed for aquamanilia.

The vessel was filled through the opening at the top of the head, and water was poured from the spout in the mouth.

Aquamanilia, from the Latin words meaning “water” and “hands,” served to pour water over the hands of priests before celebrating Mass and of diners at an aristocratic table. 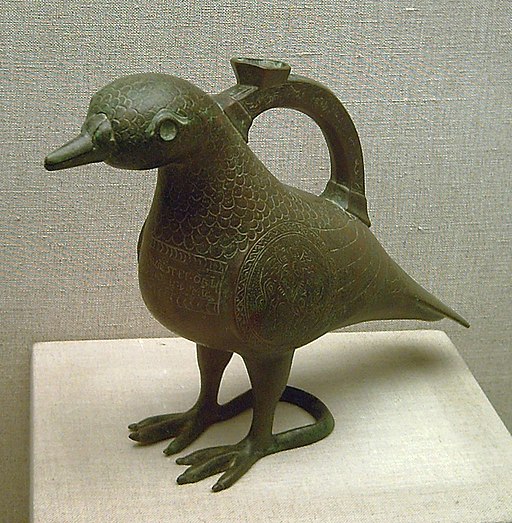 This Islamic Dove-shaped Aquamanile has a beak that is articulated to pour water. This  Islamic artwork was originally made in Iran.

A Christian in Spain probably imported and then inscribed in Hispanic writing in the 12th century.

Medieval Spanish Christians used it for liturgical use in the church. Its use in the Church influenced its later domestic use during meal times by the aristocratic classes.

An Iranian Aquamanile from the Abbasid caliphate, in the form of an eagle, of bronze, inlaid with silver and copper, in the State Hermitage Museum, St. Petersburg, is the earliest dated Islamic object in metalwork.

As Islamic law deprecated the use of such animal forms, the tradition of animal form for utensils died out in the Islamic world.

The tradition was then taken up enthusiastically in Europe, where the form remained popular until the Renaissance.

This Equestrian Knight Aquamanile in the form of a horse and rider exemplifies the courtly ideals of knighthood that permeated Western medieval culture.

The knight holds his feet thrust forward in the stirrups in contrast to the massive body and curves of the horse in this accomplished metalwork sculpture. The type of armor depicted in this Aquamanile disappeared toward the third quarter of the thirteenth century.

Knighthood iconography influenced luxury objects designed for the court. The shield for this Equestrian Knight Aquamanile with a display the arms of the owner and the lance have been lost over the last 800 years.

This Aquamanile was filled with water through the hinged top of the helm, and the horse’s forelock forms the outlet spout.

Aquamanile in the Form of a Lion

Aquamanile in the Form of a Lion

This Aquamanile in the Form of a Lion is an elaborate water vessel used for handwashing. The lion is depicted with a broad-chested, mane, and an open mouth with visible teeth and tongue.

The proud and alert lion was worthy of its image as king of the beasts.

Aquamanile crafting became a specialty of metalworkers in German-speaking lands between the twelfth to the fifteenth centuries.

The craftsman first made a rough clay model and then molded wax around it. The wax was then fully coated with a mixture of clay and ashes before melting the wax. The space created by the melted wax was then filled with molten metal.

Aquamanile in the Form of a Lion – German

Hand Washing in the Western Rite

In the traditional Roman Rite in the Catholic Church, the celebrant washes their hands before vesting for Mass.

In the Middle Ages, the Roman Rite had two washing of hands, one before and one after the offertory. This first one has since disappeared, and the one which remains is the second.

In the new Mass, the celebrant says the prayer:

Hand Washing in the Eastern Rites

In the Eastern Orthodox and Eastern Catholic Churches, the priest says the last six verses from Psalm 26:

After vesting, he washes his hands before approaching the altar of preparation, where he will prepare the bread and wine for the Divine Liturgy.

This lavabo takes place outside of the view of the congregation.

“We consider it a good principle to explain the phenomena by the simplest hypothesis possible.”
– Ptolemy