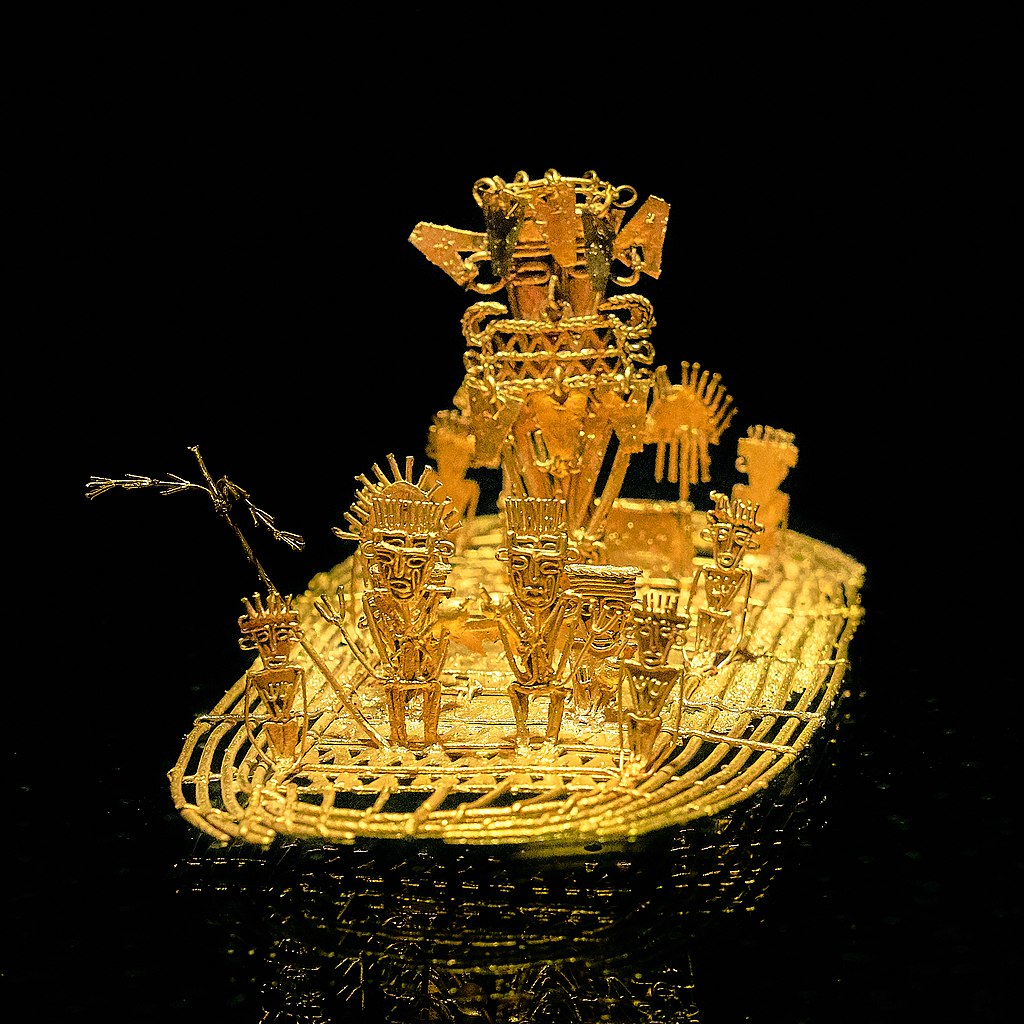 The Muisca Raft, which is also referred to as the El Dorado Raft, is a pre-Columbian gold votive crafted by the Muisca civilization. The Muisca peoples inhabited the Eastern Ranges of the Colombian Andes before the arrival of the Spanish and were an advanced civilization.

This golden raft was created between 600 and 1600 AD by lost-wax casting, using gold with a small amount of copper. The piece has a base in the shape of a log boat with various figures on the raft. The largest figure that stands in the middle represents the chief.

The prominent figure on the raft is “the golden one,” which created the legend of El Dorado. He is adorned with headdresses, nose rings, and earrings, and is surrounded by his soldiers and priests who carry banners.

The ceremony for the investiture of a new Muisca chief, took place at Lake Guatavita, northeast of Bogotá in central Colombia. During this ritual, the new chief’s body was covered with gold dust and washed off in the lake as part of the ceremony. He and his entourage also made offerings of gold and emeralds to the gods.

The Muisca were famous for their goldwork. Although in the Muisca gold deposits were not abundant, the leaders obtained gold through trading. The skilled gold-workings of the Muisca formed the basis for the legend of El Dorado that became widespread among the Spanish conquistadors.

The El Dorado legend eventually drew expeditions into the heart of Colombia, which usually ended with high losses of men.

Farmers found this golden raft in 1969 in a cave near Pasca (Cundinamarca), Colombia, in a ceramic pot, adorned with a human figure whose face has sharp teeth.

El Dorado, which is Spanish for “the golden one,” was the term used by the Spanish Empire to describe a mythical tribal chief of the Muisca people.

The myth started after the Spanish explorers witness the initiation ceremony of a new chief covered in gold dust. The new tribal leader of the Muisca, as an initiation rite, used to cover himself with gold dust and submerge into Lake Guatavita from his raft.

The original narrative was made in the chronicle of Juan Rodriguez Freyle in 1638. According to the chronicle, the chief of the Muisca, in a ritual at Lake Guatavita near present-day Bogotá, was said to be covered with gold dust, which he then washed off in the lake. The leader of the Muisca also offered votive treasures to the goddess in the middle of the sacred lake.

Lake Guatavita, the site of the El Dorado ceremony – Spanish for “the golden one.”

This Muisca ceremony created the famous El Dorado, which has taken so many lives and fortunes. The legends surrounding El Dorado changed over time, as it went from being a man to a city, to a kingdom, and then finally to an empire.

The locations for El Dorado were inferred from rumors, which inspired several unsuccessful expeditions in the late 1500s. In pursuit of the legend, Spanish conquistadors and numerous others searched what is today Colombia, Venezuela, and parts of Guyana and northern Brazil, for the city and its fabulous king.

In the course of these explorations, much of northern South America, including the Amazon River, was mapped. Sir Walter Raleigh also led two of the most famous of these expeditions.

By the beginning of the 19th century, most people dismissed the existence of the city as a myth.

Several literary works and movies have used the name “El Dorado” in their titles.

Tribal Ceremony of the Muisca

In 1638, Juan Rodríguez Freyle wrote an account of the ceremony which stated:

“The ceremony took place at the appointment of a new ruler … During the ceremony which took place at the lagoon, they made a raft of rushes, embellishing and decorating it… They put on it four lighted braziers … all loaded with men and women dressed in fine plumes, golden plaques, and crowns. … they stripped the heir to his skin and anointed him with damp earth on which they placed gold dust … They placed him on the raft … and at his feet, they placed a great heap of gold and emeralds for him to offer to his god.”

Juan Rodríguez Freyle (1566 – 1642) was an early writer born in Bogotá, Colombia. His major work El Carnero is a collection of stories and anecdotes about the early days of colonial Colombia and the demise of the Muisca Confederation. It is one of the most important sources of the sixteenth century colonial period of present-day Colombia.

The Muisca are an indigenous people and culture of the Altiplano Cundiboyacense, Colombia. The early contributors to our knowledge about the Muisca were the Spanish conquistador, priest, and missionaries.

The Muisca Confederation was a loose confederation of different Muisca rulers in the central Andean highlands of present-day Colombia before the Spanish conquest of northern South America.

As one out of four advanced civilizations of the Americas, apart from the Aztec, Maya, and Incas.  The Spanish conquistadors first encountered the Muisca in 1537 at the time of the conquest.

In the centuries before the Spanish conquest, the Muisca were an advanced civilization of mainly farmers and traders. Their economy was based on agriculture, salt mining, trading, metalworking, and manufacturing.

The territory of the Muisca spanned an area of around 25,000 km2 (9,700 sq mi), and at the time of the Spaniard invasion, their territory had a large population. Estimates vary from half a million to up to three million inhabitants.

The Muisca did not construct stone architecture, like the Maya, Aztec, and Inca did. Their houses, temples, and shrines were built with wood and clay.

In modern times, the population of the Muisca has drastically decreased to about 14 thousand Muisca people in Colombia.

How the Golden Raft of El Dorado Was Crafted

El Dorado: The City of Gold Lost in Legend

“As every thread of gold is valuable, so is every moment of time.”
– Proverb