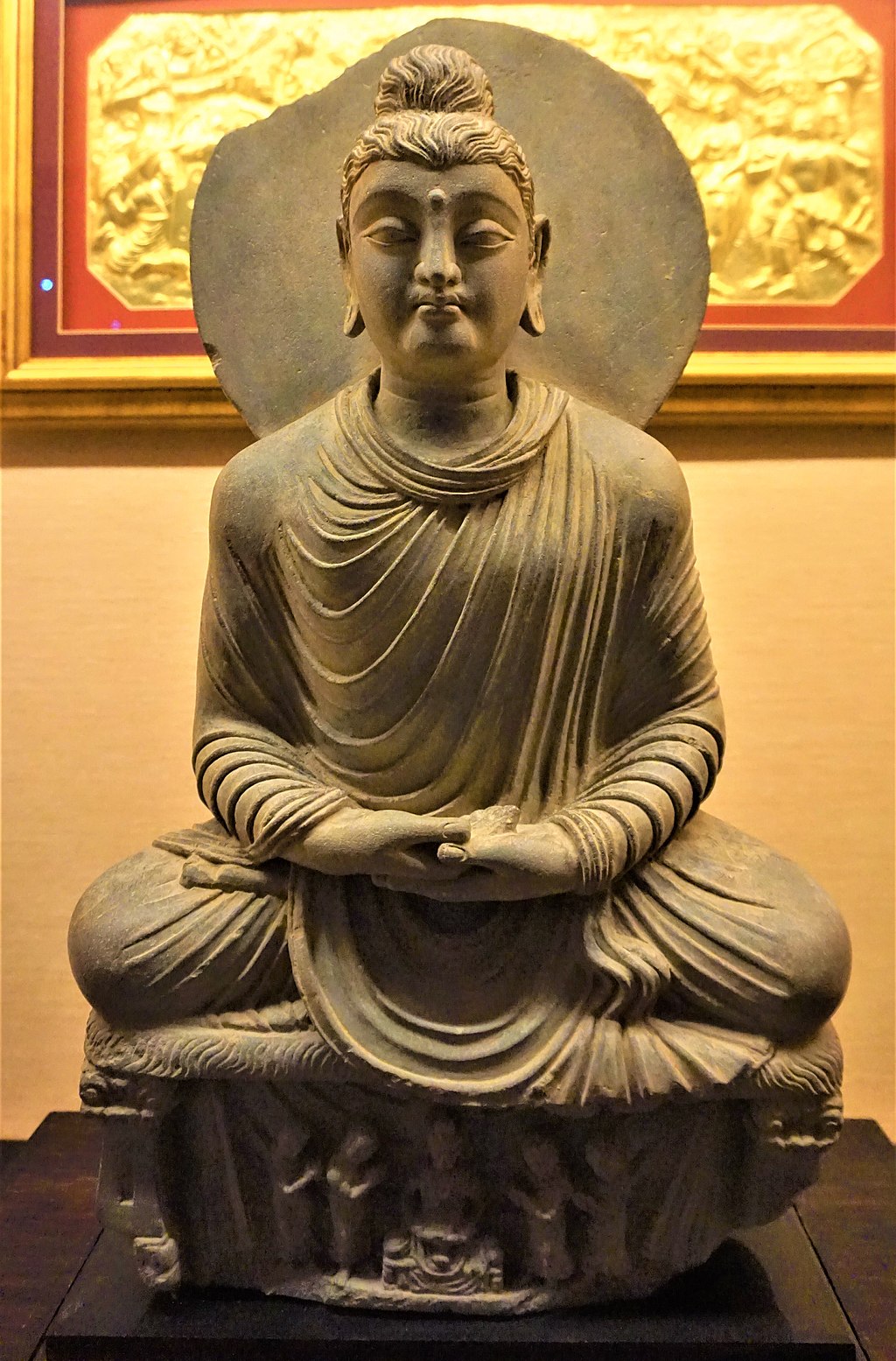 Buddhist Art is the artistic practices that are influenced by Buddhism. Buddhist art originated on the Indian subcontinent following the historical life of Siddhartha Gautama, 6th to 5th century BCE.

After the Buddha, it evolved by contact and interactions with other cultures and artistic traditions as it spread throughout Asia and the world.

Buddhist Art also includes narrative scenes from the lives of Buddhist figures, mandalas, and other graphic aids for the practice of Buddhism, as well as objects used in Buddhist traditions, such as vajras, bells, stupas, and Buddhist temple architecture.

Anthropomorphic representations of the Buddha – The Greek Influence

Anthropomorphic images of the Buddha started to emerge in the 1st century from regions with Greco-Buddhism under the Indo-Greeks.

Greco-Buddhism is the cultural combination of Hellenistic culture and Buddhism, which developed between the 4th century BC and the 5th century AD in Bactria and the Indian subcontinent.

It was a cultural consequence of a long history of interactions that begin with Greek forays into India from the time of Alexander the Great.

The Indo-Greek Kingdoms were Hellenistic kingdoms covering various parts of Afghanistan and the northwest regions of the Indian subcontinent during the last two centuries BC.

A Virtual Tour of Buddhist Art in Museums

As Buddhism expanded outside of India from the 1st century CE, its original forms blended with other artistic influences, leading to a progressive differentiation among the countries adopting the faith.

Northern Buddhist Art was influenced by a northern route that was established from the 1st century CE through Central Asia, Nepal, Tibet, Bhutan, China, Korea, Japan, and Vietnam, where Mahayana Buddhism prevailed.

Southern Buddhist Art was influenced by a  southern route, where Theravada Buddhism dominated and went through Myanmar, Sri Lanka, Thailand, Cambodia, and Laos.

Buddhist Art spread and adapted and evolved in each new host country. Before the spread of Islam and the modern era, Buddhist Art became common in the following areas.

Highlights of Buddhist Art in Museums

Head of a Buddha, Gandharan Style

This Head of a Buddha, in the Gandharan style, depicts the  Buddha with a small mouth, slender nose, and wavy locks of hair. This idealized image bears all the Classical features of the Greek influences on Gandharan sculptures.

The figure’s “Ushnisha,” which is the three-dimensional oval at the top of the head of the Buddha, resembles a topknot of hair.

The first representations of the Buddha in the 1st century CE in the Greco-Buddhist art of Gandhara represent the Buddha with a topknot, rather than just a cranial knob.

It is thought that the interpretation of the “ushnisha” as a supernatural cranial protuberance happened at a later date, as the representation of the topknot became more symbolic, and its original meaning was lost.

In the northwestern region of ancient Gandhara, which covered parts of present-day India, Pakistan, and Afghanistan, artisans working in gray schist or white stucco took their inspirations from Greek sculpture.

This “Walking Buddha” is a three-dimensional sculpture representing the transcendent qualities innovated in the Sukhothai period.

The Kingdom of Sukhothai was an early kingdom in north-central Thailand from 1238 to 1438. Sukhothai is derived from Sanskrit, and means “dawn of happiness.”

This simply clad Buddha figure steps forward in smooth fluid motion with the right hand in the gesture of fearlessness.

This image depicts the Buddha walking back and forth in meditation. This sculpture displays the ideal features and marks that are prescribed in the Buddhist doctrine of the period.

Meditating Buddha Shakyamuni shows Buddha with a chipped halo behind his head in the meditation pose with his right hand in his left palm, both facing upwards.

His legs are crossed, and the feet are resting upturned on the thighs in a traditional posture. He is dedicated with long earlobes and wavy hair, and he has a conventional mark between his eyebrows.

The Buddha was an ascetic and sage on whose teachings Buddhism was founded. He lived and taught mostly in the eastern part of ancient India sometime between the sixth and fourth centuries BCE.

The Mucalinda Sheltering Buddha statue tells the story of the Gautama Buddha, who, while meditating under the Bodhi Tree, had Mucalinda, the mighty King of Serpents, came from beneath the earth to protect him with his hood during an unusually massive storm.

When the great storm had cleared, the serpent king assumed his human form, bowed before the Buddha, and returned in joy to his palace.

This Mucalinda, carved in the 1240s at the historic Srivijayan center of Chaiya, echoes the earlier Srivijayan style from the early Mahayana Buddhist kingdom, which, covered much of the present-day peninsular consisting of Thailand, Java, Sumatra, and Malaya.

The “Buddha Protected by Mucalinda” was created in the 13th century and was discovered in Lopburi at the Wat Na Phra Men, which is located 150 km north of Bangkok, in central Thailand.

This area was a province of Angkor during the 11th – 13th centuries, and its art reflect Khmer as well as earlier Dvaravati influences. Mucalinda is the name of a nāga, a snake-like being who protected the Gautama Buddha from the elements after his enlightenment, and it is a favorite theme in Khmer art.

It is one of the Miracles of Gautama Buddha and was enacted seven years after his enlightenment, in the location of Sravasti.

The Buddha was an ascetic and sage on whose teachings Buddhism was founded. He lived and taught mostly in the eastern part of ancient India sometime between the sixth and fourth centuries BCE.

This Buddha is in the Gandharan or Greco-Buddhist style, and the statue shows influence from Ancient Greek art.

Gandhara had been part of the Greco-Bactrian Kingdom established by Alexander the Great. Gandhāra was an ancient Indic kingdom situated in the northwestern region of Pakistan, around Peshawar.

The statue has borrowed characteristics from Greek sculpture, which influenced Asian sculpture with wavy hair, the defined and rhythmic folds of the robe, and the circular nimbus surrounding the head.

“The Seated Buddha from Gandhara” is a statue of the Buddha discovered at the site of ancient Gandhara in modern-day Pakistan.

Like other Gandharan or Greco-Buddhist art, the sculpture shows the influence of Ancient Greek sculptural art. Gandhara had been part of the Greco-Bactrian Kingdom established by Alexander the Great.

Gandhāra was an ancient Indic kingdom situated in the northwestern region of Pakistan, around Peshawar.

This wooden statue of Avalokiteśvara is a bodhisattva from China’s Song Dynasty of about 960 – 1279. Seated in a position of the “royal ease” with the right hand resting on a bent right knee and the left hand in the gift-granting gesture.

The image is dressed as an Indian prince with long and fluid garments; and with sashes, scarves and jewels.

Bodhisattvas are a favorite subject in Buddhist art and are variably portrayed in different cultures as either female or male. In Chinese Buddhism, Avalokiteśvara has become a somewhat different female figure called “Guanyin.”

Guanyin is an East Asian bodhisattva commonly known as the “Goddess of Mercy” in English. The Chinese name Guanyin is short for Guanshiyin, meaning “[The One Who] Perceives the Sounds of the World.”

This gilt bronze statue of Avalokiteśvara is a bodhisattva who embodies the compassion of all Buddhas.

Sitting in the posture of “royal ease” with the right hand resting on a bent right knee and the left leg hanging over the seat.

The image is dressed as an Indian prince in long and fluid garments with sashes, scarves, and jewels.

This life-size, glazed terracotta sculpture of a seated figure represents a Luohan. A Luóhàn is a Chinese term for an arhat, one of the historical disciples of the Buddha.

As Buddhist tradition developed, the most important were regarded as almost bodhisattvas or fully enlightened beings, with a range of supernatural powers.

The understanding of these Buddhist concepts has changed over the centuries and varies between different schools of Buddhism and different regions.

This gilt bronze statue depicts a Garuda as part bird and part human with flaming hair that bears the symbols of the sun and moon.

The Garuda is a legendary bird creature from Hindu, Buddhist, and Jain mythology. A Garuda is generally a protector with the power to swiftly go anywhere and is ever watchful against enemies.

A Garuda is a part of state insignia in India, Myanmar, Thailand, Cambodia, and Indonesia.

This Garuda was acquired from Tibet, where the main religion is Tibetan Buddhism. In the Buddhist tradition, a Garuda is a golden-winged bird from Buddhist texts.

It is represented with either zoomorphic (animal form) or anthropomorphic (part bird, part human form) iconography.

This gilt bronze figure of Avalokiteśvara is seated in a variation of the position of “royal ease” with the right hand resting on a bent right knee and the left-hand bearing the left shoulder.

Described as a “water moon Guanyin” the figure represents a favorite sculptural formula between the 10th and 14th centuries.

An Avalokiteśvara is a bodhisattva who embodies the compassion of all Buddhas. The image is dressed as an Indian prince with long and fluid garments; and with sashes, scarves and jewels.

The Basic Teachings of Buddha which are core to Buddhism, in a highly simplified form are:

The Three Universal Truths are:

The Eightfold Path consists of Wisdom, Morality, and Meditation.

“Do not dwell in the past; do not dream of the future; concentrate the mind on the present moment.”

“Just as a candle cannot burn without fire, humans cannot live without a spiritual life.”

“No one saves us but ourselves. No one can, and no one may. We ourselves must walk the path.”

“To keep the body in good health is a duty… otherwise we shall not be able to keep our mind strong and clear.”

“Drop by drop is the water pot filled. Likewise, the wise man, gathering it little by little, fills himself with good.”

“If you knew what I know about the power of giving, you would not let a single meal pass without sharing it in some way.”

“To be idle is a short road to death, and to be diligent is a way of life; foolish people are idle, wise people are diligent.”

“Even as a solid rock is unshaken by the wind, so are the wise unshaken by praise or blame.’

Explore and Expand your Understanding

Art of Asia: Buddhism – The Art of Enlightenment

“Thousands of candles can be lighted from a single candle,
and the life of the candle will not be shortened.
Happiness never decreases by being shared.”
– Buddha