“Susanna and the Elders” by Lorenzo Lotto

Susanna and the Elders – Famous Paintings

Susanna and the Elders is a story from the Book of Daniel in the Bible. Susanna was a fair Hebrew wife who was falsely accused by lecherous voyeurs. As she bathes in her garden, two lustful elders secretly spy on the lovely Susanna.

When she makes her way back to her house, they accost her, threatening to claim that she met a young man in the garden unless she agrees to have sex with them.

Susanna refuses to be blackmailed and is arrested and about to be put to death for promiscuity.

Then the young Daniel interrupts the proceedings, shouting that the elders should be questioned to prevent an innocent’s death.

After being separated, the two men are cross-examined about details of what they saw. Their individual testimony was different.

The difference in their two stories makes the elders’ lie plain to all the observers. The false accusers are put to death, and virtue triumphs.

Many famous painters have portrayed the narrative of “Susanna and the Elders.”

A Tour of  Susanna and the Elders Paintings

“Susanna and the Elders” by Lorenzo Lotto

“Susanna and the Elders” by Lorenzo Lotto depicts the story of Susanna from the Old Testament. She was the wife of Joachim, who received her husband’s friends’ advances while taking a bath.

After her refusal, the “Elders” accused her of adultery, but the accusation was false.

Lotto portrayed her naked just before her bath with her clothes scattered around her. The Elders have burst into the bath’s enclosure, followed by two servants called to support their adultery accusation.

The cartouches, showing the character’s dialogue, are used to complement the moral message.

In the upper part of the picture is a view of the garden and a castle within an idyllic landscape.

An earlier scene of the episode is shown in the background, with the woman entering the garden while her two maidens return to the castle.

Lorenzo Lotto (1480 – 1556) was an Italian painter, draughtsman, and illustrator, of the Venetian school.

He painted mainly altarpieces, religious subjects, and portraits. He was active during the High Renaissance and the first half of the Mannerist period.

Still, his work maintained a generally similar High Renaissance style, although the Florentine and Roman Mannerists influenced his later work.

Susanna and the Elders by Francesco Ciseri

Susanna and the Elders by Francesco Ciseri after Guido Reni

The copying of Old Masters was popular, both as a teaching aid and to create copies of famous artworks for an eager market well into the 20th century, especially before the availability of photography.

Susanna and the Elders is a narrative included in the Book of Daniel as chapter 13 by the Catholic and Eastern Orthodox churches.

It is one of the additions to Daniel, considered apocryphal by Protestants. The Church of England lists the story among the books read “for example of life and instruction of manners,” but not for the formation of doctrine.

The story “Susanna and the Elders” is not included in the Jewish Tanakh and is not mentioned in early Jewish literature.

The text was part of the original Septuagint in the 2nd century BC and was revised in the Septuagint text in 150 AD.

Susannah and the Elders by Massimo Stanzione 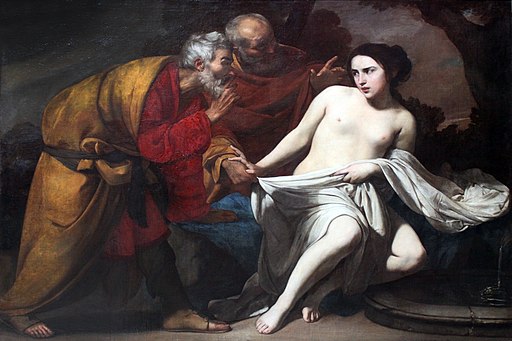 Susannah and the Elders by Massimo Stanzione

“Susannah and the Elders” by Massimo Stanzione combine the sharp contrasts of light and shadow in his painting of the story of the virtuous young heroine who was falsely accused of adultery.

In this painting, Stanzione demonstrates his influence and training with Caravaggio’s follower Giovanni-Battista Caracciolo. He learned to paint using extreme light and dark tones to give the effect of form emerging from shadow.

In the biblical story, Susannah refuses to be blackmailed is arrested for being put to death for promiscuity.

However, the young Daniel, the hero of the biblical Book of Daniel, interrupts the proceedings, shouting that the elders should be questioned to prevent an innocent’s death.

After the Elders are separated, the two men are cross-examined about details of what they saw.

Separately the Elders told different stories about the tree under which Susanna had supposedly met her lover.

The significant difference in size between a mastic and an oak made the elders’ lie plain to all the observers. The false accusers are put to death, and Susannah’s virtue triumphs.

In the bible story, the fate of the elders in Susanna 61, mirrored this fate, they conspired against Susana:

“They took action against the two elders because out of their own mouths, Daniel had convicted them of bearing false witness; they did to them as they had wickedly planned to do to their neighbor.”

Massimo Stanzione (1585 – 1656) was a painter, mainly active in Naples, where he and his rival Jusepe de Ribera dominated the painting scene for several decades.

Most of his work depicted religious subjects. A papal knight, he is often referred to as Cavaliere Massimo Stanzione in older sources.

Susannah and the Elders by Giuseppe Bartolomeo Chiari

Susannah and the Elders by Giuseppe Bartolomeo Chiari

Susannah and the Elders by Giuseppe Bartolomeo Chiari Depicts a married woman spied upon by two elders while bathing in her garden.

They attempt to force themselves upon her, demanding that if she does not submit, they will accuse her of adultery.

This painting depicts the woman trying to escape the advances of the men. Her depiction as a nude woman symbolizes her innocence.

The soft, luminous coloring is typical of the late baroque style, and the theme appealed to male patrons.

Giuseppe Bartolomeo Chiari (654 – 1727) was a painter of the late-Baroque period, active mostly in Rome. French artists frequented his studio, and he became the director of the Accademia di San Luca (1723–25).

The Accademia was founded in 1577 as an association of artists in Rome to promote the work of “artists,” including painters, sculptors, and architects, above that of mere craftsmen.

Daniel is the hero of the biblical Book of Daniel. He was a noble Jewish youth of Jerusalem, who was taken into captivity by Nebuchadnezzar of Babylon.

He served the king and his successors with loyalty and ability until the Persian conqueror Cyrus.

The consensus of modern scholars is that Daniel never existed, and the book is a cryptic allusion to the reign of the 2nd century BCE Greek king Antiochus IV Epiphanes.

However, six cities claim the Tomb of Daniel, the most famous in Susa, in southern Iran.

Daniel is not a prophet in Judaism, but the rabbis reckoned him to be the most distinguished member of the Babylonian diaspora.

In the first few centuries CE, they wrote down the many legends that had grown up around his name.

Susannah and the Elders in Art

The story of “Susannah and the Elders” was frequently painted from about 1470. Susanna is the subject of paintings by many artists.

During the Baroque period, the depictions emphasize the drama. Other representations concentrate on the nude.

Pablo Picasso also painted the subject in the mid-twentieth century, depicting Susanna as a reclining nude with the elders represented as paintings hanging on the wall behind her.

Shakespeare refers to this biblical episode in The Merchant of Venice, where Portia is praised as “A second Daniel” because of her sound judgments.

The story is also in the “One Thousand and One Nights” under the name “The Devout Woman and the Two Wicked Elders.”

Susannah and the Elders

“I am completely trapped.
For if I do this, it will mean death for me;
if I do not, I cannot escape your hands.
I choose not to do it;
I will fall into your hands, rather than sin in the sight of the Lord.”
– Susanna 22–23