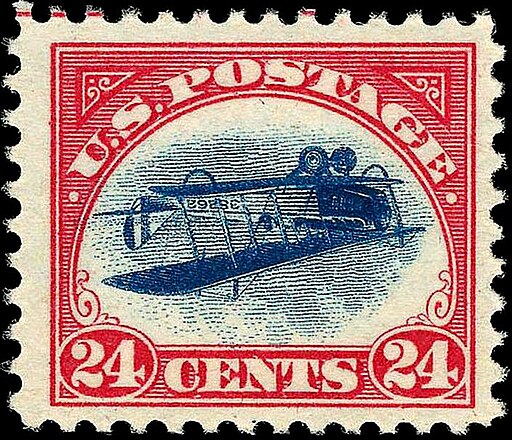 The “Inverted Jenny” is a United States postage stamp issued in 1918, in which the biplane in the design is printed upside-down. It is the most famous error in American postage stamp history.

With a total of about 100 stamps printed with the error, this error is one of the most prized in all philately with auction pricing exceeding $1.5 million.

During the 1910s, the United States Post Office had made several trials in carrying mail by air. These were shown by the first stamp in the world to picture an airplane.

The Post Office set a rate of 24 cents for the service, much higher than the 3 cents for first-class mail of the time, and decided to issue a new stamp just for this rate.

The 24 cent air service stamp was printed patriotically in red and blue, and depicting a Curtiss Jenny JN-4HM, the biplane especially modified for shuttling the mail. The modified model was produced by removing the second pilot seat to create space for mailbags, and by increasing the fuel capacity.

The plane engraved on the stamp, Jenny #38262, was the first plane to depart from Washington to launch the inaugural three-city airmail run.

The job of designing and printing the new stamp was carried out in a great rush to meet deadlines. In sheets of 100, the stamp was printed in two colors. Each sheet had to be placed into the flat-bed printing press twice.

This error-prone process that had resulted in invert errors and at least three misprinted sheets were found during the production process and destroyed. It is believed that only one misprinted sheet of 100 stamps got through unnoticed.

Aware of the potential for inverts, some collectors went to their local post offices to buy the new stamps and keep an eye out for errors.

One collector went to the post office to buy the new stamps, and when the clerk brought out a sheet of inverts, he claimed that:

The postal clerk who sold the sheet later said he did not realize the image was inverted because he had never seen an airplane before.

The “Inverted Jenny” was the main attraction in a Smithsonian National Postal Museum’s ‘Rarity Revealed’ Exhibition and was the most requested postage stamp for viewing by visitors at the museum.

The “Jenny Invert” is so famous in the philatelic community that the complete history of all individual stamp sales has been publicly documented.

The Curtiss JN-4 “Jenny” was one of a series of “J.N.” biplanes built by the Curtiss Aeroplane Company of Hammondsport, New York. The Curtiss JN series was initially produced as a training aircraft for the U.S. Army.

The Curtiss JN-4 became North America’s most famous World War I aircraft. It was widely used during World War I to train beginning pilots, with an estimated 95% of all trainees having flown a JN-4.

It was a twin-seat dual-control biplane. Its tractor propeller and maneuverability made it ideal for initial pilot training.

After World War I, thousands were sold on the civilian market, including one to Charles Lindbergh in 1923, in which he then soloed.

Surplus U.S. Army aircraft were sold for as little as $50, flooding the market. Thousands of surplus Jennys were sold at bargain prices to private owners in the years after the war and became central to the barnstorming era that helped awaken the U.S. to civil aviation through much of the 1920s. 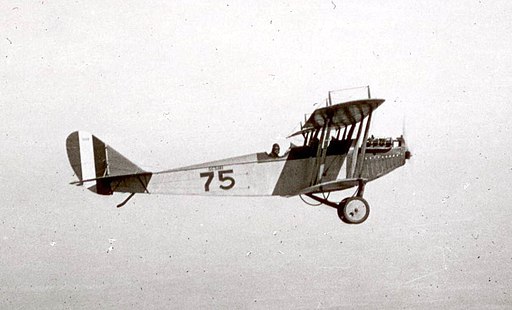 Philately is the study of postage stamps and postal history. It also refers to the collection and research of stamps and other philatelic products.

Philately involves more than just stamp collecting; it is also possible to be a philatelist without owning any stamps. Stamps being studied may be very rare and may reside only in museums.

Since the middle of the 20th century, philately has become the most widespread field of amateur collecting. Its popularity increased with:

In philately, an invert error occurs when part of a stamp is printed upside-down. Inverts are perhaps the most spectacular of postage stamp errors, not only because of their striking visual appearance but because some are quite rare and highly valued by stamp collectors.

A Virtual Tour of Historical Artifact

“Be like a postage stamp. Stick to one thing until you get there.”
– Josh Billings