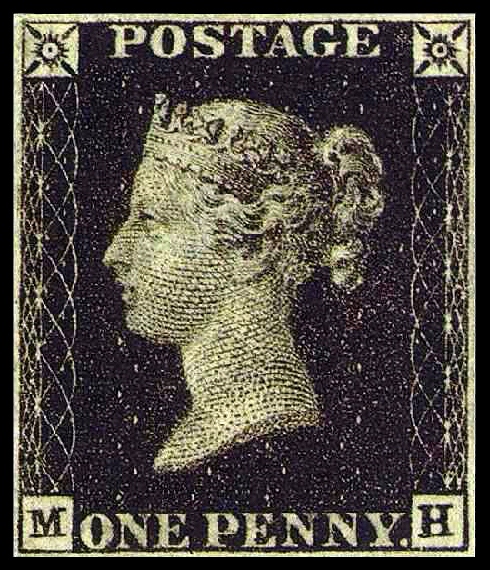 The Penny Black was the world’s first adhesive postage stamp used in a public postal system. It was first issued in the United Kingdom in 1840, and the stamp features a profile of a youthful Queen Victoria.

Before the introduction of the postage stamp, postal rates were expensive and complicated. At the time, the recipient paid the postage on delivery and was charged by the sheet, and the distance traveled.

To simplify matters, an adhesive stamp to indicate the prepayment of postage was introduced. The Penny Black allowed letters of up to 1⁄2 ounce (14 grams) to be delivered at a flat rate of one penny, regardless of distance.

In 1837, it was proposed that both the idea of a pre-paid stamp and a pre-paid envelope be introduced. A two-year contract was awarded to run the new system, and a competition was announced to design the new stamps. There were some 2,600 entries, but none was considered suitable.

A design featuring the recognizable profile of the former Princess Victoria was finally agreed as it was believed this would be difficult to forge. An envelope bearing a reproduction of the design was also issued.

The portrait of Victoria was engraved based on the 1834 cameo-like head, used on a medal to commemorate the Queen’s visit to the City of London in 1837.

This portrait of Victoria remained on British stamps until she died in 1901, although by then, she was 81 years old. All British stamps still bear a portrait or silhouette of the monarch somewhere on the design.

The first stamps did not need to show the issuing country, so no country name was included on them. The U.K. remains the only country in the world to omit its name on postage stamps. The monarch’s image signifies the U.K. as the country of origin.

The dimensions of 3/4 inch by 7/8 inch (19 x 22 mm) were used to accommodate the wording on the stamp. The word “POSTAGE” at the top of the design distinguishes it from a revenue stamp, which had long been used in the U.K.

“ONE PENNY” at the bottom shows the amount pre-paid for the postage of the stamped letter. The background to the portrait consists of finely engraved engine turnings.

A mint block of the Penny Black

Engine turning, also known as jewelling, is an elegant geometric pattern that can be inscribed onto metal as a finish. Engravings produced by engine turning are often incorporated into the design of banknotes and other high-value documents to make the production of forged copies difficult. The resulting graphics are also called guillochés.

The two upper corners hold Maltese crosses with radiant solar discs at their centers. The lower corner letters show the position of the stamp in the printed sheet, from “A A” at the top left to “T L” at the bottom right.

The printed stamp sheets consisted of 240 stamps in 20 rows of 12 columns. The stamps were printed in black ink. The public quickly accepted the postage stamps and rejected the stationery produced at the same time.

The Penny Black, however, lasted less than a year, as a red cancellation was hard to see on the black design, and the red ink was easy to remove, which made it possible to reuse canceled stamps.

In 1841, the Treasury switched to the Penny Red and began using black ink for cancellations instead, which was more effective and harder to remove. 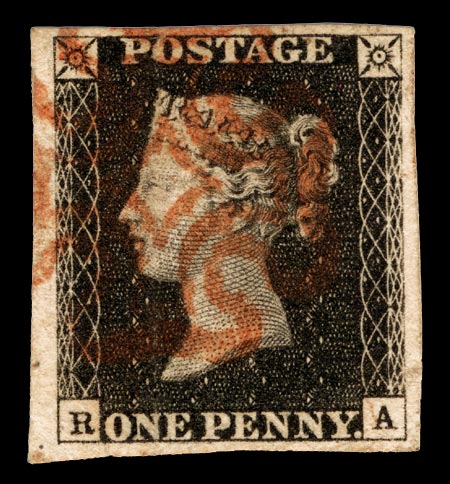 Many people innovated in the reused of stamps by combining the uncancelled parts of two stamps to form an unused whole, so in 1864 as a further safeguard, the top corner stars on the Penny Red were replaced by the lower corner check letters in reverse order.

A two penny stamp printed in blue and covering the double-letter rate (up to 1 oz or 28 g) was issued in 1840.

The entire print run of the Penny Black was a total of 68,808,000 stamps. Many were saved, and in the used condition, they remain readily available to stamp collectors. The British Postal Museum owns the only known complete sheets of the Penny Black.

The Penny Black design is considered a British cultural icon and has featured in British passports the Google doodle of the Penny Black.

A Virtual Tour of Historical Artifact

How The Penny Black Stamp Changed Our World

“Be like a postage stamp. Stick to one thing until you get there.”
– Josh Billings