This gypsum wall panel relief is filled with Assyrian symbolism, and at its center is depicted the Tree of Life or the Assyrian Sacred Tree.

King Ashurnasirpal appears twice, dressed in ritual robes and holding the mace symbolizing his authority. The King stands in front of a Sacred Tree, possibly symbolizing life. Protective spirits are shown on either side behind the King.

King Ashurnasirpal is making gestures of worship to a god in a winged disc. The god, who may be the sun god Shamash, has a ring on one hand; this is an ancient symbol of god-given kingship.

This symmetrical scene was placed behind the royal throne of the King’s Palace in Nimrud. There was another panel relief opposite the main door of the throne room, and similar scenes occupied prominent positions in other Assyrian palaces.

Traces of color pigment was found on the sandals at the time of excavation, consisting of red soles and black uppers. 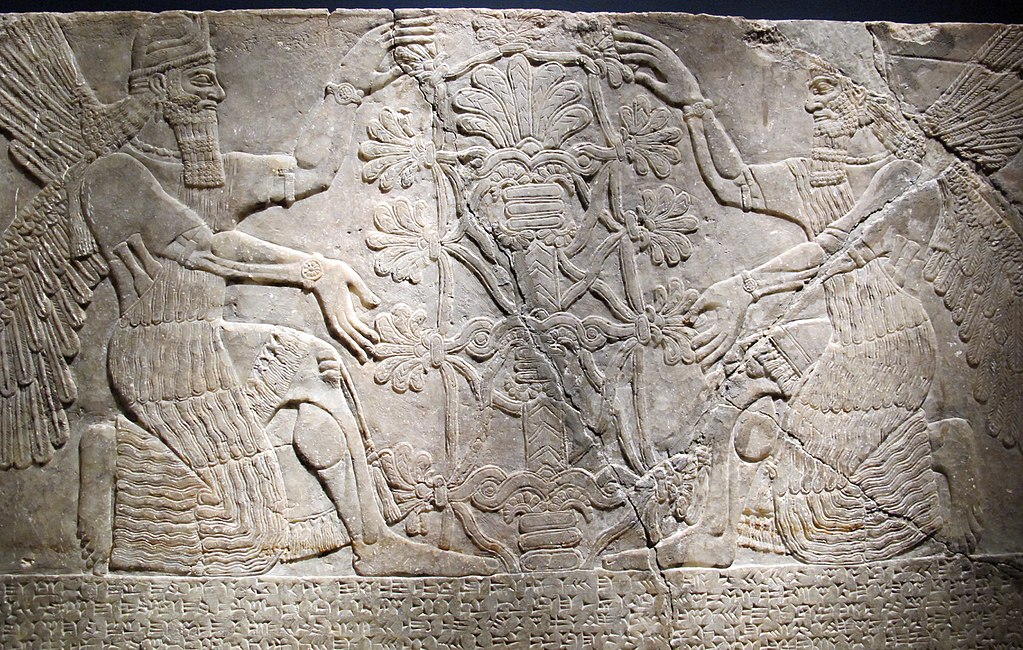 The sacred tree is one of the oldest themes in ancient Near Eastern art. Scholars suggest that the sacred tree symbolized life, while others interpret it as a symbolic representation of the King.

Early depictions of the sacred tree were naturalistic. Later, artists used forms that are more ornamental than real. This depiction of the Assyrian kings depicts the Sacred Tree as a motif rather than a natural tree.

The palmette at the top of the tree has been interpreted to represent the frond or a large, divided leaf of a date palm. The date palm is associated with the goddess Ishtar, a fertility deity and goddess of the date harvest.

The tree of life is a fundamental widespread myth or archetype in many of the world’s mythologies, religious and philosophical traditions. It is closely related to the concept of the sacred tree.

The tree of knowledge, connecting to heaven and the underworld, and the tree of life, connecting all forms of creation, are both forms of the world tree or cosmic tree and are portrayed in various religions and philosophies.

The Assyrian Tree of Life is represented by a series of flowering nodes and crisscrossing vines. It was an important religious symbol, often attended to in Assyrian palace reliefs by human or eagle-headed winged genies or the King.

The King is shown blessing or fertilizing the Sacred Tree with a bucket and cone. Assyriologists have not reached consensus as to the meaning of these symbols. These scenes were also embroidered on royal clothes.

The name “Tree of Life” has been attributed to it by modern scholarship; it is not used in the Assyrian sources. No textual evidence about the symbol is known to exist. 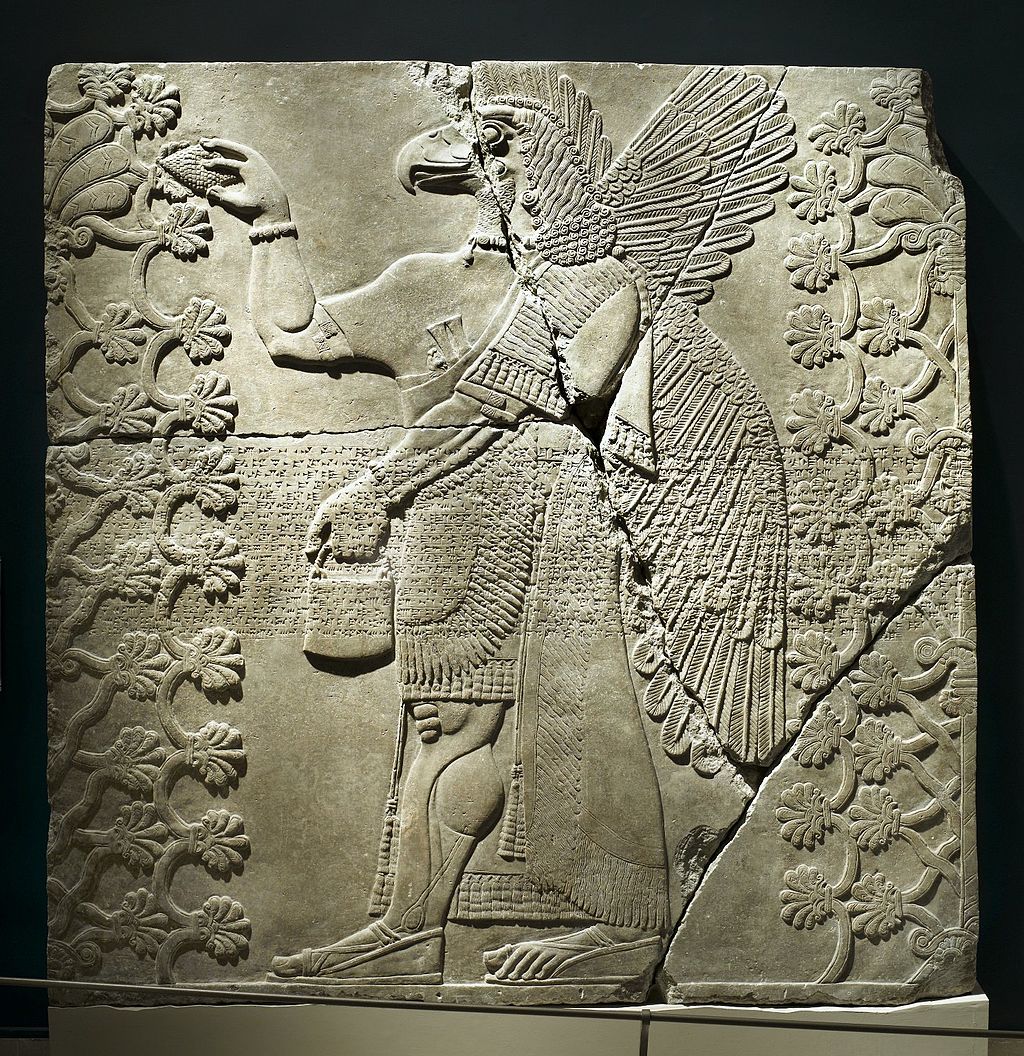 These sculptured reliefs come from Nimrud, which was an ancient Assyrian city located 30 kilometers (20 mi) south of the city of Mosul.

It was a major Assyrian city from 1350 BC to 610 BC. Archaeological excavations at the site began in 1845 and were conducted at intervals between then and 1879, and then from 1949 onwards.

Many important pieces were discovered, with most being moved to museums in Iraq and distributed amongst at least 76 museums worldwide (including 36 in the United States and 13 in the United Kingdom).

In 2015, the terrorist organization the Islamic State of Iraq and the Levant (ISIL) announced its intention to destroy the site because of its “un-Islamic” Assyrian nature. ISIL then used bulldozers to destroy excavated remains of the city with extensive destruction. 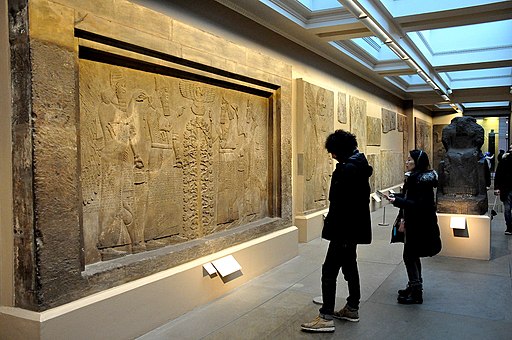 A Sacred Tree is a tree that a community deems to hold religious significance. Sacred trees feature in the historical religious practices of the ancient Greek, Celtic, and Germanic peoples.

Sacred Trees continue to play a role in religious practices in Japan, China, among arctic Altaic peoples, and among the Ghanian Akan. Groups of sacred trees are known as sacred groves. 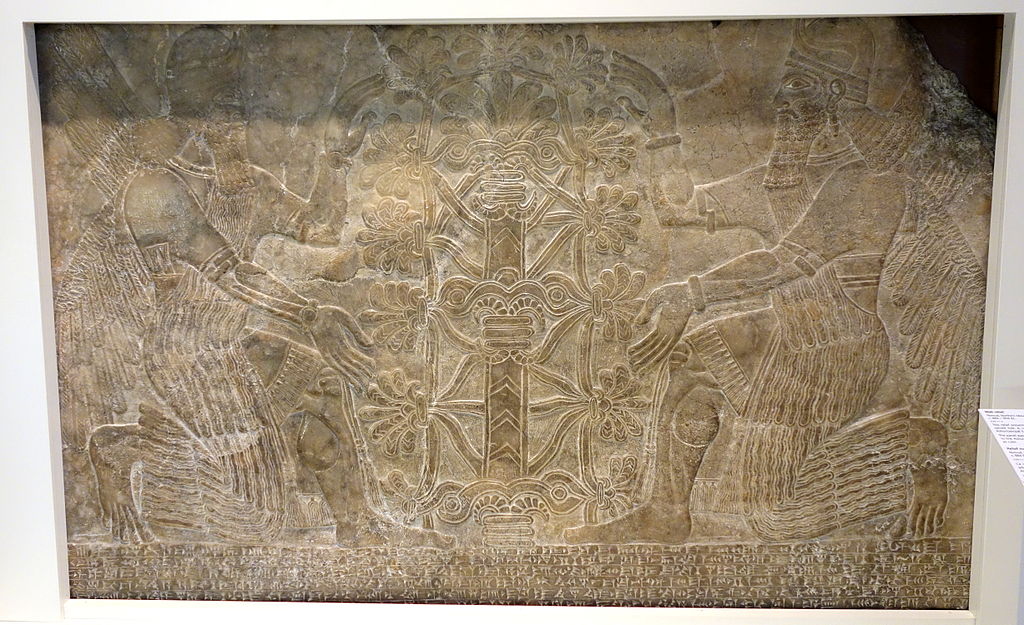 Ashurnasirpal II was King of Assyria from 883 to 859 BC. During his reign, he embarked on a vast program of expansion, first conquering many different peoples to expand his Empire.

The palaces, temples, and other buildings raised by him bear witness to a considerable development of wealth and art.

He was renowned for his brutality, using enslaved captives to build a new Assyrian capital at Kalhu (Nimrud) in Mesopotamia with many impressive monuments.

The relief is from his palace in Nimrud, Northern Mesopotamia, and can be seen at the Royal Ontario Museum.

A Virtual Tour of Mesopotamian Art and Artifact

“Wealth is far away, and poverty is close at hand.“
– Sumerian Proverb