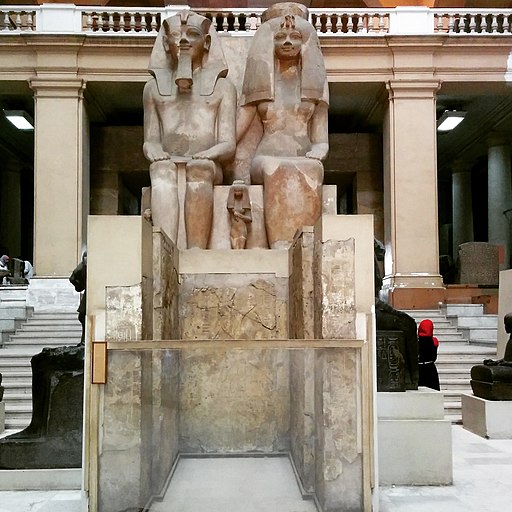 Statue of Amenhotep III and Tiye

This colossal statue of Amenhotep III and Tiye is a group statue of Egyptian Pharaoh Amenhotep III, his Royal Wife Tiye, and three of their daughters.

It is the largest known Ancient Egyptian family group ever carved. The almond-shaped eyes and arched eyebrows of the figures are of typical late 18th dynasty style.

Amenhotep III wears the “nemes headdress” with the cobra, a false beard, and a kilt, and he is resting both his hands on his knees. Queen Tiye is sitting on his left, with her right arm placed around her husband’s waist.

Her height is equal to that of the pharaoh, which shows her prominent status. She wears an ankle-length, close-fitting dress and a big wig with a vulture headdress.

The three smaller figures depict the three of their daughters. One of the Princess is standing in the center between her parent’s legs.

She is depicted as a grown woman in a close-fitting dress and a full wig with modius and plumes. To the far left of Amenhotep’s legs stands the figure of a younger daughter, while to the far right of Tiye’s legs stands another princess.

The two Princesses on the sides of the sculpture are both damaged and are visible only from the sides.

The statue originally stood in Medinet Habu, Western Thebes, and today it is the centerpiece of the main hall of the Egyptian Museum in Cairo.

Amenhotep III ruled Egypt from about 1386 to 1349 BC, and his reign was a period of unprecedented prosperity and artistic splendor when Egypt reached the peak of its international power.

When he died in the 38th year of his reign, his son initially ruled as Amenhotep IV, but then changed his royal name to Akhenaten.

Nemes Headdress: A “nemes” is a piece of striped headcloth worn by pharaohs in ancient Egypt.

It covered the whole crown and back of the head and nape of the neck and had lappets, two large flaps which hung down behind the ears and in front of both shoulders. 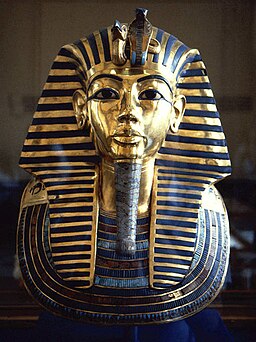 Tutankhamun is wearing the “Nemes” headdress and “Uraeus.”

Uraeus: The Uraeus is the stylized, upright form of an Egyptian cobra, used as a symbol of sovereignty, royalty, deity, and divine authority in ancient Egypt.

Tutankhamun’s mummy features a uraeus, the cobra image with the vulture image representing the unification of Lower and Upper Egypt.

False Beard: A fake beard was a sign of sovereignty and was worn by queens and kings.

The beard was held in place by a ribbon tied over the head and attached to a gold chin strap, a fashion that existing from about 3000 to 1580 BC.

Modius headdress:  The modius is a flat-topped cylindrical headdress or crown found in ancient Egyptian art and art of the Greco-Roman world.

A tall modius is part of the elaborate headdress used for portraits of Egyptian queens.

Statue of Amenhotep III and Tiye

A Tour of the Museum of Egyptian Antiquities

A Tour of Egyptian Art

“For the benefit of the flowers, we water the thorns, too.”
– Egyptian Proverbs