Tutankhamun’s mask is the funerary mask of Tutankhamun, the 18th-dynasty Ancient Egyptian Pharaoh who reigned 1332–1323 BC.

It was discovered by Howard Carter in 1925 and is now housed in the Egyptian Museum in Cairo. This mask is one of the most well-known works of art in the world.

Tutankhamun’s burial chamber was found in the Valley of the Kings in 1922 and opened three years later.

It would be another two years before the excavation team, led by the English archaeologist Howard Carter, was able to open the massive sarcophagus containing Tutankhamun’s mummy.

On 28 October 1925, they opened the innermost of three coffins to reveal the gold mask, seen by people for the first time in about 3,250 years. Carter wrote in his diary:

“The penultimate scene was disclosed
– a very neatly wrapped mummy of the young king,
with a golden mask of sad but tranquil expression,
symbolizing Osiris … the mask bears God’s attributes,
but the likeness is that of Tut.Ankh.Amen
– placid and beautiful, with the same features as we find upon his statues and coffins.” 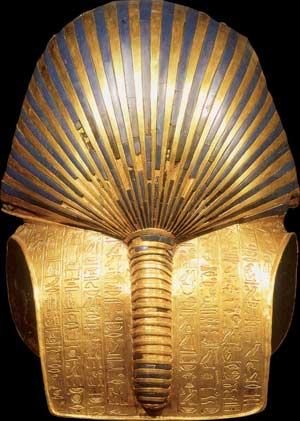 The mask is composed of two layers of high-carat gold, varying in thickness. X-rays revealed that the mask has two alloys of gold: a lighter 18.4-karat shade for the face and neck, and 22.5-karat gold for the rest of the mask.

The face represents the pharaoh’s standard image, and the same image was found by excavators elsewhere in the tomb, in particular in the guardian statues.

He wears a nemes headcloth, topped by the royal insignia of a cobra and vulture, symbolizing Tutankhamun’s rule of both Upper and Lower Egypt.

The death mask in its original place, 1925

The gold mask is featured with inlays of colored glass and gemstones, including lapis lazuli for the eye surrounds and eyebrows.

The thin gold beard is inlaid with blue lapis lazuli to give it a plaited effect.

Tutankhamun (1342 – 1325 BC) was an ancient Egyptian pharaoh who was the last of his royal family to rule during the end of the 18th dynasty during the New Kingdom of Egyptian.

His father was the pharaoh Akhenaten, who is noted for abandoning traditional Egyptian polytheism and introducing worship centered on the Aten. Tutankhamun is thought to mean; “Living image of Aten.”

Tutankhamun took the throne at eight or nine years of age under the unprecedented viziership of his eventual successor, Ay. He married his half-sister Ankhesenamun. During their marriage, they lost two daughters.

Tutankhamun restored the Ancient Egyptian religion after its dissolution by his father, enriched and endowed the priestly orders of two important cults, and began restoring old monuments damaged during the previous Amarna period.

Tutankhamun was physically disabled with a deformity of his left foot along with bone necrosis that required the use of a cane, several of which were found in his tomb.

He had other health issues, including scoliosis, and had contracted several strains of malaria.

With over 5,000 artifacts, it sparked a renewed public interest in ancient Egypt, for which Tutankhamun’s mask remains a famous symbol.

The deaths of a few involved in the discovery of Tutankhamun’s mummy have been popularly attributed to the curse of the pharaohs.

Recent Research in Egyptian Art: Behind the Mask of Tutankhamun

The Discovery of KING TUT – The Gold Mask

A Tour of the Museum of Egyptian Antiquities

Tutankhamun’s restored beard is back on display in Egypt

Why Were Mummified Babies Found in Tutankhamun’s Tomb?

“For the benefit of the flowers, we water the thorns, too.”
– Egyptian Proverbs