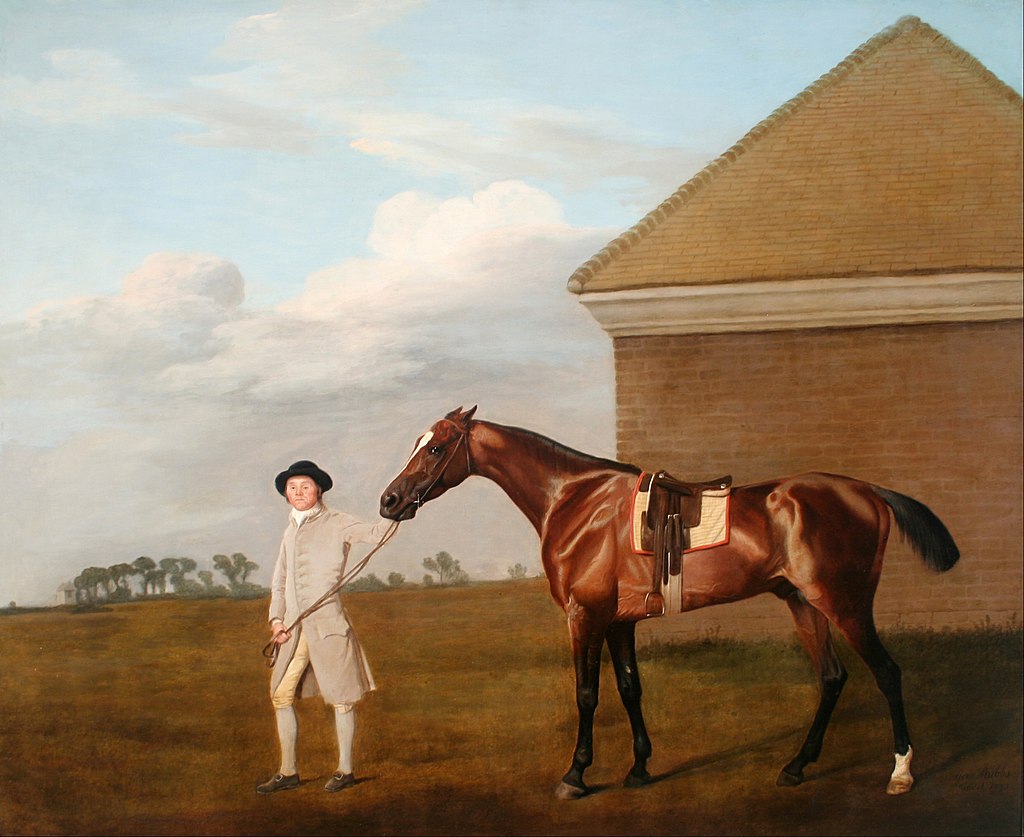 “Firetail with his Trainer” by George Stubbs

“Firetail with his Trainer by the Rubbing-Down House on Newmarket Heath” by George Stubbs shows the horse Firetail with rippling muscles at the hight of his career in 1773.

The élite in Britain in the 18th century were horse racing fanatics, and there was a growing demand for a victorious horse to have their portraits painted by George Stubbs.

Stubbs was successful in capturing the individuality of the animals, a skill he developed by his extensive study of horses and their anatomy.

This painting’s focus is on the famous racehorse. The background is composed of an expanse of sky and the Rubbing-Down House on Newmarket Heath.

The trainer is not shown with any distinctive personality; the racehorse has absorbed all of Stubbs’s skills and attention. Firetail could be easily identified with its white dash down its nose and another on its right back leg.

Thoroughbred racing has become and remains popular with aristocrats and royalty of British society, earning it the title “Sport of Kings.”

There are many dangers in horse racing for both horse and jockey. A horse can stumble and fall, exposing both rider and horse to the threat of being trampled and injured.

Horses also face significant risks in racing. It is estimated that thousands of horses died at racetracks every year across the world. There is speculation that drugs used in horse racing are also responsible for the high death rate.

George Stubbs was best known for his paintings of horses. His most famous work is probably Whistlejacket, a picture of a prancing horse which, together with two other Stubbs’s paintings, breaks with convention in having plain backgrounds.

Throughout the 1760s, he produced a range of individual and group portraits of horses, sometimes accompanied by hounds.

Stubbs also painted more exotic animals, including lions, tigers, giraffes, monkeys, and rhinoceroses, which he was able to observe in private menageries.

He became preoccupied with the theme of a wild horse threatened by a lion and produced several variations on this theme.

These and other works became well known at the time through engravings of his work, which appeared in the 1770s and 1780s.

Horse racing is one of the most ancient of all sports, as its basic premise, to determine which of two or more horses is the fastest over a set course or distance, has been unchanged since at least classical antiquity.

It also played an integral part in myth and legend, such as the contest between horses in Norse mythology.

Chariot racing was one of the most famous ancient Greek, Roman, and Byzantine sports. Both chariot and mounted horse racing were events in the ancient Greek Olympics by 648 BC and were prominent in the other Panhellenic Games.

In the Roman Empire, chariot and mounted horse racing were major industries. Historically, equestrians honed their skills through games and races.

Equestrian sports provided entertainment for crowds and displayed the excellent horsemanship needed in battle. Horse racing of all types evolved from impromptu competitions between riders or drivers.

The various forms of competition, requiring demanding and specialized skills from both horse and rider, resulted in the systematic development of specialized breeds and equipment for each sport.

The popularity of equestrian sports through the centuries has resulted in the preservation of skills that would otherwise have disappeared after horses stopped being used in combat.

George Stubbs: A collection of works