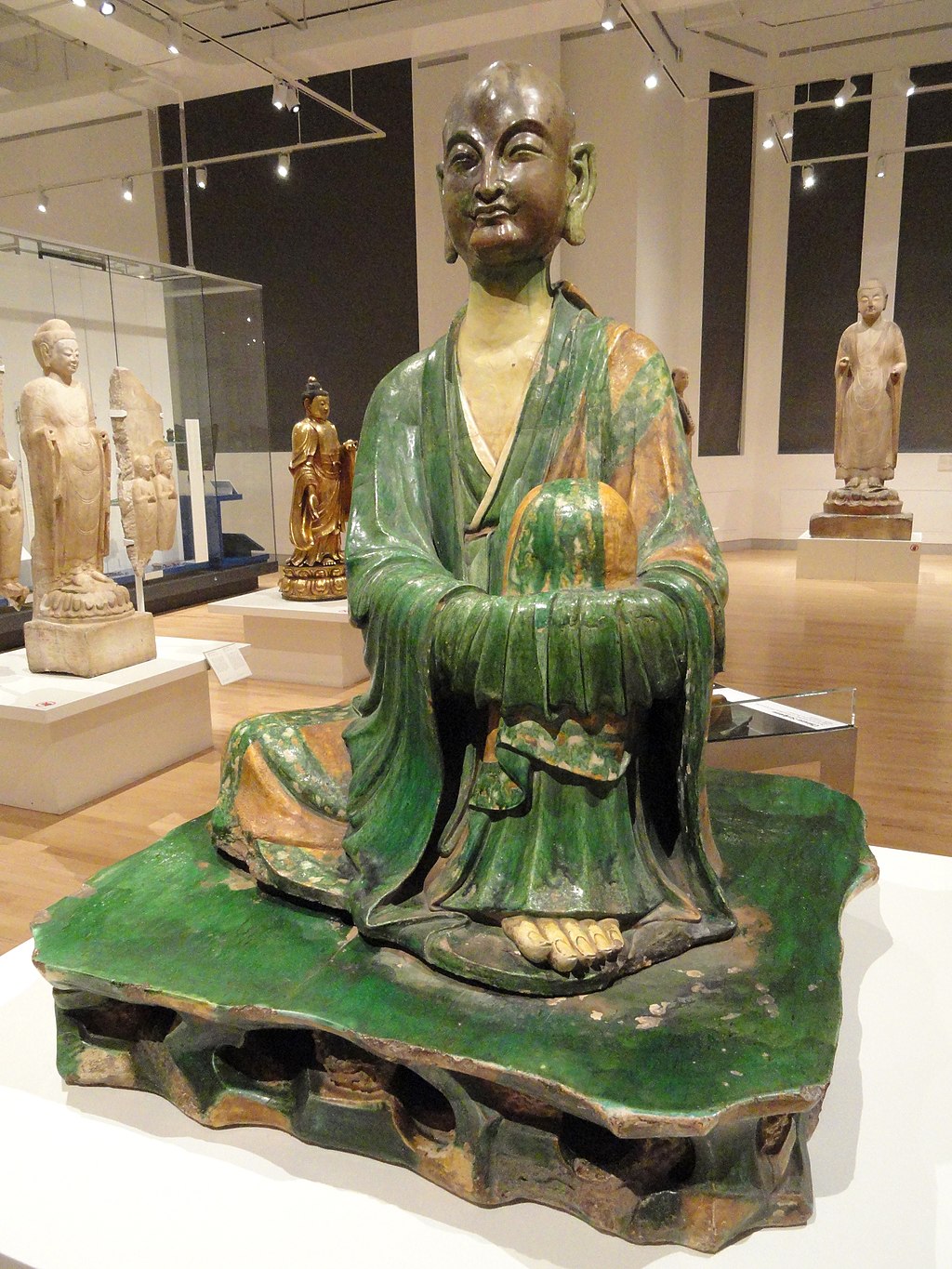 This life-size, glazed pottery sculpture represents a Luóhàn, which is a Chinese term for one who has gained insight into the true nature of existence and has achieved nirvana.

This sculpture of Luohan shows him seated and hugging his left knee, wearing a monk’s robes of green and brown.

They reached the international art market and were bought for Western collections. The circumstances of the find and the details of how the figures entered the global art market are vague.

The surviving Lohans from this discovery are so individually and uniquely modeled that they are considered as portraits of different eminent monks.

The openwork base is intended to suggest a mountain retreat of the ascetic monk. This large glazed ceramic figure extended to Buddhism the tradition of modeling developed for Chinese pottery tomb figures.

In the Ming and Qing periods imposing representations of many different deities were made, and their brilliant glazing resembles that of figures decorating temple buildings.

The statues are assembled from several pieces of glazed terracotta with their bases made separately and using a combination of molded and freely formed “slab-constructed” sections.

They use the complicated multi-color glazing process, which requires two firings.

Luóhàn which is a Chinese term for an arhat. An Arhat is one who has gained insight into the true nature of existence and has achieved nirvana.

Different Buddhist traditions have used the term for people far advanced along the path of Enlightenment, but who may not have reached full Buddhahood.

The understanding of the concept has changed over the centuries and varies between different schools of Buddhism and other regions.

As Buddhist tradition developed, and especially in the East Asian Buddhist countries, the number of arhats or Luohans tended to increase.

At least the most important were regarded as, or as almost, bodhisattvas or fully enlightened beings, with a wide range of supernatural powers.

According to Buddhist tradition, groups of Luohans awaited the arrival of Maitreya, the Future Buddha, and groups of Luóhàn were often used in East Asian Buddhist art.

A Tour of Buddhist Art

“A man grows most tired while standing still.”

“Dig the well before you are thirsty.”

“To understand your parents love you must raise children yourself.”

“It is better to light one candle than to curse the darkness.”

“Control your emotions, or they will control you.”

“When the winds of change blow, some people build walls, and others build windmills.”

“Tell me, I forget. Show me, I remember. involve me, I understand.”

“Be not afraid of growing slowly; Be afraid only of standing still.”

“Learning is a treasure that will follow its owner everywhere.”

“One generation plants the trees. Another gets the shade.”

“Behave toward everyone as if receiving a guest.”

“A wise man makes his own decisions. An ignorant man follows public opinion.”

“All things are difficult before they are easy.”

“A crisis is an opportunity riding the dangerous wind.”

“It’s better to be without a book than to believe a book entirely.”

“Judge with seven reasons, state only one in court.”
– Chinese Proverb

Photo Credit: 1) By Daderot [CC0 or CC0], from Wikimedia Commons